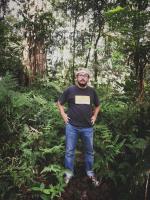 Gustaff H. Iskandar graduated from the Department of Fine Arts, Faculty of Art and Design, Institut Teknologi Bandung (FSRD – ITB) in 1999. After finishing his studies, Gustaff was active in the arts management field, in addition to writing and participating in various art projects and exhibitions. He founded the Bandung Center for New Media Arts in 2001, where he engages in research and development of media arts and multidisciplinary artistic practice in Bandung, Indonesia. The organisation was later changed to a non-profit organisation known as Common Room Networks Foundation (Common Room) in 2003, and became an open platform for arts, culture and ICT/ media in 2009. From its inception, Common Room has been committed to maintaining a space for freedom of expression and civic empowerment, including through the nurturing of an urban-rural collaboration platform in the local and global context.