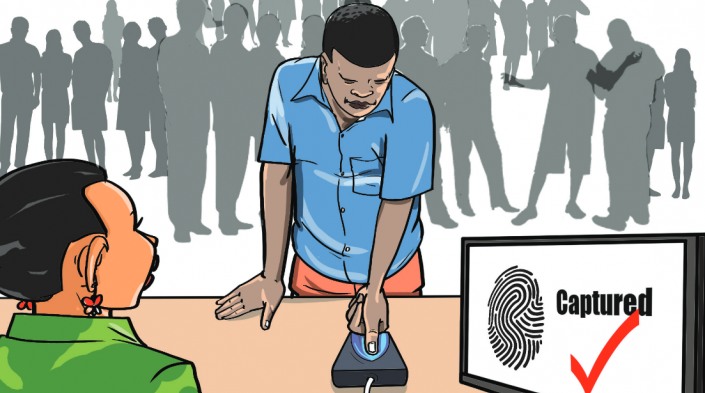 The new preliminary report "Uganda’s Digital ID System: A cocktail of Discrimination" by Unwanted Witness presents findings of a study that seeks to establish the impact of a national identity card system in Uganda (commonly known as “Ndaga Muntu”) on people’s economic, social and cultural rights (ESCRs), in relation to the state's obligations to provide services. A random sample of 76 respondents was obtained (53% male and 47% female). Data was collected using qualitative and quantitative tools and was analysed using Excel and Stata software.

From the findings, 25% of male and 13% of female respondents were uncomfortable with sharing a lot of personal information before getting the ID. Information relating to ethnicity, tribe, parents details, TIN number, occupation, address and spouse details were considered to be an invasion of their privacy as well as a ploy by government to spy on them.

The greatest level of data insecurity and mistrust was among those aged over 50 and under 30 years. The reason given for this was that there were high chances of data misuse, bribery and data hacking. Among the sampled respondents, most had no problem with their data written on the front and the back of the card, although they wanted a phone number added on the ID for easy contact in case it was lost or in case of an emergency.

Out of the total population sampled, only 12% of respondents had obtained their National IDs at the time of the study. A proportion of 88% had submitted their registration forms but had not received their National IDs, having waited for a period of over six months.

However, among the respondents that were interviewed, 72% revealed that they were required to present a National ID before receiving a private service. A few mentioned that they were required to present a village council card, passport, driving permit or employee ID, but for registration of a SIM card, no alternative was given but strictly a National ID. Those denied access to private services totalled 80%.

In order to access public services such as health care, agricultural inputs (seedlings and piglets, among others) and mosquito nets, 70% of the respondents said that they were required to present a National ID, and 85% of these respondents were denied a public service.

The Parliament of Uganda should review section 66 of the Registration of Persons Act, 2015, and forthwith suspend pre-conditioning the enjoyment of basic fundamental freedoms and rights to a National ID until the National Identification and Regulatory Authority (NIRA) has the full capacity to deliver on its mandate.

The government should strengthen the human, financial and technical resources of NIRA to enable efficiency and effective execution of the agency’s mandate of providing National ID to Ugandans in a timely manner.

The government, civil society actors and development partners should create open space for citizens’ engagement to ensure inclusivity of citizens’ voices in the implementation of the ID system and minimise its negative impact on human rights. The Ministry of Internal affairs should undertake an open nationwide consultation on the National ID programme to address public concerns associated with its implementation.

The government should enhance transparency around the National ID system, including fully disclosing the planned future scope and uses of the programme, and instituting a policy to mandate the disclosure of any data breaches, including to any individuals impacted. It is evident that the National ID is slowly becoming the only legally acceptable national identification document, which is sadly limiting the enjoyment of basic fundamental rights in Uganda, and in the process exacerbating exclusion, inequality and discrimination, especially among the underprivileged members of society.

This report was produced with the support of the Association for Progressive Communications (APC) through a subgrant made possible by the Swedish International Development Cooperation Agency (Sida),