Safety, agency and surveillance: An exploration of sexual expression and digital spaces in Bangladesh

Home / Publications / Safety, agency and surveillance: An exploration of sexual expression and digital spaces in Bangladesh 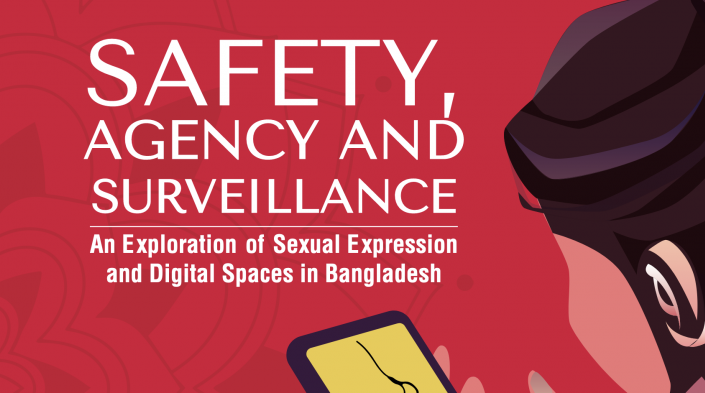 The idea of “protection” dominates public discourse on sexual expression and gender equity in Bangladesh, and this also extends to how online spaces are understood and regulated. There is always somebody to save, to protect, to be cocooned off from the dangers out there, but such safety measures, whether legal or policy instruments or more amorphous cultural and public discussions, are often paternalistic and disciplinarian. It is also not incidental that despite or perhaps because of these currents, violence against and isolation of people such as sex workers, trans people and other gender and sexual minorities, and women without (or even with) the privileges of religion, class or ethnicity continues apace.

Often so-called protective measures and surrounding discourse come down heavily on the side of punitive measures, and restrictions on dissent and transgression, which includes sexual expression. That is because those with power (e.g. state institutions) wield enormous authority to dictate the terms, which can be self-serving and leave those who need support more vulnerable and without any recourse.This also relates to who has and can have a stake in a space, public or private, digital or physical, the boundaries of which are supple and constantly shifting.

On the other hand, it is also important to explore the limits of “freedom of expression” or “rights” in these circumstances, because they are inadequate tools for a truly emancipatory politics. Consider, for example, when freedom of expression becomes an excuse to engage in racism, misogyny, trans- and homophobia, xenophobia and other kinds of bigotry. Against these twin and limiting horizons of possibility – overly paternalistic measures or freedom as continuation of an untenable status quo – this study is interested in cleaving its way towards an alternative, however introductory and imperfect that may be. Surveillance and systemic and built-in inequities and biases notwithstanding, online spaces also afford escape, community building, connection and livelihood to many. This recognition of the internet as offering a spectrum of opportunities is not to hedge on its potential, but to explore and understand what this shifting space offers its users and how we might transfigure its boundaries, terms and terrain.

This exploratory study presents a snapshot of the digital economy, how online spaces are navigated, and how that correlates with our understanding of sexual expression and autonomy. Using a qualitative method, this analysis was mainly undertaken through two avenues: one, extensive desk research, and two, discussion and interviews with selected and overlapping groups who are heavy internet users: youth, university students, members of the LGBTIQ community and sex workers. The latter is meant to relay an on-the-ground perspective of people whose lives are intertwined with the digital space.

This study was prepared as part of Association for Progressive Communications (APC) EROTICS South Asia project on sex, rights and the internet, which is supported by AmplifyChange.