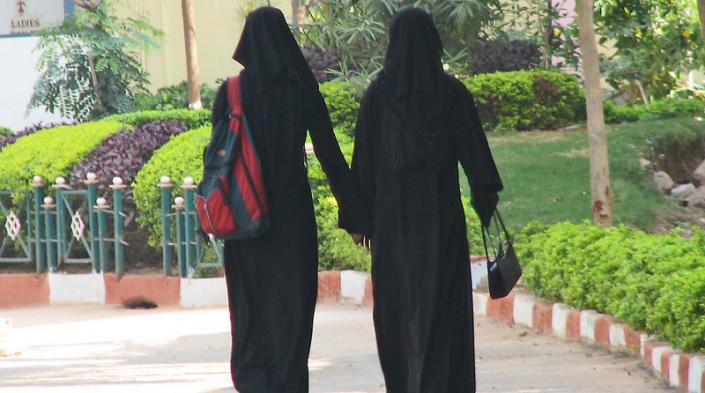 The ban on hijabs in classrooms and campuses, that has begun in coastal Karnataka and threatens to spread to other states, is a hate crime. The Hindu supremacists lynch/segregate/boycott Muslims on various pretexts – beef, Muslims’ collective prayers, azaan, the skullcap, Urdu language. Hijab is only the latest pretext to impose apartheid on and attack Muslim women, following on the heels of Hindu supremacists holding multiple “online auctions” of Muslim women and making speeches calling for their sexual and reproductive enslavement.

The video from Mandya, Karnataka of a saffron-stole wearing mob of men surrounding a hijab-wearing Muslim woman and heckling her is a warning of how the hijab can easily become the next pretext for mob attacks on Muslims.

We firmly believe that the Constitution mandates schools and colleges to nurture plurality, not uniformity. Uniforms in such institutions are meant to minimise differences between students of different and unequal economic classes. They are not intended to impose cultural uniformity on a plural country. This is why Sikhs are allowed to wear turbans not only in the classroom but even in the police and Army. This is why Hindu students wear bindi/pottu/tilak/Vibhuti with school and college uniforms without comment or controversy. And likewise, Muslim women should be able to wear hijabs with their uniforms.

Rulebooks in at least one of the Udupi colleges allowed Muslim women to wear hijabs to college in Udupi as long as they matched the colour of the uniform. It is not hijabs that provoked the ongoing educational disruptions. It is Hindu-supremacist outfits which disrupted harmony by demonstrating with saffron stoles to demand a ban on hijabs. Banning both saffron stoles and hijabs is not a fair or just solution because unlike hijabs worn by some Muslim women, the only purpose of the saffron stoles in this instance were to achieve a ban on the hijab and intimidate Muslim women.

Making hijabi women sit in separate classrooms or move from colleges of their choice to Muslim-run colleges is nothing but apartheid. Hindu supremacist groups in coastal Karnataka have, since 2008, been unleashing violence to enforce such apartheid, attacking togetherness between Hindu and Muslim classmates, friends, lovers. It must be remembered that such violence has been accompanied by equally violent attacks on Hindu women who visit pubs, wear “western” clothes, or love/marry Muslim men. Islamophobic hate crimes have been joined at the hip to patriarchal hate crimes against Muslim and Hindu women – by the same Hindu-supremacist perpetrators.

We are appalled that the Karnataka Home Minister has ordered an investigation into the phone records of hijab-wearing Muslim women, to “probe their links” with “terrorism groups”. Till yesterday Muslims were being criminalised and accused of “terrorism” and “conspiracy” for protesting a discriminatory citizenship law, or indeed for protesting against any form of discrimination. Now Muslim women wearing hijab is being treated as a conspiracy – in a country where women of many Hindu and Sikh communities cover their heads in much the same way, for much the same reasons; and even India’s first woman PM and President covered their heads with their saris without exciting comment or controversy.

Girls and women should be able to access education without being shamed or punished for their clothes. Educational institutions should pay attention to what is inside students’ heads not what’s on them. We stand with every woman who is told that she can’t enter college because she’s wearing jeans or shorts – or because she’s wearing a hijab.

We unequivocally stand in solidarity with Muslim women whether or not they wear hijabs, to be treated with respect and to enjoy the full gamut of rights. We affirm that the Karnataka Muslim women students wearing hijabs are doing so of their own agency, and this agency must be respected.

What women choose to wear whether they choose to cover or uncover, is a matter of "choice". It cannot be a measure of modesty and immodesty. This is true for patriarchal imposition of religious practices across the spectrum. Stop trying to tell women what they must wear in order to be respected – instead respect women no matter what they wear. If you think a woman “exposes herself too much” or does not “dress like a good Hindu/Muslim/Christian/Sikh woman”, the problem lies with your patriarchal gaze and sense of entitlement. Feminist and democratic principles lie in respecting that every woman charts her own path in fighting patriarchy, and deciding what practices are in keeping with her faith and which ones to reject.

We demand stern action against the organisations and individuals who led and participated in the mob that heckled a Muslim woman in Mandya. All over the country, we ask governments to alert police and public to the need to deter any attempt to intimidate hijab-wearing women.

We salute the courage of the Muslim women students in Karnataka who are bravely fighting this battle for dignity and rights in the face of intimidation by Hindu-supremacist thugs backed by the state. We are glad to hear from these students that several of their Hindu and Christian friends are supporting their struggle – and we appeal to students and citizens all over the country to resist any attempt to impose misogynist and Islamophophic "dress codes" on students and women.