An open letter to Mark Zuckerberg: The World's Freedom of Expression is in Your Hands

Home / Publications / An open letter to Mark Zuckerberg: The World's Freedom of Expression is in Your Hands 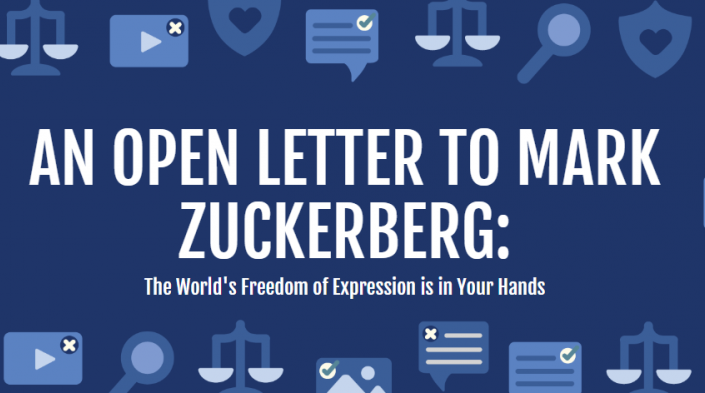 What do the Philadelphia Museum of Art, a Danish member of parliament, and a news anchor from the Philippines have in common? They have all been subject to a misapplication of Facebook’s Community Standards. But unlike the average user, each of these individuals and entities received media attention, were able to reach Facebook staff and, in some cases, receive an apology and have their content restored. For most users, content that Facebook removes is rarely restored and some users may be banned from the platform even in the event of an error.

When Facebook first came onto our screens, users who violated its rules and had their content removed or their account deactivated were sent a message telling them that the decision was final and could not be appealed. It was only in 2011, after years of advocacy from human rights organizations, that your company added a mechanism to appeal account deactivations, and only in 2018 that Facebook initiated a process for remedying wrongful takedowns of certain types of content. Those appeals are available for posts removed for nudity, sexual activity, hate speech or graphic violence.

This is a positive development, but it doesn’t go far enough.

Today, we the undersigned civil society organizations, call on Facebook to provide a mechanism for all of its users to appeal content restrictions, and, in every case, to have the appealed decision re-reviewed by a human moderator.

Facebook’s stated mission is to give people the power to build community and bring the world closer together. With more than two billion users and a wide variety of features, Facebook is the world’s premier communications platform. We know that you recognize the responsibility you have to prevent abuse and keep users safe. As you know, social media companies, including Facebook, have a responsibility to respect human rights, and international and regional human rights bodies have a number of specific recommendations for improvement, notably concerning the right to remedy.

Facebook remains far behind its competitors when it comes to affording its users due process. 1 We know from years of research and documentation that human content moderators, as well as machine learning algorithms, are prone to error, and that even low error rates can result in millions of silenced users when operating at massive scale. Yet Facebook users are only able to appeal content decisions in a limited set of circumstances, and it is impossible for users to know how pervasive erroneous content takedowns are without increased transparency on Facebook’s part. 2

While we acknowledge that Facebook can and does shape its Community Standards according to its values, the company nevertheless has a responsibility to respect its users' expression to the best of its ability. Furthermore, civil society groups around the globe have criticized the way that Facebook’s Community Standards exhibit bias and are unevenly applied across different languages and cultural contexts. Offering a remedy mechanism, as well as more transparency, will go a long way toward supporting user expression.

Earlier this year, a group of advocates and academics put forward the Santa Clara Principles on Transparency and Accountability in Content Moderation, which recommend a set of minimum standards for transparency and meaningful appeal. This set of recommendations is consistent with the work of the UN Special Rapporteur on the promotion of the right to freedom of expression and opinion David Kaye, who recently called for a “framework for the moderation of user- generated online content that puts human rights at the very center.” It is also consistent with the UN Guiding Principles on Business and Human Rights, which articulate the human rights responsibilities of companies.

Specifically, we ask Facebook to incorporate the Santa Clara Principles into their content moderation policies and practices and to provide:

Notice: Clearly explain to users why their content has been restricted.

1See EFF’s Who Has Your Back? 2018 Report https://www.eff.org/who-has-your-back-2018, and Ranking Digital Rights, Indicator G6 https://rankingdigitalrights.org/index2018/indicators/g6/.