Joint statement for the protection of digital rights defenders 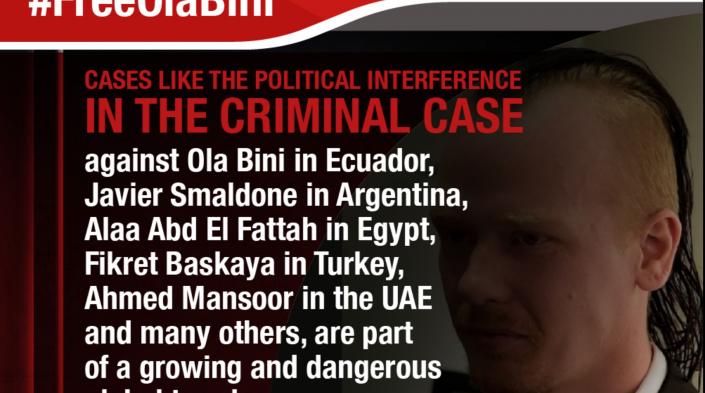 The undersigning civil society organisations express our concern over the global trend of persecuting digital rights defenders – including security researchers and trainers who act to protect and promote human rights. We demand the strong protection of their work and their recognition as human rights defenders.

Either through laws that criminalise their activity or through judicial persecution meant to silence and punish them, their work and lives are being jeopardised. This trend has a detrimental effect on human rights, both online and offline. Cases like the political interference in the criminal case against Ola Bini in Ecuador, the investigation and the arbitrary measures taken against Javier Smaldone in Argentina, as well as the cases of Alaa Abd El Fattah in Egypt, Fikret Baskaya in Turkey, Ahmed Mansoor in the UAE and many others, are part of a growing and dangerous global trend.

The work digital rights defenders do in defence of privacy is fundamental for the protection of human rights. When they raise awareness about the existence of vulnerabilities in systems, they allow the public and private sector to find solutions that improve infrastructure and software security for the benefit of the public. Furthermore, their work as security advisers for journalists and human rights activists is of vital importance for the safety of journalists, activists and other human rights defenders.

The work of digital rights defenders is a legitimate exercise of the right to freedom of expression and, as such, it must be protected. The Special Rapporteurs on the right to freedom of opinion and expression from the Organization of American States and the United Nations have expressed concern for the detention and prosecution of digital rights defenders like Ola Bini. Coding is just another form of expressing ideas in what is usually known as high-level languages. More importantly, their research is a manifestation of seeking, receiving and sharing information.[1] This right is essential when the information sought is critical for public governance, protecting privacy and infrastructure safety.

We reject all persecution of digital rights defenders. We demand the recognition of their work at the legal, social and political levels. Digital rights defenders should also be recognised as human rights defenders when they work for the defence of fundamental human rights or in any way for public interest. Hence, their work and their basic rights must be protected to ensure the safe, transparent, democratic and secure development of the internet and digital technologies across the world. They should be allowed to do their work without fear of judicial harassment or any form of harm coming from the state.

Committee for the Protection of Journalists (CPJ)

Vigilance for Democracy and the Civic State