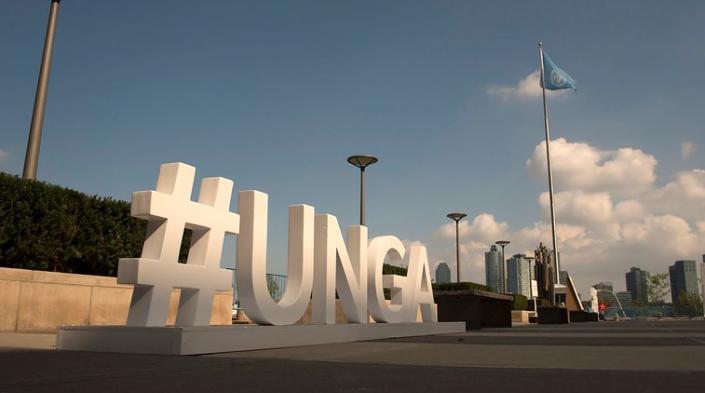 The undersigned civil society organisations mark the conclusion of the United Nations General Assembly's (UNGA’s) 74th Third Committee session, with the following observations on both thematic and country-specific resolutions.

We welcome the first joint statement on reprisals at the Third Committee led by the United Kingdom and joined by a cross-regional group of 71 countries, calling on all States and the UN to prevent, respond to, and ensure accountability for cases of intimidation and reprisals against those who engage or seek to engage with the UN. This move is in line with the call made this September at the Human Rights Council (resolution 42/28) for the General Assembly to remain seized of all work in this area. This joint statement is an important first step towards enhanced dialogue on reprisals at the General Assembly.

The human rights resolution on the implementation of the UN Declaration on Human Rights Defenders and elements of effective protection policies and mechanisms is significant,  including as it does new references to the need to remove barriers to the right to defend rights. We’re disappointed at the weakening of language exhorting States to immediate action, given that the grave situation faced by defenders in too many parts of the world demands an urgent response. However, the consensus outcome and record number of co-sponsors across regions, provides an opportunity and  basis for an ongoing, energetic and focused conversation on where global agreements on the right to defend rights should go next.

It is important that the Third Committee has again committed to ensure the safety of journalists and end impunity for attacks. While we welcome the reaffirmation of measures States must take on prevention, protection and remedy of attacks, their implementation is sorely lacking. We are also disappointed that more progressive language already adopted by consensus at the Human Rights Council was not fully incorporated into this text, and that the recommendations from the UN probe into the murder of Washington Post journalist Jamal Khashoggi are also not reflected. The UN must do much more if it will turn the tide on attacks against journalists, and the creation of a UN Standing Investigative Mechanism, as recommended by the Special Rapporteur on extrajudicial executions, could be a significant contribution in this regard.

Ongoing consensus support for the highest standard national human rights institutions is appreciated. However, we’re disappointed that a commitment to formalising the relationship between the Global Alliance for National Human Rights Institutions and the UN - a measure to further enable the UN to benefit from the work of NHRIs - was not supported.

Advances were made with the Denmark-led Torture and other cruel, inhuman or degrading treatment or punishment at a time torture remains prevalent in several UN States. We welcome consensus backing of new language agreed on the elaboration of a set of universal standards for non-coercive interviewing methods and procedural safeguards, the need for states to adopt a gender-responsive approach in the fight against torture, as well as the recognition that the prevalence of corruption can have a negative impact on the fight against torture.

We welcome the adoption by consensus of the Annual Resolution on the Rights of the Child, in time for the Commemoration of the 30th anniversary of the Convention on the Rights of the Child. It was encouraging to see States maintain their commitments, despite attempts to water down text relating to sexual and reproductive health and comprehensive education, and thus challenge children’s basic right to education and health. It is of concern that the Third Committee did not open the Resolution on the Girl Child for negotiations. This was a missed opportunity for States to take stock of progress made and to reaffirm their commitments to the rights of girls, particularly within the context of increasing hostility and attempts to erode women’s and girls’ rights to bodily autonomy.

We welcome the adoption of the resolution on the Human Rights to Safe Drinking Water and Sanitation, which has now been brought back to consensus. In particular we welcome the new emphasis on addressing menstrual hygiene management needs, including the widespread silence and stigma surrounding menstruation, and greater attention to the growing threat that the climate crisis poses to the realisation of water and sanitation services for all.

We appreciate that the Third Committee has once again adopted without a vote a resolution condemning the long-standing and ongoing systematic, widespread and gross violations of human rights committed by the Democratic People’s Republic of Korea, which the 2014 report of a Commission of Inquiry created by the Human Rights Council characterized as likely amounting to crimes against humanity. We note that this year’s resolution encourages the UN Security Council to engage more actively on the human rights situation in the DPRK and, given the gravity of the violations, we hope the Council will convene a meeting on this subject before the end of 2019, as it did on an annual basis from 2014-2017.

We welcome the overwhelming support during the vote on the resolution on the human rights situation in the Islamic Republic of Iran, recognising the ongoing systemic and systematic rights violations taking place in the country. We are deeply concerned about the reported killing of more than 100 people protesting economic policies since 15 November. In addition, the Iranian government has shutdown the internet, undertook mass arrests and reportedly declared a gag order on print media, all less than 24 hours after this resolution was adopted, and just weeks after Iran claimed progress on human rights during its Universal Periodic Review. These serious human rights violations were committed notwithstanding the scrutiny of Third Committee and the resolution’s attempts to encourage progress, underscore the importance of Member States who abstained or voted “no” to support the resolution when it is considered in the upcoming Plenary session.

The resolution on human rights abuses against Rohingya Muslims and other minorities in Myanmar, led by the Organization of Islamic Cooperation (OIC) and the European Union, calls on Myanmar to end ongoing human rights abuses and highlights violations perpetrated by armed forces. Importantly the resolution calls on the government to cooperate with and grant ‘unmonitored’ access to UN mandate holders and mechanisms. It also welcomes the Secretary-General’s commitment to implement the recommendations in the independent Rosenthal Report, which is particularly important as we are yet to see how the Secretary-General will address the report’s finding of ‘systemic failure’ by the UN in Myanmar since 2010. We welcome the reference to Security Council resolution 24/67 on sexual violence in conflict, and therefore the General Assembly’s recognition that a survivor centered approach should be adopted.

The centerpiece of the session on the Committee on the Elimination of Racial Discrimination was a powerful joint statement on the massive human rights abuses in Xinjiang delivered by the UK on behalf of 23 countries. Although China managed to round up several dozen member states to sing its praises in response, the UK-led joint statement highlights the growing concern about the detention of over a million Turkic Muslims in Xinjiang and the need for China to grant full and unfettered access to the High Commissioner for Human Rights.

We welcome the consensus adoption by the Third Committee of its annual resolutions on Freedom of Religion or Belief led by the European Union and on Combating Religious Intolerance led by the OIC. Noting the alarming rise of reports of violent acts and threats against persons on the basis of their religion or belief worldwide, we welcome ongoing efforts by States to encourage the practical implementation of both resolutions.The reinvigoration of the Istanbul Process, with the seventh meeting taking place in the Netherlands shortly after the adoption of these resolutions, is positive, and we encourage all States to engage further.

We regret that following repeated attempts in Geneva to dilute, distort and distract the mandate of the UN Special Rapporteur on the protection of human rights while countering terrorism, States continue to support the leadership of Egypt in the resolution on human rights and terrorism. This Third Committee session, the last before the review of the Global Counter Terrorism Strategy review next year, was a crucial opportunity for States to restore the approach and strong human rights commitments from prior Mexican-led resolutions on this issue (resolution 72/180). Considering also the national record of Egypt on using counter terrorism measures to violate human rights, including to engage in reprisals against persons seeking to cooperate with the UN, as condemned by the High Commissioner on 20 November, there must be a change in approach. We therefore consider the decision of the President of the General Assembly to award Egypt with the role of co-facilitating the outcomes of the Global Counter Terrorism Strategy review inappropriate, and call for this decision to be reconsidered.

We regret that despite significant opposition, the resolution on Countering the use of information and communications technologies for criminal purposes led by Russia was adopted and will establish a process to elaborate a new international convention on cybercrime. Nearly 50 organizations and individuals from civil society expressed concern that this initiative could undermine the use of the internet to exercise human rights and facilitate social and economic development. As the resolution on human rights defenders importantly noted, cybercrime legislation is being misused in many parts of the world to target defenders, hinder their work, and endanger their safety in a manner contrary to international law. Building on and improving existing instruments is more desirable and practical than diverting scarce resources into a new international framework likely to be lengthy and unlikely to result in consensus. In particular, a process led by Russia deserves high levels of scrutiny, given its efforts to expand government control over the internet, with the “sovereign internet” law going into effect earlier this month.

The resolution on implementation of the Convention on the Rights of Persons with Disabilities was focused on Accessibility this year. Mentions of the UN Disability Inclusion Strategy, the Accessibility Steering Committee, and relevant International Days were welcomed. We regret that references to the highly relevant Security Council Resolution 2475 were lost, but welcomed mentions of humanitarian situations.

Finally, it is a source of ongoing frustration that civil society are not consistently welcomed to attend informals as observers. Our direct experience of the human rights violations and abuses Third Committee seeks to address, and our expertise on the substance and history of UN resolutions, should mean civil society are treated as valuable partners. States should invite civil society to actively participate in informals as a matter of course, and speak up if their presence is challenged.

Jacob Blaustein Institute for the Advancement of Human Rights