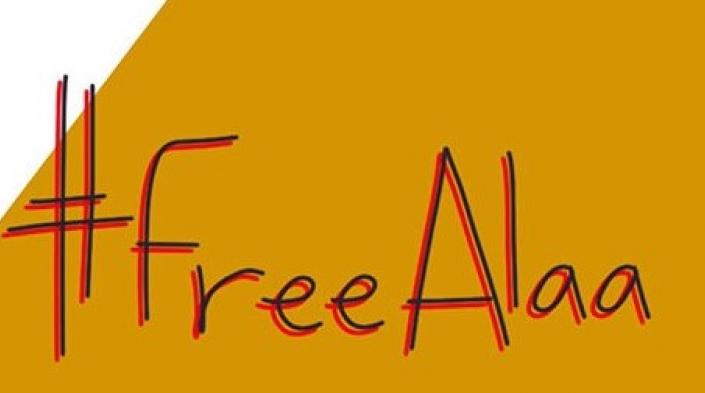 This statement is also available in Arabic.

Alaa has been on a hunger strike for over two weeks in protest to his continued illegal detention, prohibition of communication with his family, and the inhumane conditions in Tora prison, which has been described by his family as the “the worst of all of his previous detentions dating back to 2006.”

He  was arrested on September 27th, 2019, beaten, threatened, and robbed in prison, only six months after serving a five-year prison sentence for organizing a protest in 2013. Alaa was snatched from outside the police station where he had been forced to sleep every night. and transferred to National Security Prosecution’s where he was subjected to violence and threatens His arrest took place in the context of a full-scale crackdown on those involved in the September 20th anti-Sisi protest, where more than 4,000 people have since been detained, including prominent activists, journalists, university professors, and lawyers.

While he has not been convicted, he has been kept in detention without a trial and charged with “belonging to an illegal organization” and “spreading false news,” a blanket, vague, and broad charge that the Egyptian authorities can routinely leverage to persecute activists, journalists, and ordinary citizens in Egypt.

And yet, Alaa is standing against injustice and is fighting for his basic rights, together with those of more than 60,000 political prisoners held in Egyptian prisons in terrible and decaying conditions without any basic rights, sufficient food, or access to health care. This is taking place during this crisis when overcrowded prison cells have become infestation hubs for the COVID-19.

Instead of taking immediate measures to protect the prison population and release pretrial detainees and political prisoners in response to the global COVID-19 health pandemic, Egyptian authorities moved to further isolate and block prisoners from the outside world. They canceled family and lawyer visitations and communication and suspended legal proceedings.

Alaa’s family has been unable to visit or communicate with him despite consistent requests and endless hours of waiting outside of the Tora maximum-security prison 2 where Alaa has been confined to his cell in remand detention with no access to fresh air, exercise, books, or newspapers. With the outbreak of the pandemic, the Egyptian prison authorities are still refusing to pass on letters, clothes, and other necessary medical and hygienic materials from his family.

On April 28 2020, his family was finally permitted to view the official report documenting Alaa’s hunger strike to the prosecutor including information on his health condition. Alaa officially started a full hunger strike on April 12th 2020, protesting the illegal continuation of his detention. In a statement posted by his sister, Mona Seif, Alaa had stated in the report that “the current situation requires my presence with my family, my elderly mother and my son, during these difficult circumstances of the Corona pandemic, rather than of being held ‘safe’ in prison based on inadequate and fabricated investigations, in a case that everyone knows will not be referred to courts at all. ”

“I demand regular communication with my family so I can check on them, and with my lawyers to consult with them. I also demand access to official information regarding Corona virus from national newspapers and radio.”

In the words of the writer Ahdaf Soueif, his aunt, Alaa has always fought injustice with his words and body, and “by going on hunger strike now he draws attention to the plight of tens of thousands in Egypt’s prisons.”

Alaa decided, as always, not to be silent. We, now, must do our part.