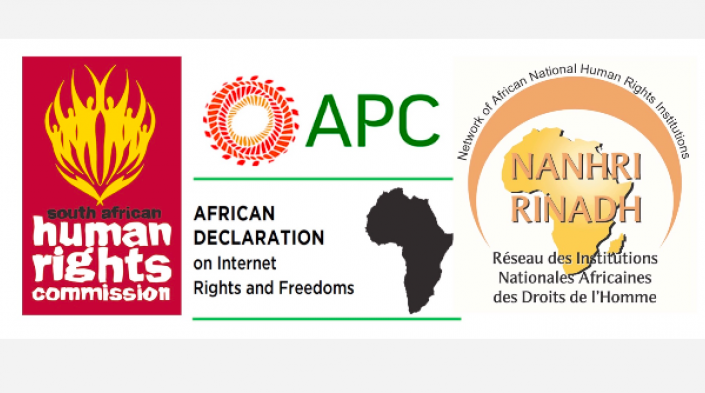 We, the participants at the Roundtable on “The Role of National Human Rights Institutions in Protecting and Promoting Human Rights Online” held in Braamfontein, Johannesburg, South Africa, from 26 to 28 May 2017, drawn from representatives of some national human rights institutions and civil society organisations across Africa:

Noting that the internet is a resource through which human rights can be exercised, enjoyed and advanced as well as violated;

Acknowledging that lack of access to the internet deprives significant portions of society of the opportunity to exercise or enjoy many constitutionally, regionally and internationally guaranteed human rights and denies citizens access to public services, which are increasingly being delivered online or through digital platforms;

Cognisant of the fact that NHRIs are faced with many challenges, which increasingly include having to develop awareness and capacity to effectively promote and protect human rights in the online environment, given that human rights on the internet are impacted, for example, by the content removal practices of intermediaries, such as telecommunications companies and internet service providers, without following due process, and from threats to cybersecurity which have resulted in regulatory responses that do not always pay due regard to safeguarding human rights;

Noting that most NHRIs lack comprehensive internal data protection policies and that where such policies exist, the institutions are under resourced to implement them;

Convinced that states have a duty to provide affordable internet access to all citizens and populations to enable them to exercise or enjoy their human rights on or through the internet and to access those public services and other resources necessary for their development, which are increasingly only available online;

Observing that many states have adopted laws and legal instruments to deal with cybercrime and security, including deployment of monitoring, interception and mass surveillance tools and through administrative actions such as SIM card registration, and that such actions frequently violate human rights in the online environment, and more particularly the right to privacy;

Further observing the increasing tendency by many states to criminalise legitimate expression through the adoption of otherwise necessary legal instruments such as cybercrime, cybersecurity and anti-terrorism laws and other similar legislation;

Concerned that this trend calls into question the legitimacy of such legislation and undermines public faith in and support for these laws as well as their enforcement;

Observing that members, staff, witnesses, sources and other collaborators of NHRIs can and have sometimes been targets of government and third-party actions such as cyberattacks and surveillance leading to breaches of confidentiality and the right to privacy;

Noting that NHRIs are expected to deliver their mandates and exercise their powers in a complex and ever-changing digital landscape that continues to see many new challenges emerge;

Acknowledging the proliferation of unlawful or illegal content and activities online that violate the human rights of others and which need to be addressed in a manner that does not violate the rule of law and international human rights norms;

Recognising that the African Commission on Human and Peoples' Rights Resolution on the Right to Freedom of Information and Expression on the Internet in Africa [1] affirms the African Declaration on Internet Rights and Freedoms as a model framework for the regulation of the internet and digital platforms that states can refer to for guidance and align within their legislative and policy-making activities regarding the internet;

Noting the prominent and positive role played by the Network of African National Human Rights Institutions (NANHRI) in helping African NHRIs fulfil their mandate, and recognising the key role that NANHRI could play in aiding NHRIs to protect and promote human rights in the digital age;

As the the body that represents and promotes the interests of African NHRIs, we request that NANHRI present this communiqué to its members and encourage them to consider endorsing the African Declaration on Internet Rights and Freedoms and to apply its 13 principles in their various activities, and to collaborate with other stakeholders in achieving the objectives of creating a positive, rights-based and democratically governed internet policy environment in Africa.

In the discharge of their protective mandates, NHRIs, in collaboration with other stakeholders, such as state mechanisms, civil society, the technical community and the private sector, should:

In the fulfilment of their promotional mandates, NHRIs should seek to proactively create a national, regional and international culture of respect for human rights in the digital age through:

We urge states across Africa to protect and promote human rights on the internet, and to this end to provide adequate resources for the work and infrastructure of NHRIs, which have a major responsibility for the promotion and protection of human rights at the national level.

States should adopt multistakeholder approaches in designing, developing and implementing appropriate responses to speech that incites hatred, discrimination, violence and unlawful activities on the internet, which do not put in jeopardy human rights, particularly the right to freedom of expression.

NHRIs should be routinely consulted and actively involved in the consideration of bills, draft policies, regulations and other instruments aimed at regulating the internet, digital platforms and other communication technologies prior to their adoption, whether administratively or through legislative processes, to ensure that they conform with international human rights norms and standards.

NHRIs, both individually and in concert with other bodies in other countries in Africa, should institute and implement capacity-building programmes for their officials and personnel to enhance their understanding of relevant legal, constitutional, regional and international norms and standards in the protection of human rights on the internet.

HRIs should progressively take advantage of the internet as well as other digital tools and platforms in all aspects of their operations, including for enhancing internal communication such as coordinating personnel and officials in decentralised offices. The internet and other digital tools and platforms can also be used to extend reach and coverage by deploying them in receiving complaints, processing and adjudicating such complaints, and reporting, as well as in their public awareness activities, which can also help to increase more effective data collection and analysis, timely disposal of cases and general efficiency.

African States, civil society organisations, the African Union and other regional bodies and institutions, academic institutions, the private sector and citizens should consider the African Declaration on Internet Rights and Freedoms which was developed based on established international and regional human rights standards as a useful guide to promoting and respecting human rights in the digital age.

Participants expressed gratitude to the organisers of the Roundtable, the Association for Progressive Communications (APC) and its partners, the Secretariat of the African Declaration on Internet Rights and Freedoms Coalition, the South African Human Rights Commission (SAHRC), the Network of African National Human Rights Institutions (NANHRI), the Centre for Human Rights of the University of Pretoria, the Legal Resources Centre (LRC), Media Rights Agenda (MRA), Media Monitoring Africa (MMA), and ARTICLE 19 Eastern Africa.

We thank in particular the South African Human Rights Commission (SAHRC) for generously hosting the event at their premises in Johannesburg.