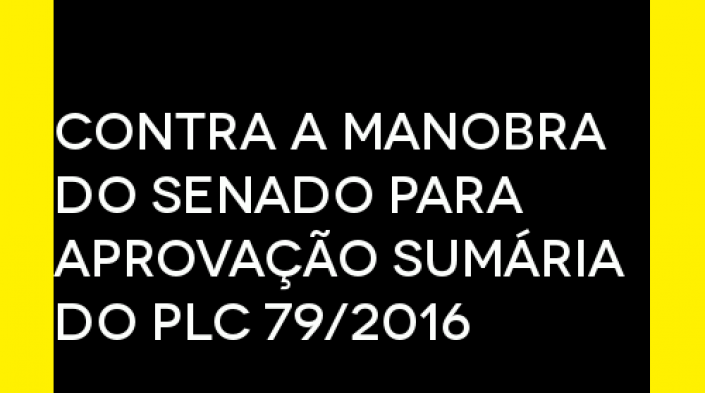 At APC, we are concerned at the increasing undermining of democracy and due process in Brazil, in particular through the implication of media conglomerates in the unfolding events. APC believes that the media should serve the public interest, both online and offline, and that the internet is a critical platform for alternative media voices, and in this regard we encourage policy and regulation that support an open internet and media diversity. After the recent events affecting the Brazilian Internet Steering Committee (CGI.br) and the rights of internet users in Brazil, we express solidarity with the Brazilian people in general and in particular with our friends and colleagues, including APC organisational member Nupef, the CGI.br, and the many Brazilian civil society organisations we work with.

Today we want to share this statement on the attacks of the Temer government against the CGI:br:

The Coalition on Network Rights is publicly repudiating and denouncing the most recent measure of the Temer management against the rights of Internet users in Brazil. Unilaterally, the Federal Government published on Tuesday, August 8th, in the Official Gazette (DOU), a public consultation aimed at changes in the composition, election process and attributions of the Internet Steering Committee (CGI.br).

Composed by representatives of the government, the private sector, civil society and technical and academic specialists, CGI.br is, since its creation, in 1995, responsible for establishing standards and procedures for the use and development of the Internet in Brazil. An international reference for multistakeholder Internet governance, the Committee had its role strengthened following the promulgation of the Internet Civil Rights Framework (Law 12.965/2014, known as the "Marco Civil") and its regulatory decree, which establishes that it is the responsibility of the committee to define the guidelines for all issues related to the sector. From then on, the CGI.br became the subject of the private sector's dispute and greater interest.

By publishing a public consultation to significantly change the Steering Committee model unilaterally and without any prior dialogue within the CGI.br itself, the government overrides the law and breaks with the pluralism that marks the debates on the Internet and its governance in Brazil.

The consultation was not the subject of the last CGI.br meeting, held in May, and on Monday, August 7th, the day before publication in the DOU, the committee's coordinator appointed by the government, Maximiliano Martinhão, only sent an e-mail to the list of board members reporting that the Federal Government intended to discuss the issue - without, however, informing that everything was already set, in the process of being officially published. It is worth mentioning that, on August 18th, the first meeting of the new CGI.br management takes place, and the government could have waited to set the issue in a democratic way with the committee members. However, it preferred to act in an autocratic way.

Since his inauguration as coordinator last year, Martinhão - who is also the Information Technology Policy Secretary at the Ministry of Science, Technology, Innovation and Communications - has made public statements in support of changes to the Internet Steering Committee. As early as June 2016, in the first meeting he chaired at CGI.br, after the change in command of the federal government, he declared that he was "receiving demands from small providers, content providers and investors" to change the composition of the body.

The pressure to revise the strength of civil society in the committee grew, especially on the part of telecommunications operators, supporters of the government. In December, during the Internet Governance Forum in Mexico, organized by the United Nations, a group of civil society entities from more than 20 countries expressed concern and denounced attempts to weaken CGI.br by the Temer administration. In the first half of 2017, the government maneuvered to impose a standstill on behalf of a questionable "economy of resources".

Martinhão and other members of the Kassab/Temer administration have also publicly defended the achievements of the Civil Internet Framework, proposing the easing of network neutrality and criticizing the need for users to consent to the processing of their personal data. In this context, the multi-sectoral composition of CGI.br has been fundamental for the defense of the postulates of the MCI and basic principles for the guarantee of a free, open and plural internet.

For this reason, this Coalition - which brings together researchers, academics, developers, activists and consumer protection and freedom of speech entities - launched, during the last CGI electoral process, a public platform that called for the "strengthening of the Internet Steering Committee in Brazil, preserving its attributions and its multistakeholder character, as a guarantee of the multi-participatory and democratic governance of the Internet" in the country. After all, changing the CGI is strategic for the sectors that want to change the direction of Internet policies that have been implemented in the country.

In this sense, considering the "Marco Civil", the multistakeholder character of the CGI and also the political moment that the country is going through - from an interim government of questionable legitimacy to undertake such changes - the Coalition on Network Rights demands the immediate cancellation this consultation.

It is unacceptable that a process directly related to Internet  governance is affected by a dubious public consultation without its guidelines having been discussed before, internally, by CGI.br. It is another example of the modus operandi of the administration that occupies the federal government and that has little appreciation for democratic processes. We will continue to denounce such attacks and seek support from different sectors, both inside and outside Brazil, against the dismantling of the Internet Steering Committee.

To read the original statement in Portuguese, click here.