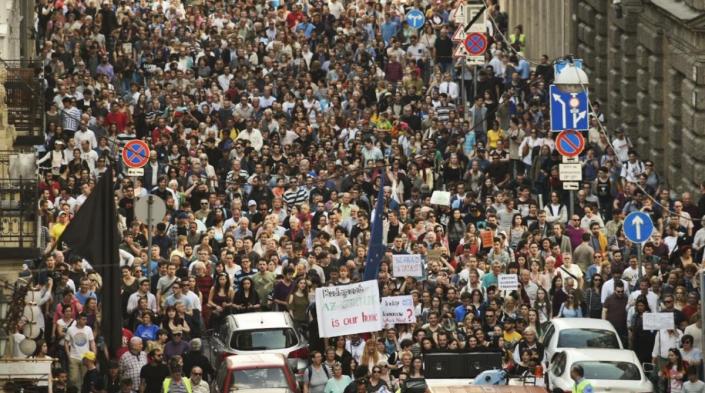 The Association for Progressive Communications (APC) expresses its solidarity with civil society in Hungary, who are facing unjustifiable attacks from the government aimed at stigmatising them and undermining their credibility.

We stand with the 80,000 people who marched in Budapest in protest of government policies that seek to intimidate civil society and curtail academic freedom, in particular, targeting Central European University (CEU).

We echo Hungarian NGOs and the joint letter from civil society organisations across Europe in opposing the bill on the “transparency of organisations receiving foreign funds”. As the Council of Europe’s Expert Council on NGO Law concluded earlier this week, the draft law is “largely incompatible with international and European standards and would open the door to further acts of discrimination and/or vilification of civil society.” The Expert Council added that “in terms of democracy, human rights and the rule of law – the core values of the Council of Europe – this Hungarian draft Act is flawed from start to finish.”

“APC extends our support and deep respect to civil society and individual activists in Hungary,” said Pavel Antonov, a CEU alumnus and executive editor at APC member organisation BlueLink.net, based in Budapest. “Organisations and individuals in Hungary and elsewhere in the region who were part of the green movement and who stood for gender equality, human rights, media freedom and democracy in the 1990s and early 2000s played a significant role in APC’s history.“

“We also want to recognise the positive role that the Open Society network has played in supporting the use of the internet as a means for building more open and inclusive societies – one of APC’s core goals,” Antonov added.

The smear campaign against civil society by the Hungarian government is neither an isolated incident nor a purely domestic matter. It is part of a broader trend visible in many parts of the world of governments undermining the work of NGOs through restrictions on foreign funding and establishing administrative hurdles to make it impossible for NGOs to operate and carry out their work. The undermining and bullying of critical civil society, particularly human rights and environmental organisations, is spreading from Russia, through Turkey, Macedonia, and Bulgaria. Even in the United Kingdom the restrictive Lobbying Act was used recently for the first time to fine Greenpeace for an act of civil disobedience.

Civil society’s role in holding governments and businesses accountable is an essential element of a healthy democratic society, and such attacks must be called out and stopped wherever they occur. We therefore call on the government of Hungary to repeal this draft law on NGOs.

We welcome the European Commission’s announcement on 27 April that it is launching an enforcement action against Budapest over the amendments to Hungary’s Higher Education Law, which specifically target CEU, for violating EU standards.

We urge the European Parliament to also adopt a resolution urging the Hungarian government to withdraw the bill on NGOs, and to implement legal mechanisms that would hold other governments across the continent for accountable similar undemocratic actions, now and in the future.