The digital divide in India: How access to technology and reliable information affects India’s response to the pandemic

Home / News / The digital divide in India: How access to technology and reliable information affects India’s response to the pandemic 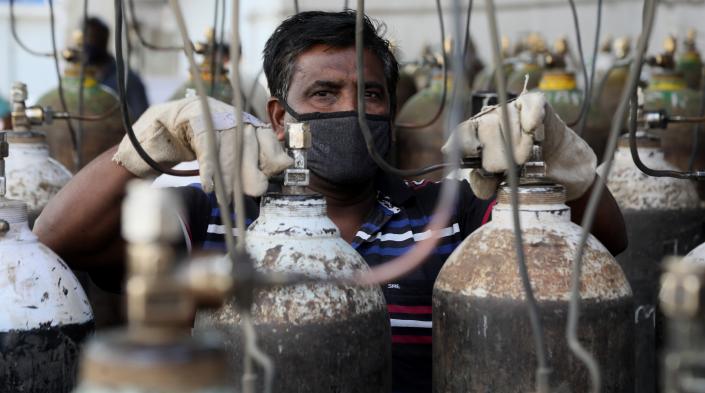 With more than 349,000 deaths and more than 2.5 million active cases, people in India are struggling in the midst of an unrelenting surge of COVID-19 infections. The second wave of infections has strained the country’s already fatigued healthcare system and people are dying at the doors of hospitals, desperately needing immediate medical attention. Medical supplies, particularly oxygen, are running low. Fires continue to burn incessantly in crematoriums as they respond to seemingly endless queues of bodies.

Against this backdrop of death and chaos, the people are clamouring for urgent and strategic government interventions. The country’s head of state, Narendra Modi, is notably absent and silent, while even his supporters demand that he take charge and address the dire situation.

Technology and digital solutions have aided in addressing a range of emergency situations and crises all over the world. However, in India, the digital divide has become another hurdle for people to negotiate in order to survive the pandemic. People are struggling to bridge the technology divide to access vaccines, as well as to access reliable information in the midst of fake news and misinformation. The government is also using the pandemic as a smokescreen to clamp down on dissenters and critics who express their thoughts online.

How can we leverage technology to ensure equitable access for all and to uphold the people’s rights to freedom of speech and expression? How is fake news exacerbating the situation on the ground?

There are two vaccine manufacturers in India, the Serum Institute of India (SII) and Bharat Biotech. SII makes the local version of the AstraZeneca vaccine while Bharat Biotech manufactures Covaxin. Together, these two firms can make at most 90 million doses of vaccine per month. Although India has administered more doses than most countries in the world (only the United States has administered more), with a population of nearly 1.4 billion people, this is not enough.

At the time of writing, only 13.44% of India’s population has received a dose of the vaccine, while vaccine rollout has been suspended in key cities due to lack of supply. On the ground, people are being turned away from vaccination hubs either because there are no more vaccines available or they failed to make an appointment online.

An app called CoWIN has been developed for India’s vaccine rollout. Individuals who are 18 to 45 years old need to register to be able to secure a vaccination appointment. But this process has been far from helpful: on top of crashes and bugs, the online registration system created a divide between those who can access the internet readily and those who cannot access it at all. In the 2018 report, Household Social Consumption on Education in India, it was noted that only 20% of the population can access the internet. Inequality in accessing and using the internet also exists in terms of age, location, gender, caste and language, among other factors. There are 18 million households in India that have entered the pandemic with no working mobile phones and no way to access the internet.

As vaccination appointments were snapped up in the cities, those who could use the app secured appointments in rural areas. But many have been left out. In Kamsanpalle village in Shadnagar, villagers travelled as far as 23 kilometers just to access an internet kiosk and have their names registered. Most rural residents who have not heard of the app and the online registration process flock into vaccination sites only to be turned away and told to register online, even if they do not know how.

Language is also a barrier in using the app. Until recently, it was only available in English. The app can now be used in 10 regional languages including Punjabi, Marathi, Telugu and Gujarat.

A double pandemic: The virus and fake news

Confusion and unreliable information have been prevalent since the pandemic hit India. Even before the first cases of COVID-19 were recorded in the country, India’s top social media platforms were rife with both misinformation and disinformation about the origin of the virus, how it spreads, and ways to cure the disease. Manipulated and doctored videos, images and stories are widely shared on TikTok, WhatsApp, Facebook and other platforms. This massive surge of fake news is undermining people’s access to legitimate and fact-checked sources of information. As more people start using social media more frequently to try to understand what is going on, they have become more exposed to fake news being shared online.

The spread of fake news – what has been called an “infodemic” – has lethal consequences in India. In 2020, the Islamic group Tablighi Jamaat held a congregation in New Delhi. Shortly after this event, there was a spike in COVID-19 cases across the country. Fake videos and images began spreading widely on social media platforms, blaming the spike on the Muslim population and painting them as “Corona Villains”. This misinformation has led to physical assaults against Muslims and a boycott of their businesses.

Apart from wrongly placing the blame on a specific community, fake news has also hampered understanding of the science behind how the virus spreads and how it is treated. It has also affected the country’s vaccination drives, as misleading content about the vaccines’ adverse effects has caused people to doubt whether the vaccines can actually protect them.

Misleading information on how to treat the virus is prevalent in both traditional and online media, with government officials and even health practitioners publicly promoting alternative ways to manage the disease, including the consumption of cow’s urine and unproven medicines such as AYUSH 64, an Ayurvedic pill made from four herbs that is claimed to have anti-inflammatory and “immunomodulatory” properties.

The government has added to this confusion by releasing contradictory messages that the country has contained the virus, and by starting to allow mass gatherings, including campaign soirées.

It has also used the pandemic as a smokescreen to clamp down on dissenters and critics who voice their opinion online. Amidst this uncontrollable second wave, India’s government found the time to order Twitter, Facebook and Instagram to take down posts that criticised the government’s missteps in handling the pandemic.

Those who criticise the government’s response to the pandemic face threats of legal action. Multiple people were arrested for allegedly hanging posters that said, “Modi, why did you export vaccines meant for our children?”. Those who ask for help on social media may also face charges for spreading misleading information. A man who used Twitter to try to source an oxygen tank was recently charged because authorities ruled that his post was made to cause “fear or alarm”.

But the situation is not all dire in India. Community-led actions have sprung up – and in some cases become civil society movements – aimed at helping those in need. Social media has become a connector between those who are in need of aid and those who are in the position to help. In the absence of up-to-date and accurate data from the government, people have also relied on social media to get updates about hospital capacity and the availability of oxygen tanks, and to find medicines, among other life-saving information.

Digital Empowerment Foundation (DEF) has launched the COVID-19 Digital Empowerment Relief Programme 2.0, an initiative that provides medical and essential supplies such as pulse oxymeters, masks, soaps and sanitisers to 1,000 frontline health workers and one million households all over India.

Apart from coordinating these relief supplies, DEF’s volunteers are also working towards providing vetted and accurate information about COVID-19, vaccines, and where and how to get help, among other topics. In coordination with state governments, DEF’s COVID Information Van is delivering aid to communities and helping them access reliable information.

A website called MutualAidIndia.com has pooled calls for aid and support from all over the internet to help potential donors find information on donation drives. The website started as a Google Document used to compile calls for help from various social media sources. It has now grown to an online database where individuals can see calls for donations arranged by categories. For example, there are categories for donation drives in rural areas and for supporting women, queer people and individuals who are experiencing financial difficulties after a death in the family. MutualAidIndia.com is maintained by over 30 volunteers operating according to a set protocol and statement of ethics.

The strong civil society response to the pandemic has been bolstered by aid coming from other countries, near and far. Even Pakistan, a country with a chequered history with India, has offered to send help.

Technology is not a catch-all solution

While technology can help nations address the pandemic, governments should also be wary of treating it as a catch-all solution. Technology can only be harnessed efficiently if the underlying problems of meaningful access and rights-based policies are addressed. As India has shown, many people are excluded from a national vaccine drive if they do not have access to the internet. Fake news cannot be “legislated away”, because of the negative effect on freedom of expression, and a government’s concern with controlling its image during the pandemic, can deny a platform to those in need for asking for help. As DEF’s COVID Information Van suggests, besides longer-term media and information literacy programmes, ensuring people have access to reliable information requires active interventions of a different kind in times of crises.

Communities also need to be active in their response to the pandemic, filling the gaps left by inadequate government strategies. The internet enables the work of volunteers, and offers a ready way for the public and donors to respond meaningfully to those in need. While projects such as MutualAidIndia.com demonstrate that the internet can be a collective resource for addressing the needs of vulnerable groups, this takes initiative from civil society and individuals.

In these trying times, cooperation among countries is a lifeline. International solidarity is supported by digital solutions that bring countries together, especially those who are experiencing the same challenges. Through technology, nations can communicate better and faster and take advantage of more efficient service delivery systems – in practical terms, aid can reach countries quicker. The pandemic may have closed physical borders, but it has also inspired a stronger and more connected international response. India is struggling, but it is not alone.

Have a look at DEF’s social media platforms and support their campaign outreach by sharing/resharing: