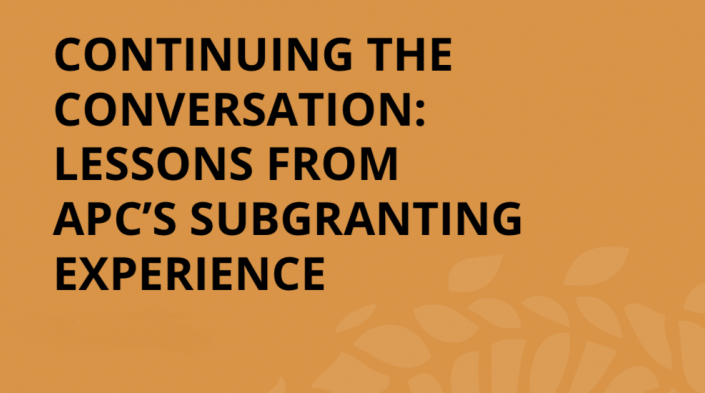 Subgranting – when a donor allocates a substantial amount of money to a credible organisation for further disbursement to other organisations – is becoming more common as a strategy by large donors to make sure that funding is reaching the right people. It reduces the administrative burden for donors on working individually with organisations on relatively small projects, and the uncertainty they might feel about worthy or convincing projects or organisations to support. Organisations like APC serve as intermediaries to these funds – they are strategically situated to provide the kinds of guarantees needed by donors that their money will be disbursed well.

Subgranting is not without its detractors; for some it limits the ability of organisations to approach mainstream funders for the first time, and curtails their access to funding. This places an additional responsibility on organisations like APC to make sure they are doing their job of subgranting well and being transparent and fair in how they share the funds.

Since 2016, APC has run a subgranting programme funded by the Swedish International Development Cooperation Agency (Sida), disbursing over USD 1.2 million to 35 organisations over the period. The programme has an annual competitive open call for project grants, and a rolling small grant fund that is available to members throughout the year. It has funded diverse projects, mostly in the global South, in countries such as Nigeria, the Democratic Republic of Congo and Cameroon in Africa, Argentina and Colombia in Latin America, and Bangladesh, India and the Philippines in Asia. A discretionary fund in the organisation made up from members fees, called the Solidarity Fund, has meant organisations in the United States, and other so-called “developed countries” such as Spain and South Korea, have also received support as part of the programme.

APC is not entirely new to subgranting, at least as far as disbursing funds amongst member organisations with a collective goal in mind goes. Its earliest experience of this, Banks says, were the ICT Policy Monitors, cross-border projects that were part of APC’s earliest internet rights work in Latin America, Europe, Asia and Africa, funded by the International Development Research Centre (IDRC), Open Society Initiative (OSI) and Evangelischer Entwicklungsdienst (EED) in the early 2000s.

Subgranting has also been an advocacy strategy for several projects at APC, including GenARDIS, EROTICS and the Take Back the Tech! Fund, run by the organisation’s Women’s Rights Programme (WRP). More recently, subgranting is being used in its Sida-funded “Connecting the Unconnected” project on local access and community networks in the global South, has been tested in WRP’s Feminist Tech Exchange, and now forms an important part of its EU-funded Challenge project, just launched in Asia, which is advocating at the intersection of freedom of expression and religious intolerance. All of these have worked with APC members as well as non-members.

But if subgranting is to grow as an advocacy mechanism for APC, what are the opportunities and challenges that it faces, given its commitment to building a network that is collaborative, and works towards realising shared ideals and concerns? What can we learn from APC’s subgranting experience, and what can its own experience tell it about how to move forward strategically, and coherently, as a membership-led organisation focused on human rights, social justice and the internet?

This report presents the findings of a discussion developed through a series of 11 interviews with APC members who were grant recipients of its core subgranting programme, as well as staff working on subgranting in the organisation. It includes a review of project reports, and a survey sent to all grant recipients, as well as those who have been the recipients of subgrants as part of the “Connecting the Unconnected” project.