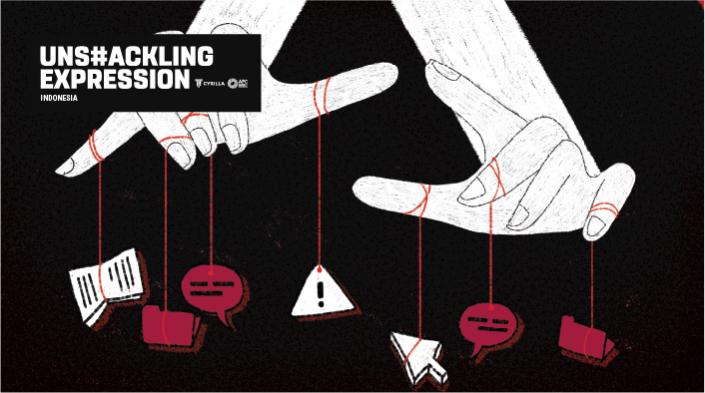 Is Indonesia slipping back in terms of promoting freedom of expression online? Does the country have laws in place to protect its citizens’ right to free speech and expression? Are these laws being implemented in a way that promotes human rights or are the same laws being used to curtail freedom and self-expression?

These are the questions that the report Unshackling Expression: A study on online freedom of expression in Indonesia attempts to answer. Developed by the Association of Progressive Communications (APC) and Alghiffari Aqsa, founder of the AMAR Law Firm and Public Interest Law Office, the report provides an overview of how Indonesian laws and policies protect or curtail freedom of expression online. This report was produced through the CYRILLA initiative.

The World Project Rule of Law Index for 2020 reflected that Indonesia takes the 79th place regarding the implementation of human rights out of 128 countries surveyed. The right to civil and political freedom in the country scored 61 out of 100. Meanwhile, according to the Economist Intelligence Unit (EIU), the country ranks 64th out of 167 countries in terms of how democratic the government rules. On a scale of one to seven, Indonesia has 3.2 points in relation to protecting human rights, with the worst measurements showing for the promotion of right to freedom of religion and belief and freedom of expression.

This new study follows the format and analysis of the 2017 APC report Unshackling Expression: A study on laws criminalising expression online in Asia. The methodology employed a normative-empirical legal research carried through the analysis of written regulations and cases related to freedom of expression and right to free speech online. The study also looked into bills that, while not entirely related to freedom of expression and the right to free speech, may be used to curtail dissent and criticism of the government and certain groups.

The report found that compared to previous years, Indonesia is doing worse in terms of promoting human rights and democracy. While the country has a number of regulations that protect freedom of expression online, it also has laws that may be applied to prosecute individuals who are attempting to voice dissent, criticise or merely state an observation. Such laws include the Criminal Code, Information and Electronic Transactions (ITE) Law, the State Flag and Symbol Law and the Pornography Law. A threat also lies in the passing of the Criminal Code Bill as it maintained articles often used to criminalise freedom of expression and will also revive articles that were revoked by the Constitutional Court.

Apart from the observations above, the report also sheds light on how these laws are implemented and applied in cases. Such examples include the use of the ITE law against Papuan activists and the allegations of hate speech against human rights activists. The laws governing hate speech, which were originally passed to protect minority and vulnerable groups, are being used to silence dissenters and activists critical of the government. The report also notes that attacks on freedom of expression are becoming diverse in the country. In the past, freedom of expression online was generally attacked in terms of alleged slander, defamation and blasphemy. Now, the state and other actors have learned to use laws on treason, hate speech and fake news to prevent people from speaking out online. Attacks against free speech are made worse by other tactics that include buzzing (trolling), hacking, bullying and shutting down the internet.

To counter such attacks, it is recommended for the state to review how laws related to freedom of expression and the right to free speech are being implemented and used in cases. It is pertinent that law enforcement agencies are well-versed in such laws and policies and are knowledgeable enough to apply these laws to cases where these laws and policies are actually applicable. Further, the state and the law enforcers should understand the principles of freedom of expression and human rights including the Johannesburg Principles, the Camden Principle and the Siracusa Principle. Lastly and most importantly, there is a need to reiterate and uphold accountability of officials implementing the laws either through strengthening supervisory institutions or reforming criminal procedural law in a way that strictly adheres to human rights principles and protection.