GISWatch launch at the Internet Governance Forum: Artificial intelligence and human rights at the forefront 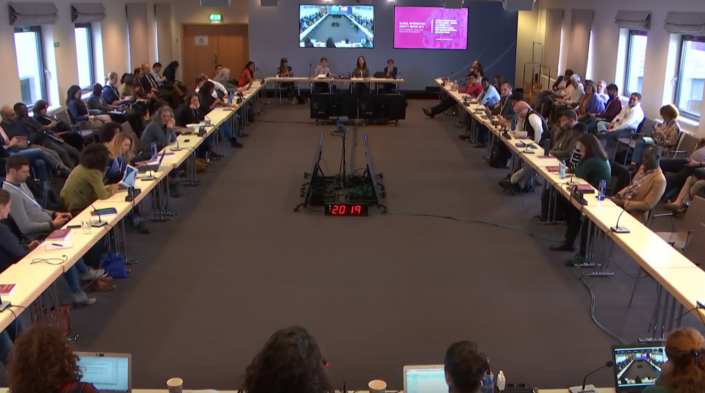 The annual Global Information Society Watch (GISWatch) report has come to be an important publication for APC, as each year the theme reflects a topic or issue of great relevance for the network. This year’s theme of “Artificial intelligence: Human rights, social justice and development” was extremely timely, as evidenced by the high number of panels and sessions that took place at the Internet Governance Forum (IGF) in Berlin that centred around the topic of AI.

“There is a huge hype around AI”

Between 25 and 29 November, 2019, the Internet Governance Forum (IGF) saw several thousand people gather to engage in multistakeholder discussions on internet governance. On Thursday, 28 November, the Association for Progressive Communications (APC) and partners ARTICLE 19 launched the 2019 edition of GISWatch to a packed room of attendees. Over 20 authors were present from around the world to introduce themselves and their research, and the presentations were followed by a round of questions and answers along with a history of the publication of the GISWatch report and presentations from APC and ARTICLE 19.

The prevalence of AI-related topics at this year’s IGF did not go unnoticed by authors and guests. As pointed out by Rachel Adams of South Africa’s Human Sciences Research Council, “There is a huge kind of discourse and hype around AI”. It raised the proposal from the audience that with all the capable people doing excellent work on AI research, it would be a good idea to create a dynamic coalition (DC) that deals with AI and its challenges.

Alex Comninos, who was part of a team that wrote a thematic report on AI for sustainable human development, raised an important point during the discussion, noting, “It’s quite frustrating for people who have been involved in ICT policy and ICT development for decades. Suddenly AI comes, it’s ‘hypey’ now, there’s this thing called the ‘AI effect’. In a year or two we’re just going to call it computing or ICTs so let’s actually look at national legislations, see what’s there, see where we can build capacity and also look at international law.” His observation that “it definitely has to be regulated as AI in certain contexts but let’s not reinvent the wheel and let’s not lose what we’ve built” gave grounding and context to the question on ways to move forward.

So what are some next steps for researchers and human rights advocates working on AI, particularly considering the impacts on civil society and, more precisely still, those in the global South who are often the most vulnerable to policies written by and large in the global North? Anriette Esterhuysen, APC’s senior advisor on internet governance, policy advocacy and strategic planning and the incoming chair of the IGF’s Multistakeholder Advisory Group, posed the following question to authors: “When you were looking at policy interventions, and the required policy and regulatory interventions, where do you think they need to come from? Do they need to be nationally driven? Is there a need for global standards?” She furthermore expanded, “Where does one start this process of creating a policy and regulatory environment that can ensure that the concerns that have been identified are addressed? Where do you think the leverage is? Where do we start with our interventions?”

Daniel Mwesigwa from CIPESA, who wrote the report on modern surveillance tools in Uganda, responded with a vital note that resonates throughout the entire GISWatch report, namely, that it is critical to look at the issue from a global South perspective. According to him, “First we must assume that we are not operating under mature, democratic systems and also not operating under guaranteed human rights frameworks.”

Joana Varon from Coding Rights in Brazil and one of the authors of the thematic chapter looking at decolonising AI through a transfeminist approach to data and social justice noted that the answer is multi-layered. She pointed out that one approach involves “going directly to the companies or even directly to who is funding those projects”. However, looking at the situation is Brazil, where the government is far right, she notes the challenge of being not only heard, but also not being discriminated or persecuted.

The answers, where they exist, on how to build people-centred AI that puts human rights first are certainly complex and often raise further questions. The launch of GISWatch at IGF touched on some of these key issues and it was a special opportunity to gather so many researchers and activists to explore paths for moving forward. We thank all authors and the teams involved in putting together this important edition.

The entire launch of GISWatch at IGF is available for viewing online.