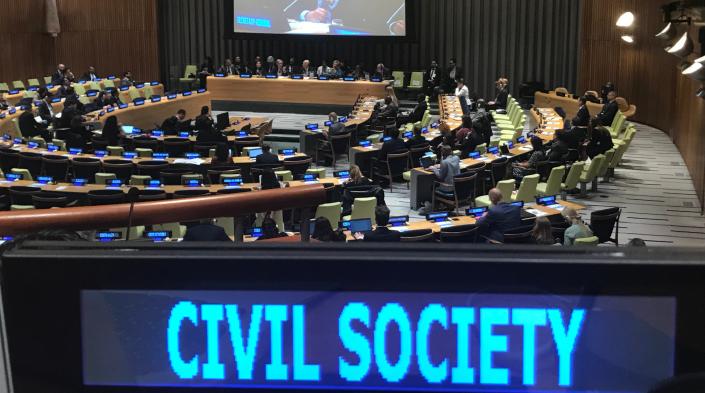 Background: In July 2018, the United Nations Secretary-General announced the creation of a new High Level Panel on Digital Cooperation. In advance of the Panel's first meeting, the Association for Progressive Communications (APC), together with civil society partners, issued an open letter to help shape the Panel's work. Over the last year, APC and member organisations have contributed to a series of consultations carried out by the Panel. On 10 June 2019, the Panel's report was made public and the Secretary-General and members of the Panel held a briefing at the UN General Assembly. APC had the opportunity to participate in the briefing and made the following statement. Further analysis of the implications of the report will follow.

Thank you, Mr. President, Secretary-General, members of the High Level Panel and distinguished delegates. I am speaking on behalf of the Association for Progressive Communications, an international NGO and network of members working mostly in countries in the global South. Our vision is that all people have easy and affordable access to a free and open internet to improve their lives and create a more just world.

APC, and some APC member organisations, participated in consultations on the Panel’s work, and we offer our congratulations on the launch of the report. We appreciate the Panel’s openness to stakeholder input, and look forward to reviewing it in more detail. For now would like to offer some initial reflections and questions.

Meaningful access to and use of digital technologies is a necessary precondition for participation in today’s society. As the report notes, more than half of the world's population still does not have meaningful, affordable access to the internet. We hope the report’s recommendations can help mobilise  the resources and political will in the various parts of the UN, and beyond, needed to end digital exclusion.

We agree that multilateralism and multistakeholderism are both necessary and can coexist. Both must be strengthened, and particular focus is needed to bring far more diverse voices to the table to ensure that such processes are inclusive and reflect the needs of those facing digital exclusion and who are affected by standards and frameworks agreed to, whether at the UN General Assembly, Human Rights Council, International Telecommunication Union or Internet Governance Forum. Particular attention is needed to include voices from developing countries and traditionally marginalised people and groups, women, youth, indigenous people, religious and ethnic minorities, rural populations and older people.

APC is pleased to see that the report reinforces that international law, in particular international human rights law, applies online. We welcome the Panel’s recommendation that the Secretary-General institute an agencies-wide review of how existing international human rights standards apply to new and emerging digital technologies. In doing so, we encourage the Secretary-General to work with human rights treaty bodies, which are charged with interpreting human rights standards, and are already reviewing the applicability of human rights treaties and standards online, as well as UN Special Procedures, which have already made substantive contributions in this regard. We trust that efforts to mainstream interpretation of human rights in digital contexts  in the UN system includes efforts to interpret responsible state behavior in cyberspace, as well as other cybersecurity related processes.

We have a few questions for the Panel:

1. We look forward to delving deeper into the details on how the three proposals for how digital cooperation would work at the international level. For any of these models to succeed, significant political will among all stakeholders will be required. What are the plans for consultations and socialising them moving forward, and how might civil society engage in these consultations?

2. The ultimate beneficiary of the digital cooperation and the recommendations of the report are people. It has been mentioned a few times that the report is the beginning of a conversation. What plans are in store to ensure that the outcomes of this report reach those most affected in accessible language, and that the conversation engages them moving forward?

We appreciate the Secretary-General’s leadership on this issue, and look forward to continued engagement.

To watch this statement being presented on UN WebTV, click here (starting from 1:38:30).