WOUGNET: Flattening the COVID-19 pandemic curve calls for a fight against misinformation and disinformation

Home / News / WOUGNET: Flattening the COVID-19 pandemic curve calls for a fight against misinformation and disinformation 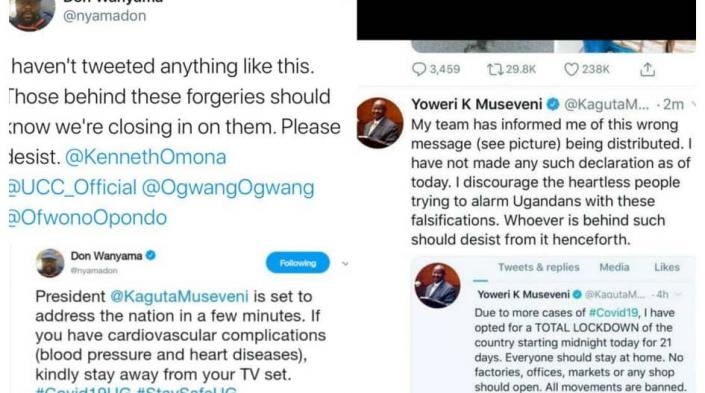 This article was originally published on the website of the Women of Uganda Network (WOUGNET), an APC member organisation.

In the quest to flatten the contagion curve, social distancing and lockdowns are measures that every country has done or is planning to do as the world is faced with the fight against the novel coronavirus. On 11 March 2020, the World Health Organization (WHO) declared COVID-19 a pandemic in a media briefing by WHO Director-General Dr. Tedros Adhanom Ghebreyesus.

Uganda confirmed its first case of COVID-19 on 21 March 2020 and a month after that, the total number of cases rose to 61, with 45 cases of recoveries and no cause of death yet.

All efforts are being done with the focus on flattening the curve by governments globally. However, we are faced with a huge challenge of misinformation and disinformation both in the online and offline spaces. This can start online and then the same information gets to the offline space, and vice versa. The misinformation has caused panic and fear, and people are making irrational decisions on the steps to keep safe and maintain their economic stability. Lately, Uganda has seen a lot of COVID-19-related fake news on social media platforms like Facebook, Twitter, Instagram and WhatsApp. Prior to Uganda confirming her first case, there were already speculations moving around that “the country had COVID-19 cases and death due to the pandemic although the government did not want to declare it.” This caused a lot of fear and distrust in the information that we were being given by the Ministry of Health.

The pandemic being unprecedented has caused conversations over its possible treatment. Different information has been circulated on social media platforms claiming that drugs used for treating malaria could heal COVID-19 patients, and people have been cautioned in those messages to stock drugs like quinine. Antiretroviral (ARV) medication is also one of the drugs rumoured to be the treatment for the virus; this led to relaxation among some of the HIV seropositive population on following the safety precautions being given by the WHO and Ministry of Health.

On 16 March 2020, a video went viral of the speaker of parliament Hon. Rebecca Kadaga saying Uganda was going to make the COVID-19 vaccine. This caused a lot of debate among medical practitioners and key stakeholders who questioned the speaker on her statement.

The police on 14 April 2020 arrested one Robert Mijumbi, a student of Kyambogo University, following a video clip that he posted on YouTube which later went viral on different social media platforms. The accused claimed he had found a cure for COVID-19. The National Drug Authority and medical team have come up to refute such misinformation and disinformation that is affecting the fight against the pandemic.

In some scenarios, misinformation and disinformation have come from very influential people like religious, political, and cultural leaders. Pentecostal Pastor Augustine Yiga, of the Revival Church in Kawaala in Rubaga Division of Kampala, was remanded on charges of uttering false information and spreading harmful propaganda likely to cause the spread of the deadly COVID-19  disease. On 27 March 2020, Pastor Yiga, while preaching at his church and before various television stations, uttered words that were broadcast that there is no coronavirus in Uganda and Africa. This is an offense contrary to section 171 of the Penal Code Act.

In rural areas, however, misinformation and disinformation manifest differently compared to the urban areas. These communities depend on information from radio stations, although not all families own radios – the majority rely on the hearsay from the privileged community members who can access the internet, who are connected to relatives in the urban areas or receive messages sent on their phones through the telecom companies. Although the government has made initiatives to create awareness on COVID-19 in the rural areas, many communities have not been reached yet.

Women are more vulnerable to misinformation and disinformation because not many of them can access and use information and communications technology (ICT).  A study by the Uganda Communications Commission on Access and Usage of ICTs revealed that only 44% of women owned and could use a phone at any time, compared to 62% of men. It further revealed that only 15% of women had used a computer or the internet in the last three months prior to the study, compared to 21% of the men that were interviewed. The few women who access and use the internet still lack exposure to the tools to verify the information they receive, and then the unconnected women depend on news from their spouses, relatives, friends who own phones, radios, etcetera.

A knowledge gap on COVID-19 still exists in the rural areas. According to some communities, COVID-19 is thought to be a disease for the "white people", "people who travel by airplane", "Kampala people"; this kind of misinformation has made most of the rural communities relaxed about following the safety precautions given by the WHO and Ministry of Health.

Therefore, fighting fake news cannot be left to the governments, but rather every stakeholder should take part. Politicians, religious leaders, media houses, journalists, civil society organizations, companies, celebrities, should be at the helm of sharing the right information, because they have big followings and are influential in the societies. Extra efforts should be made to reach out to rural communities.

Multilateral companies, organizations and institutions have been working to counter fake news, and others have launched sites where information can be obtained and fact-checking can be done on the COVID-19-related information being received.

The Ministry of Health has a platform on their website where the right information can be accessed by the public.

Facebook has created the Coronavirus Information Center which gives real-time updates from national health authorities and global organizations like WHO. I think Facebook has pretty much tried to control fake news on the Facebook platform, however, the WhatsApp platform has a huge amount of false information being shared every second and this calls for action.

Google announced that it is blocking more than 18 million hoax emails a day as criminals try to snare victims with COVID-19 scam messages.