Why "real men" don't use telecentres in the Philippines

Home / News / Why "real men" don't use telecentres in the Philippines 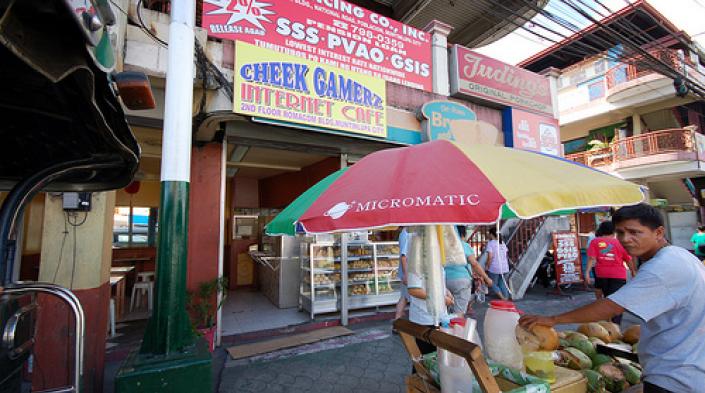 While in Africa and Latin America organisations are trying to make telecentres more accommodating to women’s needs, telecentres in the Philippines are attracting far more women than men. How can telecentres be a leveller for women’s and men’s access to the internet given that Filipino men primarily choose commercially-run internet cafes over the more socially-focused telecentres where games and pornography are not allowed?

A study which looked at two rural telecentres using the APC’s Gender Evaluation Methodology (GEM) revealed the reasons behind this self-imposed segregation, how Filipino men and women use the internet differently and why telecentres are seen as mostly female spaces.

“I was surprised with the results that we got,” says study coordinator Angelo Juan Ramos. “I was not aware that the main perception in the communities was that the telecentres were a place mostly for women or where the services cater more to women.”

Wanting to learn more about this project and what they learned from the study APC talked to Angelo who works for the Molave Foundation which with funding from the National Computer Center and APC led pilot studies in two different rural communities – Binalonan, a land-locked agrarian community and Bato, a small fishery-based community. Their pilot study and adaptation of the GEM materials were so successful, that GEM will now be used in hundreds of telecentres in the Philippines.

The Molave Development Foundation http://www.molave.org works is one of the Philippines’ most active organisations in poverty reduction, health education and and sustainable development through the use of ICTs. Molave is currently the chair of the Philippine Community eCentre Network (PhilCeCNet) http://www.philcecnet.ph, a multi-stake-holder learning and collaborative community for eCentres. PhilCeCNet has been active in forging strategic partnerships with various organisations and initiatives, so that the shared skills and expertise of the network benefit telecentres across the country.

After having worked with PhilCeCNet for several years, APC approached the organisation in 2008 to pilot GEM in two telecentres in which training design and flow were used to develop a GEM telecentres guide.

APC: So access to internet and technology is not really an issue in the Philippines like it is in other developing countries?

Angelo Juan Ramos, PhilCeCNet: The Philippines has a rather unique gender situation compared to other countries in Asia. Due to factors like history, religion and culture, gender equality in terms of access to ICTs is not an issue per se. Rather, what is interesting to note and to do further study on is the difference in how males and females make use of ICTs.

APC: What did the GEM study tell you about how are the men and women in your communities are using the internet?

We learned the women in rural areas use CeCs and internet cafes for social purposes like chatting with friends and family abroad. They look for friends and potential spouses, preferably foreign, because they see it as a ticket to a better life. They see the internet as a tool for them to reach out to others and to learn more about the world.

For senior women, ICT and the internet is a whole new world. They go to telecentres to chat with family abroad, share family photos and see their children and grandchildren on webcam. Voice over IP is a real winner!

But people sometimes feel that in telecentres they don’t have enough privacy, which may very well be the case. Maybe cyber cafés are more “impersonal” and activities are not so closely followed by personnel.

Men on the other hand generally use the internet for games and sometimes pornography, so they don’t really feel the need to go to a telecentre, since games and pornography are not allowed in CeCs. They tend to see computers as a technical device that can be used for work, earning money and for entertainment. As a result, men spend more time in internet cafés than in female-dominated telecentres (if at all). In fact what was revealed to us during focus group discussions in the community of Bato was that men who do go to telecentres might be viewed as gay or “not real men”.

APC: However not all men felt uncomfortable in the telecentres. Within the men studied you found interesting differences within the different age groups.

Yes. Young boys went to the telecentre when they wanted to do school work and to the cyber cafés for games and chatting with friends.

Male seniors wanted to be trained and become themselves trainers to other seniors. They seemed to be more comfortable in telecentres than in cyber cafés.

I was surprised with the results that we got from the surveys we developed and administered using GEM in the pilot areas. I was not aware that the main perception in the communities – that the CeC is a place mostly for women – or where the services cater more to women.

APC: How will the GEM findings change things in the telecentres in the future?

Angelo Juan Ramos, PhilCeCNet: Now that these results are in, the Commission for Information and Communication Technologies (CICT) of the Philippine government will use them to plan on how to address the gender issues and encourage men to use telecentres.

Part of the problem was also that many people, especially men, were not aware of the existence of telecentres, so this is also something we will work at changing.

One thing is for certain though – CeCs are providing services and a safe environment that women were missing in internet cafes.

This is actually one of the most important aspects of GEM and gender analysis – understanding the communities that the telecenters are trying to reach and understanding that the services they provide have to consider gender, age, work, perceptions of the community and values within the community. As a result of using GEM, telecentres are becoming more focused on the users.

APC: Your project was already up and running for a long time so was it difficult to incorporate GEM?

Angelo Juan Ramos, PhilCeCNet: We piloted GEM in two community telecentres – Binalonan and Bato – and used it throughout the whole process, from planning and design to implementing and monitoring and evaluating. The CeC managers from both communities also had prior GEM orientation training with the APC and where necessary we also adapted GEM for use in telecentres.

Since GEM is a workbook, we tried to follow it the way it was designed, with the seven steps from the beginning to the end of the project cycle. However since our telecentres were already up and running and we couldn’t go back and re-plan the telecentres from the beginning, we introduced GEM as soon as we could, which was in the middle of the project cycle by asking the telecenter managers to add gender-separated indicators where possible.

For example, if they were counting the number of users in a day, we asked them to divide the columns to include the number of males and number of females, their ages, etc. Since these changes were minor, it was not difficult to adapt GEM in this case. It would have been a lot more difficult to ask them to go back in their log books and divide the data that had not initially been segregated. Instead, we just logged the gender-specific data from when we started using GEM.

So despite our “disadvantage”, we were still able to benefit from the study and get some concrete results that will help us plan our next telecentre steps. Both telecentres have now incorporated segregated data based on the sexes and the data should be ready by the end of 2010.

APC: What changes has GEM generated into how you work?

Angelo Juan Ramos, PhilCeCNet: We have become more aware of, and sensitive to gender issues, and are more careful to integrate gender in the development of indicators for monitoring and evaluating our projects.

For our quantitative methods, we have come up with indicators to monitor and evaluate the CeCs, that were collected separately for male and female users (in the number of clients being served, the services being used, etc.).

As for the qualitative approach, we are making sure that when we conducted focus group discussions with the different groups in the community, that we have separate sessions with males and females (i.e. male and female groups of fisherfolk, senior citizens, students, etc.). Also, when we do key informant interviews, we make sure to get an equal proportion of male and female respondents.

We also learned a lot from the qualitative approaches GEM suggests, using tools like digital stories and case studies. For example, when we do an exercise on identifying the evaluation users with the community, we also ask our participants to think about the type of results each group of users need.

Government officials and planners prefer hard data (graphs, percentages, statistics) in order to evaluate the performance for the telecentres whereas local village leaders, women’s groups, students and others might better respond when shown digital stories or given some other oral stories.

We found that in many cases, it’s good to have both quantitative and qualitative results, to ensure that the end-users of the evaluation process get the entire picture of the situation, from all possible angles and viewpoints.

I had to come up with my own design using both types of tools – GEM and tools that we use as epidemiologists (software such as Epi Info but we also made use of online tools such as Google Docs to share data, and even Excel). We also made use of Rapid Rural Appraisal, Delphi Techniques and World Cafe. Even though the guide contains methods on how to respond to the gender issues, when used together, both methods complement each other well.

APC: What’s ahead for the telecentre network in the Philippines?

Angelo Juan Ramos, PhilCeCNet: The next step for the telecentre or CeC movement in the Philippines is integrating gender issues into the training and capacity building of CeC knowledge workers, and in getting telecentres and CeCs to learn how to effectively monitor and evaluate. We’ll be using GEM for these purposes because we feel it is a very effective monitoring and evaluating tool.

The PhilCeC network will soon be conducting our strategic plan for the next six years. As chair of the PhilCeC network, I will lobby and advocate for the inclusion of a gender perspective and GEM because it is important to achieving a balanced and appropriate participation from both sexes. If it is included, gender will be a very important cross-cutting issue for these centres and evaluating the impact of gender in this process.

Another way to integrate GEM from the top and planning level of the network is through a capacity-building programme for all the CeC managers and knowledge workers that we are training. Over the next four months, we’ll be conducting training for 400 to 500 telecentre managers. We will offer a five-day certificate course in CeC management, which includes a section on monitoring and evaluating. I will be managing that course so I will certainly include some aspects of GEM in the training. We need to advocate gender, and by extension, GEM, in our CeC Management Training Courses. We need to do this so that CeC knowledge workers will have an awareness and sensitivity about gender as an issue in ICT for development and this is a good way for them to incorporate this awareness and sensitivity in the way they plan, manage, monitor and evaluate their telecentres.