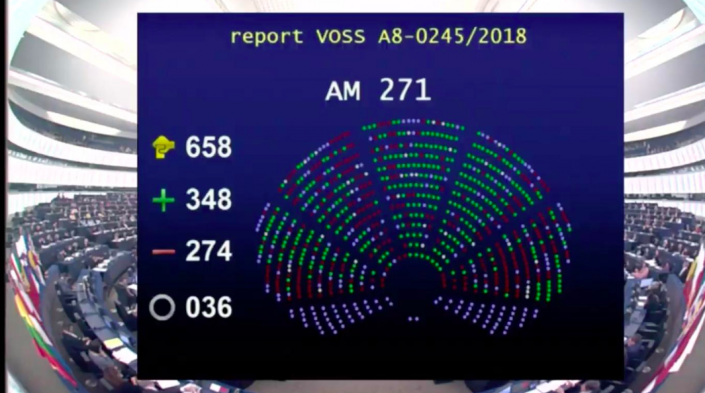 The updated EU copyright directive, which was voted on and approved in Strasbourg on Tuesday, 26 March, is considered by free speech campaigners as a “victory of the censorship machine".  The vote came after large mobilisations by civil society to raise awareness of the negative impact of Article 13 (previously Article 17) of the draft directive, which involves imposing widespread censorship of content shared online. This past weekend, up to 200,000 people took to the streets across Europe, and a petition against it has reached over five million signatures.

According to the European Digital Rights initiative (EDRi), the draft Directive on Copyright in the Digital Single Market text, which was approved by a vote of 348 in favour and 274 against, forces the implementation of upload filters and, in effect, could lead to unlawful restrictions on freedom of speech and reduce access to knowledge.

In the words of David Bravo, a Spanish lawyer specialising in intellectual property rights who travelled to Strasbourg with the Freedom of Information Defense Platform, the directive expresses in a more explicit way issues that previous versions left implicit.

Asked by APCNews about what the most dangerous parts of the directive are, Bravo responded, “With the new regulation, the notion of intermediaries disappears. Intermediaries will now be considered providers and, as such, responsible for all content shared by users."

He added, "The whole directive involves a shift in paradigm, leading to internet spaces not owned by major production companies being strangled. Authors, artists, creators will have no alternative ways to share their work and will stay dependent on conventional distributors, and I think this is key. This is what really is at stake.”

The passage of the EU copyright reform has the potential to reverberate outside the EU. According to Deborah Brown, APC's global policy advocacy lead, "Transforming intermediaries into providers that are liable for content uploaded by their users and empowering tech giants at the expense of small independent authors, artists and creators, are exactly the type of bad regulations that set a precedent for governments around the world to follow. Users across the globe may well see a rise in automated censorship and filtering thanks to the European Parliament."

In reaction to the vote, Creative Commons wrote: "We’re disappointed with the decision to push through Article 13 and 11, but the directive is not a total wash. There are some productive changes that will improve the situation of the commons, libraries and cultural heritage, and research sectors. For example, the directive includes a provision to ensure that digital reproductions of public domain works don’t get a separate copyright and will also be in the public domain."

The final text of the European copyright directive, despite the few productive changes mentioned, reflects a dangerous trend in attempts to control the internet to benefit tech giants and powerful rights holders at the expense of independent authors, and also poses a threat to users' rights and the public interest. It will be up to us, defenders of internet freedom, to continue to fight for an open internet that does not hinder creativity and freedom.