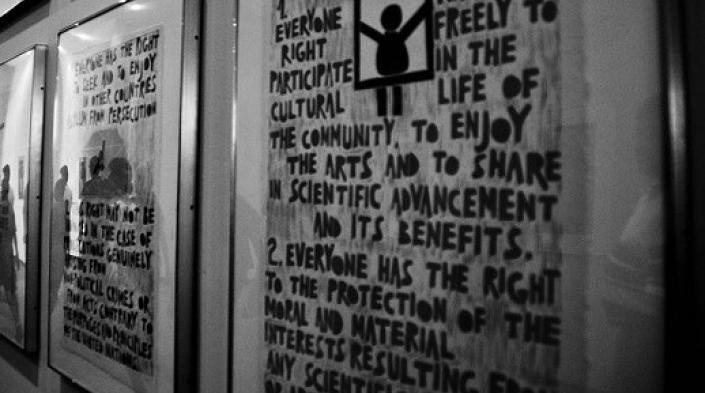 By Mehar Gujral for APCNews

“We welcome your critique regarding access to the internet and agree with most, if not all, of your criticisms,” stated South Africa’s Deputy Minister of International Relations Luwellyn Landers to the United Nations Committee on Economic, Social and Cultural Rights during the country’s first review at the Committee, which took place on 2 and 3 October.

The UN Committee on Economic, Social and Cultural Rights oversees the implementation of the International Covenant on Economic, Social and Cultural Rights (ICESCR). Signed by former president Nelson Mandela in 1994, the ICESCR only became legally binding in South Africa when it was ratified by the government in 2015, and closely mirrors the Constitution by requiring the state to ensure the socioeconomic rights of its citizens. South Africa’s appearance before the Committee marked several concessions in relation to access to the internet and addressed other human rights concerns including health, housing, social security, and equal pay for equal work, among others.

Prior to the briefing, the Association for Progressive Communications (APC), Media Monitoring Africa and the Right2Know Campaign made a joint submission to the Committee that focused on access to the internet in South Africa – particularly for disadvantaged and marginalised persons and groups, including those living in rural and remote areas – and the extent to which the government of South Africa is ensuring that people are able to benefit from the potential of the internet as an enabler of economic, social and cultural rights (ESCRs).

While access to the internet is not a human right, affordable access to the internet has become a necessary precursor to exercising human rights today because it acts as an important enabler for the equal enjoyment of a wide range of rights, including the rights to work, healthcare, education and participation in cultural life. It was anticipated that the internet would be a critical tool in the realisation of people’s ESCRs, but evidence suggests that the poverty gap is increasing and a global minority has become the primary beneficiary of the internet.

In addition to cost, people face barriers to full and high-quality access to the internet for reasons of gender, language, education, geographic location, and other economic, social and cultural factors. There is more attention required to bridge digital divides, particularly in relation to cultural minorities, older persons, and disadvantaged and marginalised groups, including women and children, and to ensure that the internet does not deepen disparities in the enjoyment of ESCRs.

In response to the challenges presented in the Coalition report, Committee member Laura-Maria Craciunian-Tatu raised the issue of the high costs of broadband in South Africa. Speaking to the country’s racial and socioeconomic inequalities, she found that the ability to freely access the internet is not only unaffordable but illusory for certain segments of the population when residents of the two major cities, Cape Town and Johannesburg, spend more on monthly internet costs than people in Zurich or New York.

Deputy Minister Landers embraced the critiques of Craciunian-Tatu and recognised the inadequacy of current initiatives to provide free public access to the internet for the poor and the unemployed, attributing this to the lack of synergy and functional coherence between the three spheres of government and the private sector.

Quoting from the address of South African President Cyril Ramaphosa at the International Telecommunication Union (ITU) Telcom World 2018, Landers stated, “We have the means and the responsibility to direct technology.” With 20 million South Africans lacking access to the internet, he further affirmed the government’s commitment to sit down with the telecommunications industry and other stakeholders to ensure that the allocation of spectrum reduces barriers to entry, promotes competition, and reduces costs to consumers.

Landers posited, “Without the private sector entering into a social compact with government and civil society to drastically bring down the costs of data, our vision for the progressive realisation of access to the internet by the majority of South Africans, and in particular the poor and working class, will remain a dream.” He also thanked South Africa’s vibrant civil society for their advocacy and efforts to achieve universal access to the internet. APC’s Local Access Networks project has worked with local actors to connect rural South Africans to affordable internet access by promoting local access infrastructure models such as APC member Zenzeleni Networks, a community-owned internet cooperative based in Mankosi, Eastern Cape.

The “concluding observations” of the Committee incorporated recommendations from the Coalition report, noting with appreciation the efforts of the South African government to address the disparities inherited from the apartheid era, while stating concern “at the low rate of internet access, and at the lack of affordability of the internet for the most disadvantaged groups.” The Committee encouraged South Africa to “adopt relevant measures to ensure the accessibility and affordability of the internet, particularly in schools, rural areas and for the most disadvantaged groups,” so as to comply with the rights to take part in cultural life and to enjoy the benefits of scientific progress and its applications, established in Article 15 of the ICESCR.

In his opening remarks, the head of the South African delegation, Deputy Minister of Justice John Jeffery, quoted famous words by Nelson Mandela: “But I have discovered the secret that after climbing a great hill, one only finds that there are many more hills to climb. I have taken a moment here to rest, to steal a view of the glorious vista that surrounds me, to look back on the distance I have come. But I can only rest for a moment, for with freedom come responsibilities, and I dare not linger, for my long walk is not ended.”

It is evident that with its appearance at the Committee, South Africa has recognised the long walk ahead with regard to the fulfilment of its commitment to economic, social and cultural rights under the ICESCR, specifically the essential role of access to the internet as an enabler of rights for South Africans. It is critical for the government of South Africa to continue to engage with civil society and other stakeholders to advance rights-based approaches to internet access.