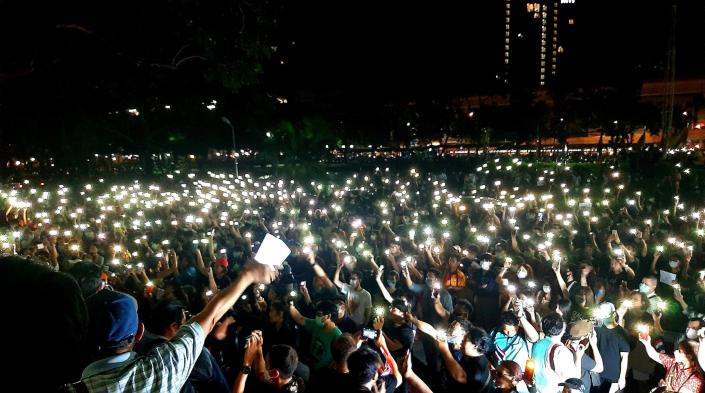 This article was republished from Coconet, a network co-organised by APC and APC member organisation EngageMedia.

Hope for political change in Thailand has grown stronger in 2020 after a wave of student protests across the country followed the constitutional court’s dissolution of the opposition Future Forward Party. This decision sparked flash mobs against the long tenure of Thai Prime Minister Prayut Chan-o-cha and his authoritarian regime, which has been in power since 2014. Between February 21 to March 14, 2020, there were at least 79 flash mobs in universities, according to the Thai Lawyers for Human Rights (TLHR).

This wave of protests, dubbed the “youthquake” phenomenon, is reflective of the political awareness among the Thai youth. With the youth on their side, pro-democracy groups saw the possibility that the pro-military government could be ousted.

But then came COVID-19. Student movements and physical protests were forced to suspend. The new normal became a condition that impedes social movements. Thai civil society was only starting to adapt when the Thai government hit the movement with more damning blows: the emergency decree that prohibits public assembly, meaning activism had to be practiced online instead. Thai authorities have also been taking an active role in monitoring online activities with using other measures amid the COVID-19 crisis that hamper freedom of expression online.

On top of these measures, the government’s Anti-Fake News Center (or, as critics call it, the “Fake News Center”) has also been criticised for its restrictions on rights to freedom of expression rather than dealing with disinformation. In the time of COVID-19, the centre is known to censor information and criticism against the government’s management of the pandemic. It has even pressed charges against citizens critical of the government; Danai Ussama, an artist from Phuket, was arrested by police under the Computer Crimes Act after he posted on an online platform that there was no screening of COVID-19 at the Suvarnabhumi airport after he got back from Spain in March 2020.

These measures are just some of the challenges for social movement in the time of COVID-19, especially on disseminating information to citizens. But dissent against the pro-military government does not and has not stopped in the time of COVID-19. In fact, the June 4 disappearance of political exile Wanchalerm Satsaksit in Cambodia reignited protests against the pro-military government, with more than 400,000 retweets of the hashtag #SaveWanchalearm just one day later.

Despite the ban on public assembly, the youth have taken to platforms online and offline to vent out their frustrations, even if those who participated in protests have been summoned by the police on Emergency Decree charges. Online, however, the Thai youth continue to protest, using social media to voice out their criticisms against the government.

Previously, a protest consisted of people gathering in physical, public places. But when this became an impossibility in the time of coronavirus, the flash mobs assembled instead on online platforms.

Twitter has become the space for freedom of expression in Thailand. It has become a platform for blooming political awareness while other spaces are restricted. On Twitter, a user can have many accounts and is afforded a sense of “anonymity” as compared to other social media platforms. Twitter responds to the needs of new Thai generation who want to discuss sensitive political issues and has opened up a space for political disparagement of issues that have been rare to be discussed and have never publicly manifested in any public space in Thailand before.

The use of hashtags (#) is a meaningful function used to rally together people because it allows users to gather and exchange issues on their interests. Over the past ten years of Thailand’s political conflict, the exchange of political opinions – especially online – has only increased. The youth consider political expression as the norm, and in the past year, many hashtags on politics and injustice issues were among the top trending topics on Twitter in Thailand.

One of the viral hashtags during COVID-19 is the hashtag #nnevy, when Thai Twitter users sparked a war against Chinese nationalist trolls and created “a new pan-Asian solidarity”. This happened after Chinese fans of Thai actor, Vachirawit Chivaaree, or “Bright” from the 2gether the Series, retweeted a tweet that called Hong Kong a “country.” Thai Twitter users retaliated against the online attacks on Chivaaree. Soon after, Twitter users from Hong Kong and Taiwan also defended the actor and the tweet, which led to the popular hashtags #MilkTeaAlliance and a Thai equivalent that translates to #MilkTeaIsThickerThanBlood. Reuters called this hashtag incident as an alliance between the pro-democracy camps against the pro-China cyber fighters. Even Joshua Wong, the Hong Kong pro-democracy activist, posted a photo of the actor with a message that Hong Kong was standing with the Thais who loved liberty and standing against the persecution by China. He even hoped for the building of an Asian alliance against dictatorship.

During the pandemic, together with the authority of the emergency decree, activities are restricted, and the student protests are postponed. The Student Union of Thailand then came up with an online campaign to “protest from home” by sharing photos or placards commenting on the government’s administration, with the hashtag #MobFromHome. And the hashtag topped the Twitter trend in Thailand. Recent twitter hashtags have also been employed to express sensitive political opinions. As a result, sensitive political issues have become something publicly discussed on Twitter. Hashtags, therefore, have become a form of collective action.

Apart from using hashtags, pro-democracy activists online have also adapted a strategy called “bombardment”, or “ทัวร์ลง”, in which a user asks other users to collectively criticise a problematic post. In Thailand, this kind of online public mobilisation has been used against the government’s Information Operation (IO) that continue to monitor dissidents and critics.

Twitter, as previously mentioned, was the platform of choice for critics of the current regime to voice out their dissent. But on May 13, 2020, the official Thailand Twitter account @TwitterThailand was created with tweeting its first message, “Sawasdee khrap, Thailand” (Hello, Thailand!). On May 19, Twitter announced the update of its privacy policy to share users’ activities and IP addresses with “partners” to enhance its targeted advertisement.

Following these updates, #NoTwitterThailand topped the country’s trending page because Thais saw this as part of the government’s surveillance and the restriction of freedom of expression online. More users also began to doubt the security and privacy of the platform after Buddhipongse Punnakanta, the Minister of Digital Economy and Society tweeted about his recent discussion with Singapore’s Twitter executive on fake and violent news.

Aside from the trending hashtag, Thai Twitter users also encouraged others to stop using Twitter and move to “alternative platforms” that are open-source and decentralised. One popular alternative platform is “Minds”, especially after a co-founder of Thai Netizen, Sarinee Achavanuntakul tweeted, “Say goodbye to Twitter and meet at Minds.” Minds has also already installed the Thai language to accommodate Thai users.

This newer distrust of Twitter also poses open questions for the future and effectivity of online activism. Will enough Thai users flock to social media alternatives to reach critical mass, and therefore enact concrete social change? How do we continue to talk about diverse issues in online social movements? And, how do we transform awareness into the change we dream to see?

There are no easy answers to these questions. But in the case of Thailand, we have and continue to witness “youthquake” and increased political awareness among Thai students, seen as the new hope for political change. We also continue to witness how the open spaces online have led to more critical discourse against the government – and even more people who have changed their minds after seeing how the government has treated disinformation during the pandemic. What happens next, however, is up to us, the new generation, to determine.