Take Back the Tech! campaign wins ITU award for gender equality in tech 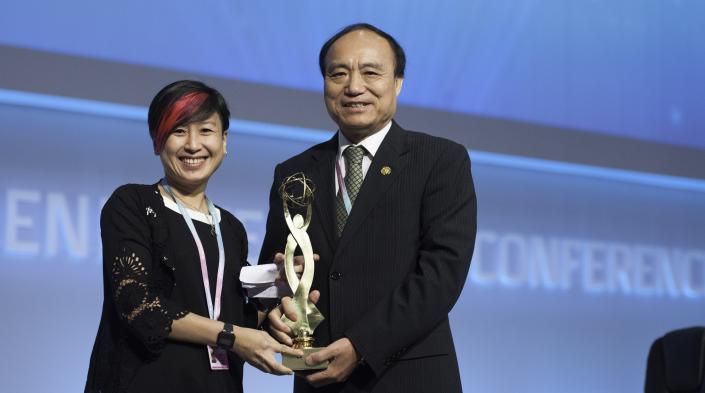 APC’s Take Back the Tech! campaign was globally acclaimed for its “efforts to reduce threats online and building women’s confidence and security in the use of ICTs,” winning first place in this first edition of the prize from over 360 nominations and 37 finalists from more than 70 countries under category 6. The Gender Equality Mainstreaming – Technology (GEM-Tech) Award is an annual special ITU-UN Women joint achievement award for outstanding performers and role models in gender equality and mainstreaming in the area of ICTs.

As stated by the organisers, “this annual award seeks to create a platform for advancing women’s meaningful engagement with ICTs and their role as decision-makers and producers within this sector. In considering ‘gender equality mainstreaming’ we are looking not only at ICT, government and development actors that are mainstreaming gender equality perspectives within their work, but also ICT and gender advocates that are seeking to ‘mainstream’ gender equality into a larger context.”

The awards were conferred on 28 October by ITU Secretary-General Dr. Hamadoun I. Touré before some 2,500 delegates at a special ceremony during the ITU Plenipotentiary Conference currently taking place in Busan, Republic of Korea. “It is almost 20 years since the Beijing Declaration and Platform for Action – so where do we stand today with reference to Gender Equality and Mainstreaming?” asked Dr Touré, who pointed to a “gender digital divide” that is particularly worrying in the developing world.

APC’s Take Back the Tech! winning initiative was represented by Jac sm Kee, Women’s Rights Programme manager, who received the award on behalf of APC and all the campaigners who make this collective campaign possible every year since 2006. APC was also a finalist under the same category for its Feminist Tech Exchanges initiative.

Take Back the Tech! is a collaborative campaign to reclaim information and communication technology to end violence against women. The campaign calls on all ICT users – especially women and girls – to take control of technology and strategically use any ICT platform at hand (mobile phones, instant messengers, blogs, websites, digital cameras, email, podcasts and more) for activism against gender-based violence. Take Back the Tech! accompanies the annual 16 Days of Activism Against Gender Violence (25 November-10 December) with actions that explore different aspects of violence against women and ICT. In 2014, Take Back the Tech! began the transition to a year-round platform, with the 16 Days as one of several key moments.

Since it began in 2006, the campaign has been taken up, adapted and owned by individuals, groups, networks and organisations all over the world. Campaigners have taken action and initiated local campaigns in Argentina, Indonesia, Pakistan, Bangladesh, Brazil, Cambodia, Sri Lanka, Fiji, Cambodia, Spain, Canada, the Republic of Congo, Germany, India, Macedonia, Mexico, Malaysia, the Philippines, Rwanda, South Africa, Uganda, the United Kingdom, Uruguay, the United States, Bosnia and Herzegovina, Kenya, the Democratic Republic of Congo, and more!

Within the scope of the 16 Days in 2012 and 2013, Take Back the Tech! partners carried out over 190 offline actions with the participation of more than 14,800 people in seven countries and globally. Take Back the Tech! is now a reference point for feminists, journalists and women’s human rights defenders globally.

APC thanks the ITU and UN Women for this important recognition of its work and welcomes the award as an incentive to continue on the path initiated eight years ago.

To interview our team members and partners or for more information, please contact us at info@takebackthetech.net

Watch a movie showcase of the 37 shortlisted nominees here.

About the Take Back the Tech! campaign
Take Back the Tech! is a collaborative campaign to reclaim information and communication technologies (ICT) to end violence against women (VAW). The campaign calls on all ICT users – especially women and girls – to take control of technology and use it for activism against gender-based violence.
www.takebackthetech.net