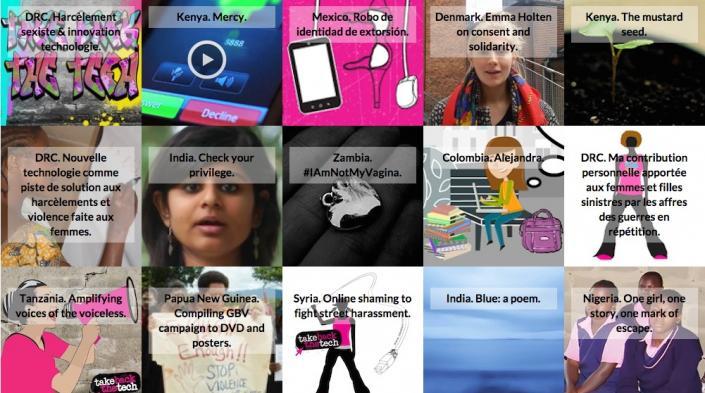 APC’s Take Back the Tech! campaign was recognised with an honorary mention in the 2014 Prix Ars Electronica under the “Digital Communities” category. This category focuses on the wide-ranging social and artistic impact of internet technology as well as on the latest developments in social software, user-generated content, mobile communications, mash-ups and location-based services.

Take Back the Tech! is a collaborative campaign to reclaim information and communication technologies to end violence against women (VAW). The campaign calls on all ICT users – especially women and girls – to take control of technology and strategically use any ICT platform at hand (mobile phones, instant messengers, blogs, websites, digital cameras, email, podcasts and more) for activism against gender-based violence. Take Back the Tech! accompanies the 16 Days of Activism Against Gender Violence (25 November-10 December each year) with daily actions that explore different aspects of violence against women and ICT tools.

The Prix Ars Electronica is staged jointly by Ars Electronica Linz GmbH and the ORF-Austrian Broadcasting Company’s Upper Austria Regional Studio in cooperation with the OK Center for Contemporary Art and Brucknerhaus Linz. It is one of the world’s premier awards honouring creativity and innovativeness in the use of digital media.

In 2013, the number of submissions to the Prix Ars Electronica’s seven categories surpassed 4,000 for the first time. To put this in historical perspective: when this competition premiered in 1987, three categories attracted a total of 700 submissions. The Prix Ars Electronica has constantly grown and developed over the years, and made quite a name for itself in the process. It is the world’s oldest and most renowned competition in media art. And a key reason for this success is the high quality of the judging. In each category, a five-person jury of international experts evaluates, critiques and discusses each entry and finally selects the best for honours.

A total of 2,703 entries from 77 countries were submitted for prize consideration to the 2014 Prix Ars Electronica, which recognised six categories: Visionary Pioneers of Media Art, Computer Animation/Film/VFX, Interactive Art, Digital Communities, u19 – CREATE YOUR WORLD, and the voestalpine Art and Technology Grant.

The Take Back the Tech! campaign was recognised with an honorary mention under the Digital Communities category, which focuses on innovation in relation to human coexistence, and sheds light on the political and artistic potential of digital and networked systems. Its main goals lie in first, bridging the geographical as well as the gender-based digital divide; second, bridging across cultural conflicts; and third, supporting cultural diversity and freedom of artistic expression. As such, “Digital Communities” selects a broad range of projects, applications, artworks, initiatives and phenomena around which social and artistic innovation is taking place, as it were, in real time.