Safeguarding freedom of religion or belief and gender equality at HRC43 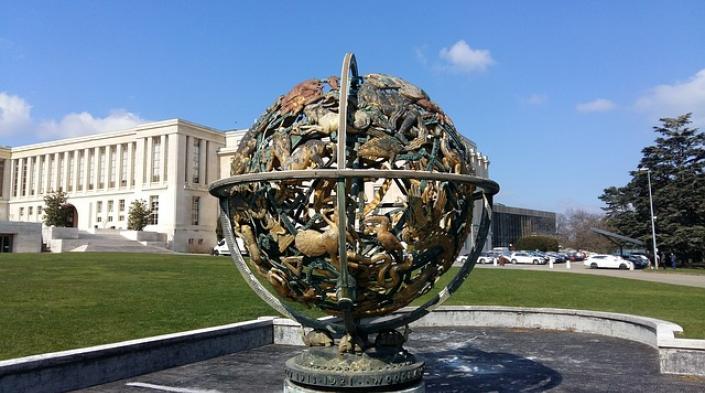 Twenty-five years after the adoption of the Beijing Declaration and Platform of Action, women and lesbian, gay, bisexual, and transgender persons continue to experience discriminatory practices throughout the world, sometimes in the name of religion. In this context, the Association for Progressive Communications (APC) participated in a side event at the 43rd session of the Human Rights Council (HRC43) to look at how to move forward on safeguarding the intersection of freedom of religion or belief and gender equality. The event, which was facilitated by APC's Asia policy regional coordinator Gayatri Khandhadai, coincided with the presentation of Special Rapporteur (SR) Ahmed Shaheed’s report on freedom of religion or belief, with a focus on gender equality.

“Freedom of religion or belief constitutes a fundamental priority for the European Union,” EU Ambassador at the United Nations Walter Stevens affirmed, referring to the resolution on freedom of religion and belief at the UN General Assembly and pointing to the context of the anniversary of the Declaration of Beijing.

SR Ahmed Shaheed stressed how religion, despite the positive role it can play, is often instrumentalised against rights of women, girls and LGBTIQ populations. “States should repeal gender discriminatory laws grounded on religious beliefs and must address gender-based violence carried out in the name of religion by non-state actors,” he highlighted, and added that “the right to freedom of religion protects individuals and not religions as such.”

In the words of Mona Rishmawi, Chief of the Rule of Law, Equality and Non-Discrimination Branch in the Office of the UN High Commissioner for Human Rights (OHCHR), “Gaining rights should not conflict with religious grounds. This should not be presented as a dichotomy; there should not be a hierarchy of rights.”

Erika Martinez, head of human rights at the permanent mission of Mexico to the UN in Geneva, echoed the Special Rapporteur’s recommendations. She stressed that Mexico, a country that has been instrumental at taking forward the gender conversation, is concerned that “some states still use sovereignty to justify human rights violations, particularly those that involve segregation of women and LGBT activists.” She also mentioned the importance of the private sector being at the conversation table.

Patricia Meléndez, head of civic space at ARTICLE 19, raised the case of increasing hate speech – offline and online – in the Middle East region. “Hate speech reflects power dynamics and needs to be addressed in an intersectional way, including a gender approach, but also issues related social inclusion.”

Burundi-based Imam Khalfan presented ImamsForShe, a global initiative that addresses misogynist interpretations of Islamic scripture and traditions that have led to human rights violations carried out in the name of Islam against women and girls. Following the lead of the #HeForShe campaign launched by UN Women, Khalfan offered a glimpse into how ImamsForShe works, including supporting and providing solidarity for Imams, Muslim leaders and Islamic scholars who actively advocate for women’s rights, women’s empowerment and gender equality. “Our organisation has worked on the rights of women because for a long time, women have been considered objects of value, objects of pleasure or even objects of sale, so our organisation was created to give legal status to Muslim women in Burundi," he noted.

“Activists all of the world have voiced that the main opposition to LGBTIQ inclusion is religious-based homophobia and transphobia. In Canada we have seen this to be true,” Canadian clergyman and gay rights activist Brent Hawkes pointed out. “Freedom of religion is being used to attack equality rights, but all rights are equal. Many LGBTI people are deeply religious; it’s important that both politicians and religious leaders stress how there is no conflict between religious beliefs and equality rights.”

A full video of the session is available to stream via Facebook: https://www.facebook.com/EUinGeneva/videos/544324766197997/

About the Human Rights Council

APC participates at the UN Human Rights Council, an intergovernmental body responsible for strengthening the promotion and protection of human rights around the globe, to raise awareness and build support for internet rights. Our participation includes the Universal Periodic Review (UPR), a unique process coordinated by the HRC, involving a review of the human rights records of all UN member states.