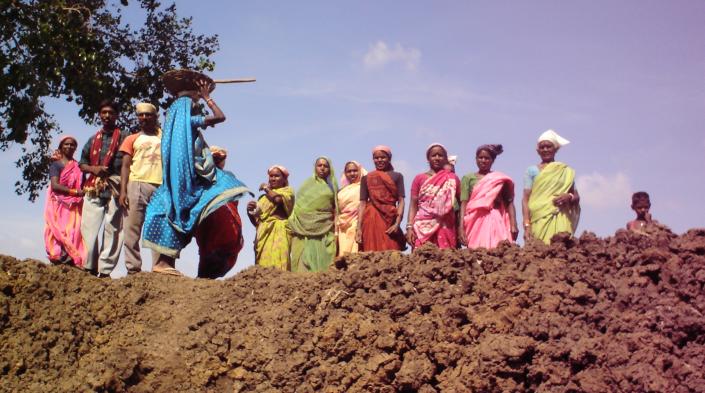 In India, a highly rural country, Simputers, a type of low-cost, portable alternative to PCs that require limited computer literacy, have been introduced to give a voice to the marginalized through their locally elected leaders. In 1993, the Panchayati Raj (village self-government) system was introduced as a tool to improve rural communities. Described as revolutionary, one of the key features was that 33% of elected seats were reserved for women, a quota that has also recently been increased to 50% in the state of Chhattisgarh, one of the poorest states in the whole of India, and where GEM evaluator Dr. Anupama Saxena of Guru Ghasidas University conducted her study.

However, her findings show that even with their presence in local governance officially guaranteed, women sarpanchas (democratically-elected village heads) have not been able to participate on an equal footing to men in rural governance.

When ICTs were introduced in 2005 in select village Panchayats, everyone expected the entire rural governance process to change with sarpanchas—both male and female—as the main beneficiaries. However, while women sarpanchas are apparently happy, enthusiastic and optimistic about using the technology, so far there have been no visible or tangible changes in their participation. The GEM study helped uncover why: numerous technical problems related to the Simputers and ingrained inequalities, meaning that even designated female representatives remain voiceless—something that an evaluation that does not focus on gender-related inequalities may not have unveiled.

Representation alone does not mean participation

The unequal participation of women sarpanchas in rural e-governance is the result of prevailing social cultural discriminations against women.

Differences between male Simputer use and female use are substantial: one in three males who were given a Simputer transferred information to and from it. Of the women, less than one in a hundred used it (0.7%) to transfer data. So while supposedly 33% of all local government heads are women, they are not actively participating in the process, and using GEM helped uncover why.

Lack of education, reproductive and productive roles, lack of financial independence and deeply rooted cultural and religious taboos make it difficult for women to be heard in traditionally male-dominated spaces like politics, and the negligible presence of women sarpanchas in rural governance is obvious.

“One of the Sarpancha’s husbands actually denied us access to his wife,” Dr. Saxena recounts. “He repeatedly told us over the phone that there was no need to meet his wife since she just stayed at home, and that she lived far away from the Panchayata she was representing, and that she never visited it. Instead, it was he who performed all the sarpancha duties.” Such stories were common in different variations.

“When we asked who the village sarpancha was, in most of the cases it was the name of the husband that was told to us and only after asking a second time and insisting on the actual name of sarpancha, the villagers informed about the women sarpancha.” The situation over the phone was similar – the husbands often identified themselves as the sarpancha and insisted that the information should pass through them as their wives “did not know anything.”

The few women sarpanchas who did take—and were able to take—their role seriously, were not taken seriously in official meetings. Continue reading this article.