Racism and Incitement Index 2020: The Increase in racism and incitement against Palestinians and Arabs during the pandemic

Home / News / Racism and Incitement Index 2020: The Increase in racism and incitement against Palestinians and Arabs during the pandemic 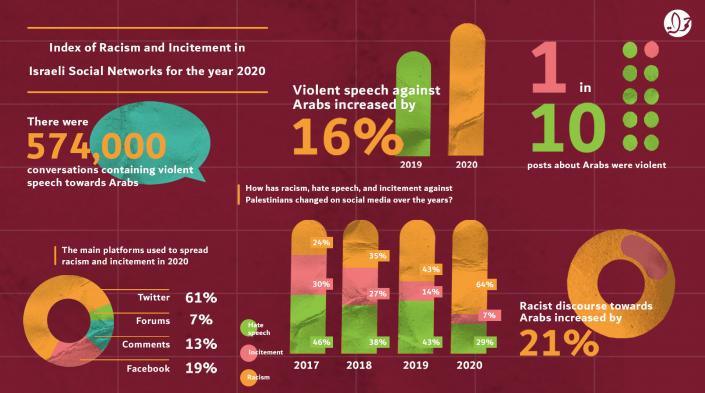 This piece was originally published by APC member organisation 7amleh.

The results this year showed that, due to the coronavirus pandemic, racist discourse towards Palestinians and Arabs increased by 21%, with hate speech constituting 29% and incitement 7% of these posts. The most prominent platform used to spread racism and incitement during the previous year was Twitter with 61% of all violent posts. This is an increase by more than double compared to 2019. Facebook on the other hand fell to second place with a rate of 19%, which is a decrease of 20% compared to 2019. This research was conducted through Vigo from "Yifat Group".

The Index of Racism and Incitement in Israeli Social Networks is an annual report issued by 7amleh, which monitors the intersection of the use of racist and violent speech against Arabs and Palestinians throughout the year.