Peru's farmers lack information: Why are telecentres being underused? 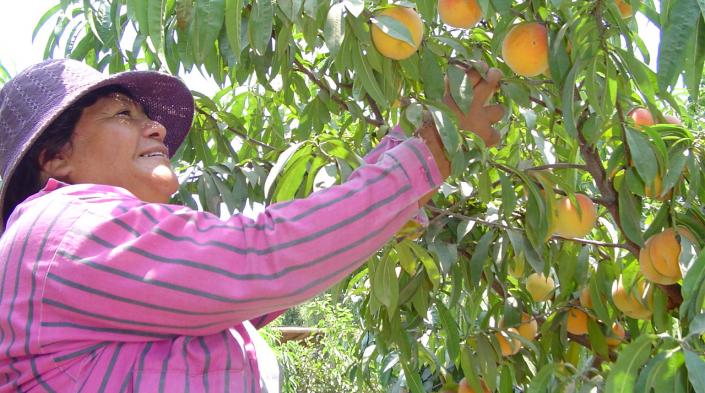 Susana* is 39 years old. She farms a patch of land in the Huaral Valley – a semi-arid desert region 100 kilometres from the Peruvian capital Lima. On the advice of her brother-in-law and other farmers, she finances her farming operation through loans from wholesale dealers. These wholesalers provide farmers with seeds on credit, on the condition that they sell their crops back to the company at a fixed price. As a result Susana is looked into planting cotton – another option is corn but this would require extra human resources that she cannot afford. When she needs information about pest control, fertilisers or harvesting, she turns to businesses that sell farming supplies or again asks her brother-in-law.

Susana’s practices are typical of most smallholders in Peru both male and female when it comes to making decisions about their operations. Another cultivator Noemí explains that when more information is needed about pest control for example “my brother goes to the store where they sell seeds and asks the technicians there”. Most farmers depend on “relatives, friends and neighbours for information on marketing and production, while they tend to turn to the technicians at commercial businesses for advice on specialist matters,” says a report from CEPES, a social studies research group based in Lima.

As in other coastal valleys in Peru, farmers in the Huaral Valley depend on irrigation to raise crops. CEPES began working in Huaral with the goal of providing local farmers with relevant agricultural information through the internet and other new technologies. Working in conjunction with the local board of irrigators since 2001, CEPES has established a series of telecentres in different areas of the valley to facilitate the distribution of irrigation water and offer access to agricultural information.

While these telecentres face a whole range of daily challenges perhaps the greatest challenge concerns their financial sustainability. In theory, people like Susana could pay for and greatly benefit from the different services offered in the telecentres, such as access to computers and the internet, and above all, training. But fewer locals are using the telecentres than expected, and so the people at CEPES decided to find carry out an evaluation to find out why. They adopted the APC Gender Evaluation Methodology (GEM) because it was a research approach that incorporates an aspect that was overlooked when the project was first designed: the needs of women.

Telecentres are “for kids”

One of the conclusions of the GEM evaluation was that women in Huaral are reluctant to use computers and the internet.

Susana goes to the telecentre at her local irrigation commission twice a year to pay her irrigation service fees. No one has ever told her that she can use the computers there, and in any event, she thinks it would be difficult for her, since she barely has a primary school education. She knows that there are computer training courses for farmers, but they are all offered at facilities 10 kilometres away from where she lives and there are serious security issues with public transport system. And even if there were computer courses available in her area, she would send her children, because she herself is too busy working, she says. Susana has never used the internet.

The need to work specifically with older adults was another finding from the evaluation. Janet, the coordinator of the telecentre in Palpa, noted that many older people do not want to learn from “kids” (the telecentre trainers who are often in their twenties) and if they need a service offered through the telecentre, they generally turn to the coordinator for help. The older the telecentre users, the less they use the computers and the more they consult paper bulletin boards and other traditional means of providing information.

In the case of older women, they appeared genuinely afraid of trying out the new tools and seemed convinced that “they are not for them”. GEM facilitator Dafne Sabanes Plou explained that in this particular context “the fear has to do with their limited education and their primary roles as housewives.” Many women over forty have only completed primary school. However things are different with younger women in their twenties and thirties. Dafne observed in Peru that younger women are likely to work in the fields together with their husbands. “Most of younger women have gone to school and they might also become interested in the development of new crops or using new machinery in the fields, getting information by cell phone or from the internet,” she said.

The GEM evaluation also revealed that many potential users, both women and men, are not aware of the existence of the telecentres and the possibilities they offer in terms of agricultural information. Most believe that facilities like these are “decorative” or geared solely to children and adolescents.

“Computers are for secretaries”

This situation is exacerbated by the fact that telecentres are neither valued nor supported sufficiently by the local irrigation organisations. Management of the telecentres is seen as “secretarial work” and coordinators hired have been women. Unfortunately the evaluation found that in some cases neither the coordinators nor the organisations understand the usefulness of the internet and telecentres or recognise their potential. As a consequence telecentre coordinators generally lack motivation and skills.

Some women have obtained concrete benefits by using the telecentres and the agricultural information that can be accessed through them. One example is Janet who has secretarial training and hopes that one day her local irrigation commission will have its own website. Thanks to the internet access provided by the telecentre, she has begun to raise avocadoes in her garden, and has passed on the knowledge she has gleaned to her husband. While she does not want to devote her life to this activity, it is a way of bringing in extra income that will one day help her to achieve her dream of opening up a bookstore. For her part Ysabel after working as the coordinator of a telecentre went on to work at a corn-marketing company. She says that she has been able to apply her experience at the telecentre to her new job, particularly when it comes to dealing with farmers. The company she works for is now the third largest of its kind in Huaral.

The results of the evaluation were shared with the board of irrigators and telecentre operators. The majority of landowners and members of the irrigation board are men and only women who are “heads of households” play an active role. Attitudes which undervalue women can be very entrenched in communities and change does not happen overnight. In Huaral, the application of GEM led the practically all-male board to reflect for the first time ever on the different needs of men and women. Now the board has been re-elected and CEPES is building a new relationship with them. “The evaluation results are out there and people from the communities know that change can happen,” concluded the evaluation team.

Women over 35: Too old for technology?

*The people in this article appear by first name only which is how they were cited in the CEPES GEM report.