Papuan Voices: A video for change initiative enabling Papuans to tell their stories to the world

Home / News / Papuan Voices: A video for change initiative enabling Papuans to tell their stories to the world 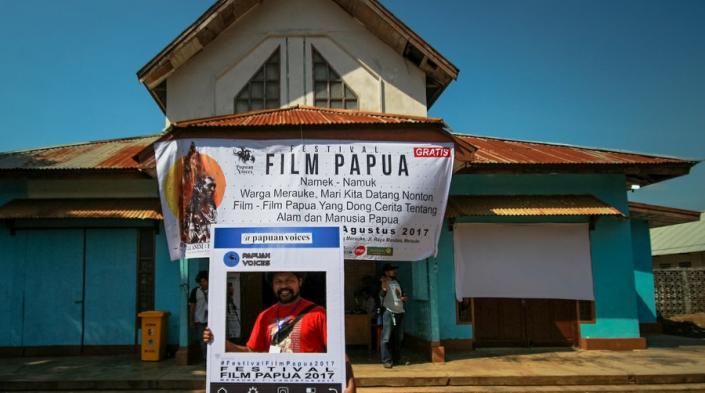 Papuan Voices is a video for change initiative enabling Papuan activists and citizen journalists to tell their stories to the world.

Papua (West Papua and Papua provinces of Indonesia) is one of Indonesia's least developed and least known regions. Since its controversial integration into Indonesia in 1969, Papuans have suffered discrimination in favour of Indonesian migrants and have been largely excluded from the wealth their land generates. A wide range of issues beset the region including human rights abuses, trans-migration, corruption, forest destruction, unemployment, and much more. Conflicts with Indonesian authorities are ongoing, poverty is widespread, and many Papuans demand independence or autonomy.

Papuan Voices aims to highlight the stories behind the conflict. Starting in 2011 as an EngageMedia project, Papuan Voices is now an independent non-profit hosting the annual Papua Film Festival, and coordinating regular video production and distribution of the provinces' unheard stories.

Since 2011 Papuan Voices has trained more than 80 filmmakers in Merauke, Jayapura, Wamena, Keerom and Sorong. More than 100 films, and two DVDs, have been produced. These videos have screened in more than 50 locations including Malaysia's Freedom Film Festival, Australia's Parliament House, Harvard University, in villages across Papua, and at the South to South Film Festival in Indonesia, where the film Love Letter to the Soldier won the award for best documentary.

In August 2017 the Papua Film Festival was held in Merauke, Papua; the first independent film festival ever held in Papua. Almost 30 films were entered, 50 people participated in pre-festival production workshops, 10 films were produced through youth-focused workshops, and more than 700 people attended.

APC will be featuring two videos per week to support EngageMedia and the Papuan Voices Community to amplify and bring forward the provinces' unheard stories.

The first video of this week: Papuan Students Demand Safety in Yogyakarta

On 4 October 2018, students from West Papua rallied to the office of the governor’s in Yogyakarta, Indonesia demanding an investigation and justice for the death of students Jessica Elisabeth in 2010 and Phaulus Petege in 2014, as well as the act of violence towards Yaved Adil in 2015.

The second video of this week: Sights and Sounds of the Second Papuan Film Festival 2018

This film by Ronny Berotabui provides visualisation of what happened during the Festival Film Papua II (2nd Papuan Film Festival) in Jayapura, 7-9 August 2018. Around 400 hundred people attended the opening session and some 300 people visited each of the following days.