New Canadian anti-terrorism law: The beginning of the end of the right to privacy?

Home / News / New Canadian anti-terrorism law: The beginning of the end of the right to privacy? 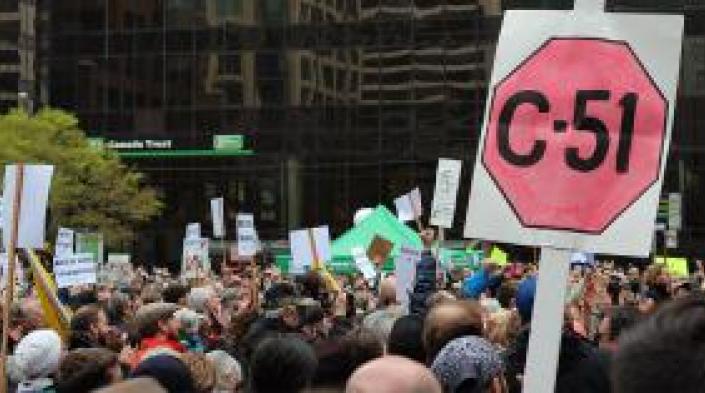 Protest against Bill C-51 in Ottawa. (Source: OpenMedia)On 6 May 2015, the anti-terrorism Bill C-51 was passed by the Canadian Parliament. Launched after the attacks of October 2014 that cost the lives of four people (the attackers and two military personnel), the law grants additional powers to the Canadian spy agency, including conducting disruptive actions. It also criminalises the “encouragement” of terrorism and facilitates the sharing of information across government departments and agencies. For some observers, this new law is “a version of the US Patriot Act on steroids” and implements an approach of “total information awareness” which has a profound impact on Canadians’ rights to privacy.

Extending the powers of the Canadian spy agency

Bill C-51 has attracted much criticism for extending the powers of the Canadian Security Intelligence Service (CSIS) – Canada’s spy agency. CSIS has no judicial or legislative oversight. Previously, the power of this organisation was limited to the collection and analysis of information, but under C-51, CSIS can take all measures “just and appropriate to the circumstances” to reduce threats to the security of Canada. The organisation can now undertake disruptive actions, even illegal ones, as long as these actions do not include sexual assault, do not cause either injury or death, and do not deliberately obstruct the course of justice. The absence of clear limits on CSIS’s new capacities was also criticised. For instance, the possibility was raised that the new anti-terrorism law could open the door to secret detention, as was practised in the United States after 11 September 2001.

CSIS’s disrupting capacity was the subject of strong criticism, especially from civil society in Quebec. Indeed, it must be emphasised that CSIS was created in the 1970s to compensate for the abuses of the Royal Canadian Mounted Police (RCMP), which had committed many illegal acts (burglary, arson, etc.) to counter nationalist and separatist groups in the province of Quebec. The power of CSIS was therefore established as separate from the police and was limited to gathering information. The fact that the new law collapses the boundaries between information gathering and policing is viewed as a “flashback” by some observers.

The new anti-terrorism law also significantly facilitates the sharing of information between various organisations and departments. For instance, the law now allows the Communications Security Establishment (CSE, the Canadian equivalent of the NSA) to share its collected data with CSIS or Canadian police forces. Overall, Bill C-51 also “allows authorities to share information about any person, for any purpose”, in accordance with the law. But as many analysts have pointed out, what is in accordance with the law is relatively vague in the context of digital communications. In an article on communications surveillance in Canada published in the 2014 edition of APC’s Global Information Society Watch (GISWatch) report, my colleague and I highlighted the legal confusion around collecting metadata, the “data about data” that can tell a lot about the behaviour of citizens. While it is not legal to share the content of a telephone conversation between governmental departments and organisations, the legality of sharing other information concerning this conversation (time, duration, source, destination) is not clear.

This aspect of the law is perhaps the most worrying from the point of view of surveillance. In the first study of Bill C-51, Professors Kent Roach (University of Toronto) and Craig Forcese (University of Ottawa) reported the development of an approach of “total information awareness”. In an opinion piece published in February, these researchers also characterised the bill as a step toward the end of the right to privacy in Canada.

Social movements as targets of the law ?

Another controversial aspect concerns the activities covered by the law. The project initially specified that “lawful” activities like protests or demonstrations were not covered by the law. However, several criticisms were raised about the ambiguity of this “lawfulness” reference. For example, it could be that indigenous people blocking a road for several hours to demonstrate for their rights are not protected by provisions in the act. An illegal strike, even circumscribed and peaceful, might be considered an unlawful activity and thus covered by the law. It is not clear who decides if citizens attending a demonstration that contravenes municipal law should be considered to be committing a terrorist activity. Faced with such criticism, the government removed the controversial reference to the “lawfulness” of an activity, which has led some media reports to conclude that demonstrators were no longer a target of the law. It still, however, raises questions regarding the scope of the anti-terrorism act.

The Conservative government, in power since 2006, has the habit of being very opaque in the management of its affairs. As usual, the government has largely ignored the objections and set aside debates on the bill, even though hundreds of thousands of people signed a petition to stop it from being passed. Four former prime ministers have also criticised the bill, in particular requesting that the monitoring of surveillance agencies be strengthened. However, taking advantage of the climate of fear created after the October 2014 attacks in order to push its legislation through, the government also imposed a gag order to accelerate the adoption of the bill. The adoption of Bill C-51 can therefore be considered an act of security authoritarianism that comes at the expense of democracy and the human right to privacy.

Stéphane Couture is a communication researcher at McGill University. He is the co-author of the 2014 GISWatch report on Canada.