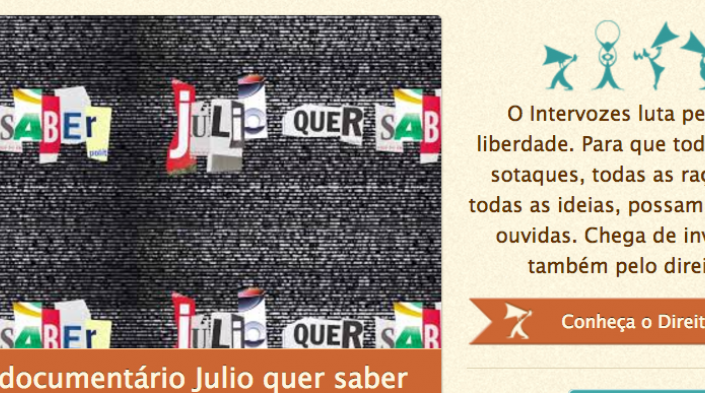 “Intervozes fights for democracy and freedom, so that everyone from all religions, races and backgrounds can be respected, seen and heard. Enough of invisibility. Join the fight for the right to communicate!”

With this statement of principles, Brazilian NGO Intervozes welcomes visitors to its work, which focuses on raising awareness among the Brazilian public of the freedom of expression as a right for all. It also fights for the right to information and for diversity and plurality in the communications field through varied strategies, enabling citizens and citizen-led organisations to constructively engage in the struggle for media reform. APCNews talked to team members Veridiana Alimonti and Bia Barbosa shortly after Intervozes became an APC member.

APCNews: You work with groups that are misrepresented or even harmed by the media. Can you tell us more about these groups and how you work with them?

Intervozes: We work for improving representation in the media as a whole, promoting regulations and policies that can overcome the impressive concentration in Brazilian mass media. The enforcement of the right to communicate depends on true media diversity and plurality. In order to achieve that, Intervozes combines advocacy and monitoring activities with awareness raising, political coordination with social movements, and content production. In our opinion, a public communications system, as we see in the European tradition, with social participation in programming and proper funding, is one of the keys for a representative and diverse media. This is why the strengthening of the public system, seriously under attack in Brazil nowadays, is among the main pillars of our work.

Regarding the harmful effects of an undemocratic media on misrepresentation, Intervozes is part of the Women and Media Network, which deals with gender offences committed by the media, either denouncing them to the general public or reporting them to the competent authorities. The Network also plays the role of promoting public debate around the misrepresentation of women in the media, where they are depicted as products, inferior beings, or targets of an often naturalised violence.

This is part of a broader problem related to human rights violations within the media system, which also affect other vulnerable groups. In 2016 Intervozes launched a still ongoing campaign called Media Without Violations aimed at exposing and denouncing human rights violations, particularly on TV shows dedicated to covering crimes, following the police's daily work. These shows humiliate the suspects and their families, incurring in numerous infractions with regard to human rights and the rule of law. The campaign website receives complaints in order to build a ranking of such violations. Intervozes also fights for respect for the rights of children and youth in TV programming, supporting administrative and judicial measures to ensure that abusive content is not broadcast at inappropriate hours.

APCNews: You refer to critical reading as a vital skill in a democracy. How do you cultivate this?

Intervozes: We frequently release media coverage analysis on our blog in a progressive Brazilian magazine, especially at important moments in our political scenario (for example, the escalation of events that led to the coup against President Dilma Rousseff or the media coverage during days of national mobilisation in opposition to austerity reforms). We seek to demonstrate how imbalanced the coverage is, omitting substantial information, listening to only one side or providing it much more time compared to the other side, and stating the media company's position as a fact instead of clarifying its nature as editorial opinion. In addition, we have published two more detailed reports dedicated to assessing and providing evidence of media bias. The first one was completed in 2011 and concerns the news coverage of a Parliamentary Commission that investigated the Brazilian Movement of Landless Rural Workers (MST). The second one was published in 2014 and focuses on the media coverage during the massive protests that occurred in Brazil in June 2013.

APCNews: You say that “the internet not likely to be an effective way to introduce a plurality of voices in the short term” – why?

Intervozes: The internet undoubtedly has the capacity to leverage plurality and diversity in communications and has already given many important demonstrations of how it can enhance the exercise of human rights. However, it is crucial to acknowledge that the problems and challenges related to the traditional mass media did not disappear with its advent. Impressive market concentration and redesigned models of information gatekeeping increasingly consolidate new powerful intermediaries with the ability to determine how this information will be shared and accessed on a global basis, often reproducing “bubble” dynamics and reinforcing cultural bias (applying North American values as “universal” standards). Moreover, the digital divide, reflected in the imbalance in access to and use and development of ICTs in different countries and populations, has led to a network with mainly English content and with other inequalities in relation to gender, religion and ethnicity, among others.

APCNews: What is the most challenging part of your work? What do you struggle or find obstacles with the most?

Intervozes: We would say that the most challenging part of our work can be summed up in three elements regarding the achievement of our main goal, which is promoting and guaranteeing the right to communicate. Firstly, there is the concerted resistance of the media and communication market, a very powerful one, especially when it comes to shaping public opinion on what should be prioritised and what should be rejected. This influence takes us to the second element, which is the immobilisation of governments in the face of the significant lack of media diversity and plurality in Brazil – a mix of effective pressure carried out by the communication companies and an absence of a political view on the part of these governments about the importance of the issue to our democracy. Lastly, the third element is related to the lack of awareness among the general population about their right to communicate, often reproducing the media companies' discourse that regulation or communication policies would harm freedom of expression instead of enhancing it. All these three elements are connected and the task of confronting and overcoming them, to bring about a broader and more diverse concept of communication, is exactly what our work is about.

APCNews: Tell us some success stories, of how your work has impacted your community

Intervozes: We would like to share three stories that are good examples of how we work on communication issues.

The first is the approval of the Brazilian Civil Rights Framework for the Internet (Marco Civil). Intervozes joined the coalition of organisations that was deeply involved in monitoring and contributing to the Marco Civil proceedings in the Brazilian National Congress. Especially during 2013 and 2014, we played a strategic role, carrying out a wide range of activities. Since we were one of the few civil society organisations with a permanent representative in Brasilia [the national capital], our contribution in building the bridge between what happened daily in Congress and the mobilisation initiatives of the NGO coalition was an important part of the series of factors that led to the approval of the Marco Civil in 2014.

The second example is from 2006. In partnership with the Federal Prosecutor's Office and other organisations, Intervozes filed a lawsuit against a TV channel, and we were granted our demand for counter-programming for violation of human rights. Thereafter, we coordinated the development and production of 30 TV programmes that broadcast more than 400 videos by independent producers. This series of TV programmes was called “Rights of Reply”.

Finally, in 2009, we were involved in the first (and so far only) National Conference on Communication, which involved more than 30,000 people across the country who participated to discuss communication policies in Brazil. It was a public consultation process organised by the federal government and co-coordinated by a number of civil society organisations. Intervozes was one of them. Our task was to mobilise popular movements and activists in states and regions where we operate to participate in the process; to develop public policy proposals to be discussed and voted on; to produce awareness-raising materials and information on the communications sector for different levels of discussion; to negotiate proposals for public policies with the public authorities at all levels; and to discuss these proposals with the business sector. In this process, Intervozes managed to elect one of the largest delegations of civil society to the national stage of the Conference, and had most of its proposals approved by the delegates. After the process, the movement for media democratisation grew significantly in the country.

APCNews: Why did you join the APC network? What do you think you can contribute as a member, and what do you expect from APC?

Intervozes: Intervozes has been working on internet issues for almost 10 years now, always driven by the purpose of contributing to ICT policies aimed at the accomplishment of humans rights. We understand that this is an international battlefield and it is increasingly relevant for organisations to collaborate beyond the national level, considering that this is also how economic power acts. Joining the APC network is a way of doing this. APC has been a great reference for us for a long time, carrying out wonderful work based on the same premises that we value and seek to apply. As we are a collective of activists with national reach, we can contribute to the network by bringing a broader perspective on the challenges regarding internet issues in Brazil, from access to privacy to freedom of expression, as well as sharing what has been undertaken in the country by the Coalition on Rights on the Internet, which gathers 40 entities from this field. We also intend to link APC's regional and global initiatives to our work at the national level, building synergies and partnerships.