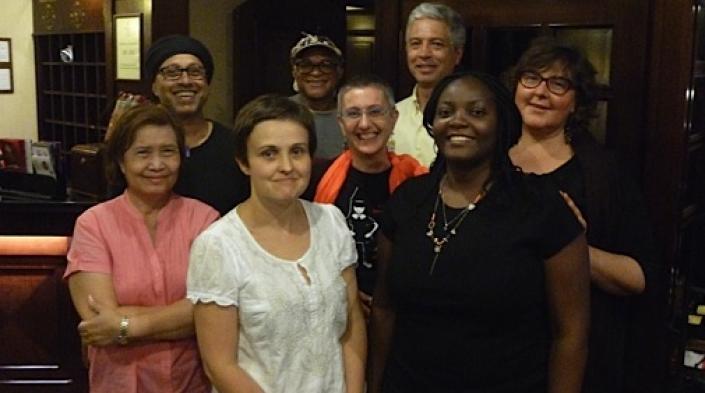 On 8 June during the APC Member Meeting in Barcelona, Spain, our organisational members elected a new board of directors for the next three years.

As a result of the elections, the composition of the new APC Board of Directors is as follows:

About our new board

APC is proud to have a board on which the majority of directors are women and based in the global South. We would also like to congratulate the elected members of the incoming APC Board of Directors and wish them a productive and outstanding governance period until 2016.

Julián Casasbuenas G. is a chemical engineer with more than 20 years of experience in environmental, information and communication technologies. He is the Director of Colnodo which provides internet services to Colombian development organisations. Colnodo is motivated by issues such as human rights, the environment, housing, and the betterment of women’s lives. With Colnodo Julián has promoted and democratised the use of ICTs and the internet in Colombia and has developed significant expertise in issues of rural access, telecentres and open source software.

Valentina Pellizzer is a feminist activist and the executive director of OneWorld – Platform for Southeast Europe Foundation (OWPSEE) based in Sarajevo, Bosnia. OWPSEE stems from the OneWorld Southeast Europe Initiative, a multilingual and multimedia portal for civil society. Valentina has experience in the coordination of relief and development programmes, including the distribution of humanitarian aid, the establishment of health services for women refugees, the supervision of micro-credit schemes, and the implementation of an integrated refugee return programme. A citizen of Italy with a degree in law, she has worked in the Western Balkans since 1994.

Liz Probert has worked for APC member GreenNet since 1998, initially on user support and web server administration, and more recently on web development projects. As an active member of the APC Women’s Rights Programme, she has contributed to technical installations and training at a number of UN conferences and international events supporting women and technology.

Osama Manzar is a convert to the world of social entrepreneurship with a mission to overcome the information barrier between India’s rural sector and so-called developed societies, through his work at the Digital Empowerment Foundation (DEF). He has worked at Computerworld as an assistant editor and as head of the Interactive Media Division of the Hindustan Times, and started a software company, 4Cplus, for media publishers. Osama founded DEF in 2003. He is a physics graduate with a post-graduate diploma in journalism.

Chim Manavy is the executive director, chairperson of the Executive Committee, and a founder of Open Institute in Cambodia. Through Open Institute Manavy’s hope is to promote gender equality and women’s empowerment. She is the founder of the Women Empowerment for Social Change programme that aims to promote gender equality and women’s rights. Manavy is also the editor of the women’s web portal and forum coordinator for online discussions. She also worked at the Ministry of Foreign Affairs and International Cooperation for more than 20 years.

John Dada, the volunteer CEO of Fantsuam Foundation, was born in Jos, Nigeria and obtained a PhD from Ahmadu Bello University, working as a lecturer until 1994. Under his watch, Fantsuam Foundation has done groundbreaking work to grow Nigeria’s rural knowledge economy, which is having significant impact in Bayan Loco, Kafanchan and surrounding villages. John’s passion has been the development of a dynamic social protection service for the most vulnerable with support for food security, legal protection, economic empowerment, social welfare and education.

Lillian Nalwoga is the president of the ISOC Uganda Chapter and works with the Collaboration on International ICT Policy in East and Southern Africa (CIPESA) as a policy associate. She holds a Bachelor’s of Development Studies (Makerere University, Kampala) with a Master’s Degree in Management (Uganda Management Institute, Kampala) as well as advanced training in internet studies.

Anriette Esterhuysen is the executive director of APC, an international network of organisations working with information and communications technologies to support social justice and development. Prior to joining APC, Anriette was executive director of South African APC member SANGONeT, an internet service provider and training institution for civil society, labour and community organisations. From 1987 to 1992, when she joined SANGONeT, she did information and communication work in development and human rights organisations in South Africa and Zimbabwe. During this period, and while she was at SANGONeT, Anriette, with many others, helped establish email and internet connectivity in Southern Africa.

The APC Board of Directors for the previous period, 2011-2013, was comprised of:

APC’s executive director, deputy executive director, staff, and organisational and individual members wish to deeply thank the outgoing members of the board and to acknowledge their efforts and excellent contributions towards strengthening the network during the period 2011-2014.

The board makes strategic decisions about APC membership and key partnerships, and it plays a central role in defining APC’s strategic priorities. The APC board often deals with challenging institutional issues and these require strong commitment and willingness to sacrifice time for the network.