Muavin, a community-based solution for fighting online harassment in Pakistan 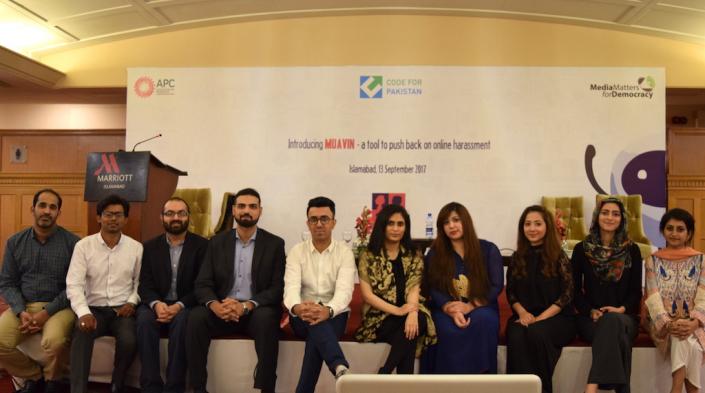 Women journalists and human rights defenders face increasing abuse and harassment while using the internet, an issue particularly pressing in countries like Pakistan. Among the latest resources to respond to online attacks, a new platform has been launched by APC member Media Matters for Democracy (MMfD). Muavin's beta version was presented in Islamabad on 13 September. This tool aims to help women and other internet users to explore new ways of fighting online abuse.

Muavin, an open source tool created by MMfD’s partner Code for Pakistan (CfP) and supported by APC, allows users to create and alert groups of allies on their Facebook and Twitter networks when they face harassment or abuse in online public spaces. Allies alerted can then add their voices in support. The tool also includes community spaces to share and discuss digital experiences, particularly in context of online abuse and harassment.

The launch event, held in Islamabad, was attended by Ambassador of Sweden to Pakistan Ingrid Johansson, who gave the keynote speech, stressing the need for solutions that enable women and marginalized groups to add their voices and enjoy the full potential of technology. A panel discussion followed, focusing on the trend of online harassment of women and the need for women to find allies within their networks and speak publicily in support of each other.

“We hope that Muavin will help women and other users explore a different way of fighting against online abuse,” said MMfD’s Executive Director Asad Baig. “Muavin essentially aims to create a community that is well aware of the issue of online harassment and is able to band together to challenge online trolls and abusers,” he added.

The app’s beta version is available on the Google Play Store, an online distribution platform for smartphone applications.

In July, CfP and MMfD presented the app at a workshop during the Asia Pacific Regional Internet Governance Forum 2017 Bangkok. Watch this video to hear what panelists and attendees had to say about Muavin.