Meet APC’s board of directors and what concerns them today 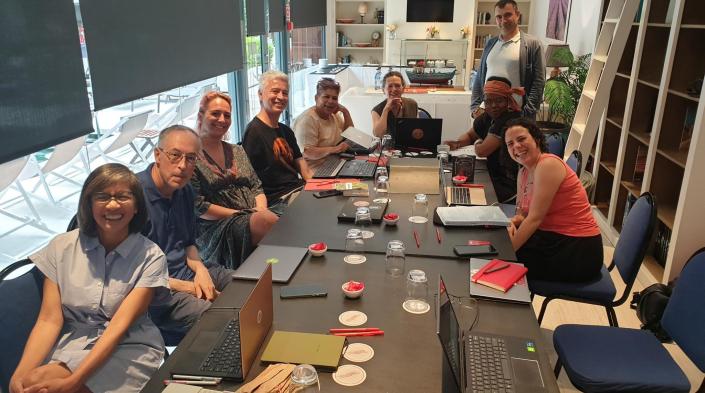 APC's board of directors is its primary governing body that makes policy and management decisions. It works with APC’s executive director and staff to implement the strategic priorities decided by network members.

APC's governance structure includes a board of directors as well as a council, both comprising network members. All the organisation’s powers and activities are exercised and managed by the board, with certain powers reserved for the council. The board is formed every three years when the APC member network council elects between four and eight directors from among its members (excluding APC’s executive director, who is automatically appointed). The board usually appoints a chair, vice chair, secretary and treasurer.

To the maximum extent possible, APC ensures that its board directors represent a diverse set of experiences, backgrounds and characteristics. The board is composed to try to ensure a wide range of views, skills, experiences and professional and sector knowledge necessary to meet the organisation’s strategic objectives. APC also emphasises regional diversity and gender balance, whenever possible, as well as continuity and renewal.

"One of the things I’ve really appreciated about APC is the composition of the board – there is a diversity in gender, in regional representation, in age. The discussions at the board level, which then are a picture of what happens at the member level, are that people are listening to different perspectives. That builds such a richness into how APC is able to understand where the members are and also respond to them."
–Sol Luca de Tena, APC Board Treasurer

The current board was elected in an online member meeting in October 2020 and consists of the following directors:

Here are introductions to our current board of directors. All video interviews were conducted in Sitges by APC's media outreach lead, Leila Nachawati Rego.

After two difficult years when the APC network came closer than ever to face a global pandemic with a fresh digital presence, and which entailed that APC’s 30th anniversary celebrations be held online, the board was finally able to meet in person in Sitges, Spain, in June 2022.

Our board members shared insights with us about some of the most pressing issues they are facing in their respective contexts and local realities. There were some common threads of concerns, of course, like gender, community access and environmental sustainability, but in the videos below they emphasise how their particular contexts affect these issues, such as the circular economy, digital misinformation, historical web memory, diversity challenges of last-mile connectivity, etc. We are delighted to bring you these highlights from our distinguished board.

"APC’s emphasis as a network [is] on really bringing a whole bunch of voices into the mix, so it’s not only technologists or male researchers and academics who are talking about building the internet in future, but really a huge variety and diversity of women, trans, non binary, all of us trying to bring our lived experiences to the internet and shaping it from there."
–Bishakha Datta, APC board vice chair

Chair of APC's executive board of directors

A PhD in telecommunications, Navarro co-founded Pangea, a Barcelona-based non-profit organisation dedicated to promoting the strategic use of communication networks and ICTs for development and social justice, in 1993. He is now Pangea's vice-president and a member of its advisory board. Navarro is also co-founder of eReuse.org, a circular economy initiative for the reuse and traceability of digital devices, and an associate professor at Universitat Politècnica de Catalunya (UPC).

Vice chair of APC's executive board of directors

Datta is a filmmaker, activist and former journalist. She is the co-founder and executive director of Mumbai-based Point of View, a non-profit organisation working in the area of gender, sexuality and women's rights. She also serves on the board of non-profit organisations including Creating Resources for Empowerment in Action (CREA) and the Wikimedia Foundation (2010-2014).

Secretary of APC's executive board of directors

Casasbuenas is a member of the Internet Society (ISOC) and was the Internet Governance Forum (IGF) Ambassador for the 2007 and 2009 IGFs. A former chair of APC’s executive board, he is the director of Colnodo, a Colombian non-profit organisation established in 1993 with the goal of facilitating communications and exchange of information and experiences among organisations at the local, national and international level. He was also a member of the IGF Multistakeholder Advisory Group (MAG) from 2016 to 2018.

Treasurer of APC's executive board of directors

An electromechanical engineer, Siyam is president and co-founder of Cameroon-based PROTEGE QV, a non-governmental organisation that since 1995 has undertaken initiatives to promote rural development, protect the environment and improve the well-being of communities. Siyam is an expert in decentralisation and local development who has participated in or led development projects and held several positions of responsibility in the Cameroonian administration and at the Special Fund for Equipment and Intermunicipal Intervention (FEICOM).

A former chief editor of current affairs at Bulgaria’s Nova TV, Antonov is co-founder and executive editor of BlueLink, a virtual network offering a variety of internet-based services for anyone interested in issues related to the environment, natural resources and sustainable development in Bulgaria. Among other things, his research focuses on the engagement of social movements with journalists and business, and he has led training courses for journalists and e-networking activists across Eastern Europe, Turkey and NIS. He has returned for a second stint on APC’s board after 20 years.

A journalist with a master's degree in social communication, Castro is director of institutional development at Instituto Nupef, a Brazilian non-profit organisation whose mission is to generate the conditions for the exercise of digital citizenship, working in the defence of democracy, access to knowledge, freedom of expression, privacy and cultural diversity, among other fundamental rights. She has worked for organisations such as the Wikimedia Foundation, Instituto Overmundo, Fundação Getúlio Vargas, British Council and e-Government of the City of São Paulo. She is also co-founder of and a volunteer at another APC member, Intervozes.

Ramilo has worked as a gender and ICT consultant for the Canadian International Development Agency (CIDA), the International Development Research Centre (IDRC), the World Bank, UNIFEM, UNESCAP and the United Nations Division for the Advancement of Women. She first joined APC in 2000 and is an experienced manager, evaluator, resource person and speaker on gender and ICTs. She was manager of APC’s women’s programme from 2005 to 2012 and became the organisation’s executive director in 2017. She is also the board chair of the Center for Migrant Advocacy in the Philippines.

Antonov concluded to APC’s member council about the latest board meeting:

"As a board member returning 20 years later, let me share my fascination with how APC has evolved into a mature and well-established organisation, while preserving the best of its old spirit and human contact. This is clearly the result of long years of good management and continuity, based on a shared value system between staff, management and members. Well done!"