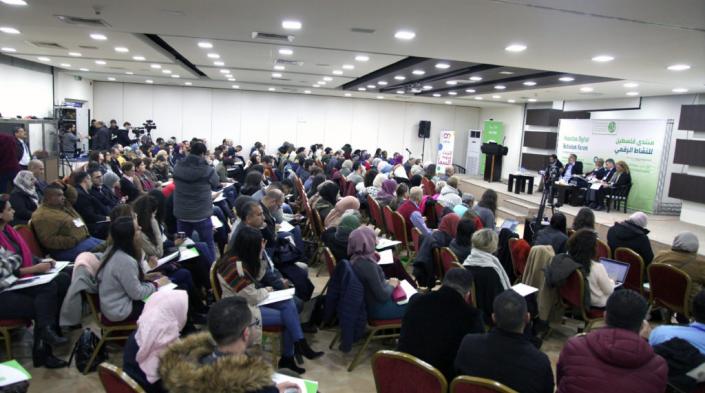 Hundreds of students, activists and human rights defenders attended the Forum, hosted by 7amleh – the Arab Center for Social Media Advancement, a non-profit organisation aimed at enabling Palestinian and Arab civil society to effectively utilise the tools of digital advocacy. 7amleh has been a member of the Association for Progressive Communications (APC) network since June 2017.

The event, which gathered representatives from social media corporations such as Facebook and Google, as well as leading human rights organisations such as Amnesty International, Human Rights Watch and APC and local experts from Birzeit University, Al-Haq, Addameer and Build Palestine, focused on issues ranging from Facebook’s content moderation in conflict areas to the impact of the Palestinian Cybercrime Law on Palestinian rights.

In the words of Anriette Esterhuysen, APC's director of global policy and strategy, "The challenges faced by Palestinian communication activists are not simple. They face constraints at the access and infrastructure level, as they are basically dependent on Israeli infrastructure and speeds are often slow."

The constraints Palestinians face are made evident by the fact that the majority of people who are dependent on mobile data still don't have 3G, and content is controlled by three government entities – Israel, the Palestinian Authority (PA) and Hamas – as well as by content platforms.

"Discussion was open – often very vigorous – with activists, users, government and businesses stating their views, constraints and approaches," Esterhuysen said. "This event is both a space for initiating collaborative action, and confronting serious challenges – such as targeted content filtering that specifically affects Palestinian rights groups. By organising this forum annually, 7amleh is really making a difference over time. It means participants can look back and reflect on what has  changed in the last year, as well as set goals for the future."

More on the event and the key discussion points here.