Lived experience and connection: Networks of knowledge produced by Black and rural women through the Territórios Livres, Tecnologias Livres project

In the memories of Maryellen Crisóstomo, a member of the quilombola community and journalist for the Articulação Nacional das Comunidades Negras, Rurais Quilombolas (Conaq), the image of her mother placing the batteries of the radio on the roof to recharge with sunlight is imperative when the subject is technology. “By the way, this one was hung high away from the children to succumb to the only possible contact with the outside world,” says Maryellen about the importance of the radio for communication in her community, Baião territory in Almas/TO. “I remember waking up in the early hours of the morning listening to the radio on with country music and reading letters to family members somewhere in Brazil, where the sender always wished that the news would find them alive and well,” she remembers.

As a crossroad, Aline Carneiro, an administrative coordinator for the Movimento da Mulher Trabalhadora Rural do Nordeste (MMTR-NE) defines the use of technologies in her relationship with education and the social movement. Three milestones that changed the course of her life forever: moving from the city to the rural area of the municipality of Conde/PB, after her grandfather passed away; the technical course in Agriculture; and, in 2010, the meeting with MMTR-NE through a friend.

In the rural area she experienced other living contexts such as the distance between houses, the lack of electricity, the mud house, or having to cross the river to go to school were challenges overcome through various experiences. In the Agriculture course, in the technical school, Aline was able to learn more about the world, people, and technologies. As for the MMTR-NE, she points out, “I lost the fear of speaking out, so I broke free from the submissive mentality that I was taught from an early age, and I recognized my identities and origins”.

At the other end of the Northeast region, Tâmara Terso, a member of Intervozes, turned on a computer for the first time in the computer and typing course in Itamaraju/BA. In 2004, these two types of knowledge, analog and digital, were for her, until then unknown, already considered by many to be incompatible. Years later, in connection with other women on the Territórios Livres, Tecnologias Livres project, the journalist says that she “relived the richness of that process that made different technologies coexist, without a logic substituting and erasing”.

For Naiara Santana, born and raised in the settlement Vitória da União/SE, the territory has always been a place of struggles and resistance. The communications coordinator for the Movimento da Mulher Trabalhadora Rural do Nordeste (MMTR-NE) tells us that she grew up following the difficulties of the community, where only one bus passed by every day. The notice would arrive months late and her mother tells, to this day, that her brother-in-law died and they found out three months later.

The first time she heard about types of technologies was in 2006, when she got her first cell phone and computer. However, she makes a counterpoint of these episodes, reflecting that “in fact everything is technology, whether in knowledge or organizational techniques.”

These are powerful ideas to tell stories. Our stories! Four black women who met in the coordination of the Territórios Livres, Tecnologias Livres project, aiming at mapping the uses and conceptions of Internet, Communication and Information Technologies, and Social and Environmental Justice with quilombola and rural communities of the Brazilian Northeast region, between 2020 and 2021.

The challenges faced by these communities due to the constraints imposed by the COVID-19 pandemic, made our meeting even more urgent. Since the beginning of the health crisis, for example, the quilombola communities have had difficulties in receiving information about the prevention of the SAR-CoV-2 virus and accessing rights such as emergency aid .

The lack of government initiatives to ensure access to the Internet and to Communication and Information Technologies (CITs) in rural areas is resulting from the structural racism, which contributes for maintaining the inequality systems in the country. In this sense, humanizing and territorializing the data to understand the impacts of technologies on the promotion of social and socio-environmental justice were essential for the TLTL project. 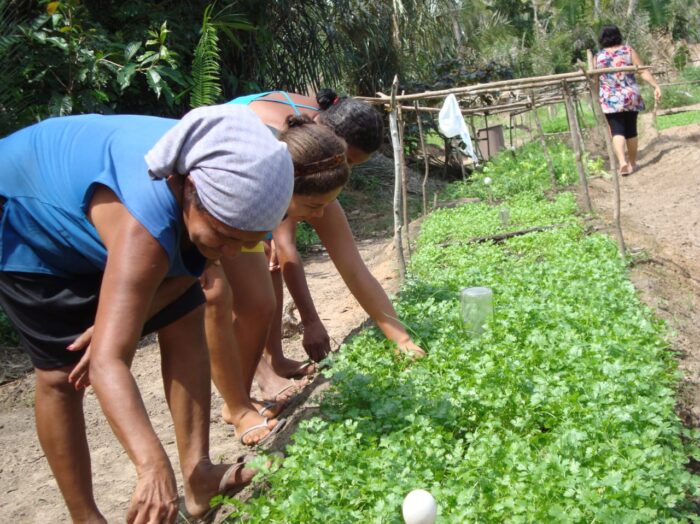 Historically, women are responsible for holding the knowledge for the production and reproduction of life. For this reason, they were the main protagonists in all stages of the mapping. The experiences lived in the territories, such as the reports that introduced this text, guided our epistemological references, as well as the dialogues and connections through community initiatives were the methodological basis for building our “xirê” - components of a black feminist epistemology according to Patricia Hill Collins, an African-American sociologist.

Black, indigenous, quilombola community, Afro-Brazilian religion, rural and urban women gathered their knowledge about economy, education, environment, politics, communication and technologies to strengthen the struggles of the present and plan better days in the future. In the mysticisms and the movement we face attacks that try to disconnect us from our memories and rights online or offline.

Getting the project to 274 families from 33 communities was not easy. That is why the dynamic “one goes up and pulls the other” organized the work of the researcher-activists, five women and one man, quilombola community leaders and rural workers, who coordinated the research in the nine states of the Northeast region and encouraged its multiplication process in the territories.

At this time we understand a little more the words of Mãe Beth de Oxum when she tells us that technology is a drum and that “Ogum”, the “orixá” who manipulates iron, teaches us through the “Ifás” to share fish with his tools. In this same sense, we leave messages and share resources to include more households in the exchange of knowledge, powerful tools to understand the scenario of inequalities exposed in the systematization of the data below.

The data from the mapping are in line with Maryellen’s experience, who at the age of 14 earned her first remuneration, a fee in her school’s dance group (Jiquitaia de Danças Típicas de Almas group) after a trip to France, with which she bought her family’s first TV and cell phone, as well as a camera at Hermes magazine.

Women with their experiences, knowledge and technologies of care have a greater attention to the quality of life around them. And this attention is directly related to access to information. According to the survey, 21% of the households that affirmed receiving information about prevention against the coronavirus were composed of a majority of men and 28% of a majority of women.

It is worth pointing out that there is a tendency, in rural areas, of households being supported exclusively by women who carry out a lot of work, from work on their fields, handicrafts, to household chores on third parties’ properties.

In dialogue with the women in the territories it is noticeable that there is no fixed income every month. Family income varies a lot and can be affected by climate conditions, such as lack of rain. Therefore, public policies that provide greater independence for women to decide the family’s priorities in relation to income, such as the “Bolsa Família” Allowance, need to serve as an example of income distribution actions that foster access to the Internet and CITs.

Fear we have, but we don’t use!

Women are prominent in leading the cyclicality that assures lives in the territory. This protagonism is accompanied by community-based work that involves both genders, as pointed out by the mapping when addressing the ways of facing the difficulties of access to the Internet and CITs. Households composed of a majority of men and women participated, at the same level, in the community work, reinforcing the characteristics of rural communities and traditional peoples and communities, which recognize the creation of their identities and ways of life in the collective work. To strengthen these ways of life, the communities develop several strategies, such as ancestral technologies.

The historical knowledge of the elders in connection with the young ones to heal, care, feed, and protect through natural medicine, soil management, self-care, and preservation of native seeds, among other knowledge and practices that are found out as a source of alternatives to predatory capitalist development.

In this context, the MMTR-NE presents the “Escola de Educadoras Feministas”: ancestral and social technology of free access, reapplicable, easy to understand and that can be readapted for different contexts to enhance the knowledge of each woman. Its methodology is designed by rural women workers from the nine states of the Northeast region with the accumulation of internal and external experiences. These are dialogue rounds that strengthen the daily life, training, and knowledge about rights and equality between men and women in the communities.

“Free technology is having ancestry present, always!”, says the quilombola community writer Selma Dealdina. For her, the ideas of development and evolution of modernity exclude memories and stories that need to be activated as self-defense of bodies and territories violated by racism. As an anti-racism initiative in the territories, rural and quilombola community women also join to participate in spaces of political incidence, reporting the inequalities of access to the Internet during the pandemic, by participating in public hearings in the House of Representatives, and also as a representative of these movements in the Commission for Protection of the Users of Telecommunication Service (CDUST).

In line with Dealdina, “Mestra Cida”, from grupo de coco e ciranda de roda Desencosta da Parede, from the Caiana dos Crioulos/PB community, in front of the computer and live for many people, shows us the importance of activating the ancestral technologies through the game of rhymes, melodies, and integration of generations. By sharing the welcoming ceremony of Bianca and Beatriz, two teenagers initiated into the traditions of their community, she produces networks of knowledge and protection of their ways of life, while in the hope that digital connections can cooperate in strengthening these experiences.

The Territórios Livres, Tecnologias Livres project dared to bet on the use of online and offline territories as a way to claim rights and build solidarity networks. Communication strategies have always been powerful and necessary instruments in the hands of communities, whether rural or urban. And if today we are experiencing a more qualified dialogue about the right to communication, it is because there were people who dared to build new possibilities according to their identities, territories, and realities.