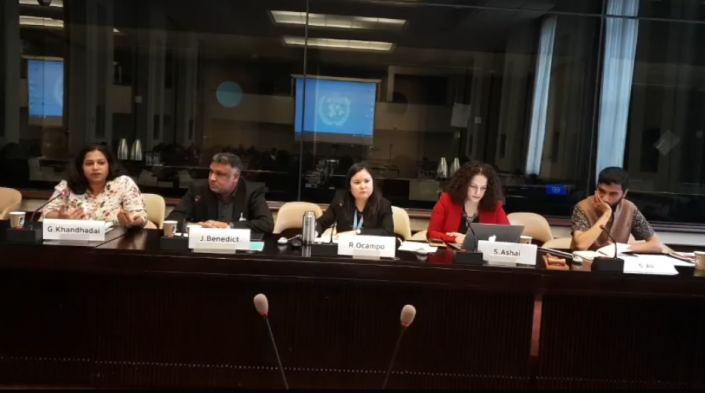 In India, a discriminatory citizenship law has sparked widespread protests, which have been met with arbitrary arrests, excessive force and violence by the authorities. In this context, human rights defenders and civil society activists are facing increasing levels of repression, laws are systematically used against critics, and there are ongoing restrictions on public gatherings and internet freedom. As the situation continues to deteriorate, the Association for Progressive Communications (APC) participated in a side event at the 43rd session of the Human Rights Council (HRC43) to look at actions needed to ensure an end to these human rights violations.

The session, titled “India: Constitutional and civic space crisis”, took place on 2 March in Geneva. APC’s Asia regional policy coordinator, Gayatri Khandhadai, gave an overview of human rights violations in the country and how they have reached this point.

“What India is witnessing today did not happen overnight, but it has been building up as a result of the systematic erosion of state institutions, along with coordinated hate campaigns and targeting of religious minorities, progressive voices and political activists, offline and online,” she stated, also stressing the role of media. “It is not only the attacks on the independence of media that must worry us. It is the active co-option and peddling of hate narratives that certain media groups engage in that has led us to where we are.”

Khandhadai also emphasised the organic nature of the demonstrations, evidenced by the fact that they were mostly led by women and youth. “What has been really interesting about these protests is that it has been unconventional forces that are leading them,” she explained. “It’s women, it’s young protesters, it’s first-time protesters, it’s students… beyond and across party affiliations. And this is what really troubles the state authorities.”

Speaker Sharib Ali of Quill Foundation, an autonomous institution engaging in research and advocacy in India, warned about the extent of hatred spreading in the country. “Hate is all across the nature of this country, and completely against anything that is valued, culture, sophistication, education – these are people who just want to make this place so dry, that nothing can exist except power,” he said. Referring to the separation of powers, he added: “One thing that the international community needs to consider is that it is not the case any more that our judiciary is independent and free.”

Participants in the session also focused on the importance of internet freedom, stressing the threats to fundamental rights posed by measures such as internet shutdowns. “These actions harm human rights, including blocking emergency services, and create a media vacuum, barring critical information from reaching the public,” said researcher Josef Benedict of CIVICUS, a global alliance dedicated to strengthening citizen action and civil society around the world. Benedict also sent a clear message to states: “Now what can states do? Push the Indian government to respect and protect the right to freedom of expression and to assembly and send a strong message to the police to express restraint when policing demonstration.”

Sehla Ashai of the Kashmir Law and Justice Project spoke about the increasing impunity in the region of Kashmir. “There is no judicial check on internet shutdowns and there’s no check on human rights violations perpetrated in Kashmir,” she stated. She also highlighted the fact that these violations are systematic, “happening every time the people of Kashmir have a modicum of freedom to express their political will. As long as their political will is not expressing a desire to be absorbed into India, they are violently repressed.”

About the Human Rights Council: APC participates at the UN Human Rights Council, an intergovernmental body responsible for strengthening the promotion and protection of human rights around the globe, to raise awareness and build support for internet rights. Our participation includes the Universal Periodic Review (UPR), a unique process coordinated by the HRC, involving a review of the human rights records of all UN member states.