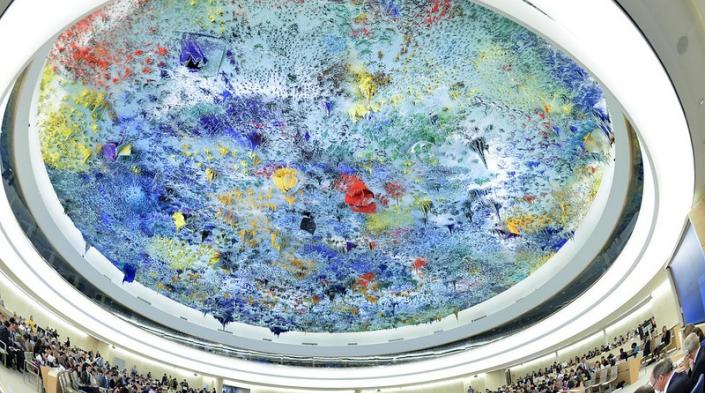 By Paula Martins and Veronica Ferrari

The Human Rights Council (HRC) held its 49th session in Geneva from 28 February to 1 April. During a long session that covered five weeks, the Council discussed important country situations and thematic issues on the intersections between human rights and technology.

APC considers the HRC sessions an important opportunity to influence the setting up of international standards on human rights online and to raise awareness regarding violations to human rights online in specific countries. During this past session, we highlight the following developments:

Important resolutions were adopted on the situation of human rights defenders and on disinformation.

The resolution on human rights defenders was put forward by Norway and focused on defenders in conflict situations. At the beginning of the drafting process, APC along with other international and national civil society organisations sent an open letter to states calling on them to cover some important grounds in the text under negotiation. These included recognition that the use of digital surveillance tools must be regulated to ensure they are not used for violating human rights, including by targeting human rights defenders or journalists, and that mobile networks and internet access must not be shut down. The letter also called for acknowledgement that women human rights defenders are targeted for violence and subjected to intimidation and retaliation because of their efforts to ensure women's rights, including sexual and reproductive health rights, and for demanding accountability for pervasive sexual violence and femicides. The letter further called for recognition of the intersectional dimensions of discrimination, violations and abuses against specific groups of human rights defenders, including women human rights defenders, Indigenous peoples, people of African descent, children, people belonging to minorities, defenders working on issues related to sexual orientation, gender identity and expression, older persons and rural and marginalised communities, and called on states to pay particular attention to the protection needs of different groups in conflict and post-conflict situations, integrating an age- and gender-responsive approach.

The resolution had strong support from states from different regions, but given the current international geopolitical context, negotiations were tense. Russia requested a vote on the resolution, then abstained and advised other countries to do the same. The final result was 39 votes in favour and none against, of a total of 47 voting member states. The resolution was co-sponsored by more than 60 countries.

The final text of the resolution calls on states to refrain from internet shutdowns or other restrictions that prevent human rights defenders from having access to and disseminating information and communicating safely and securely. It also addresses the situation of women human rights defenders who are at risk of sexual and gender-based violence and harassment in addition to other types of threats, violence and smear campaigns.

A resolution on disinformation was also approved, this one without a vote, officially sponsored by Ukraine, Japan, Latvia, Lithuania, Poland, the UK and US. The resolution emphasises the primary role that governments have in countering false narratives by promoting multidimensional and multistakeholder processes to counter disinformation. The text of the resolution is clear in relation to the need to prioritise solutions to disinformation that protect the right to freedom of expression and facilitate people’s freedom to seek, receive and impart information. The resolution also calls on states to encourage business enterprises, including social media companies, to address disinformation while respecting human rights, including through the review of business models, in particular the role of algorithms and ranking systems in amplifying disinformation, enhancing transparency, enforcing all applicable legal protections for users and encouraging due diligence in line with the Guiding Principles on Business and Human Rights. Digital inclusion and literacy were also highlighted.

Finally, the resolution mandated the convening of a high-level panel discussion on countering the negative impact of disinformation and ensuring a human rights-based response to take place in the upcoming session of the Council in June 2022 (50th session).

The Human Rights Council also decided to establish, for a period of one year, a group of three human rights experts on Nicaragua, to be appointed by the President of the Human Rights Council, with a mandate to conduct thorough and independent investigations into all alleged human rights violations and abuses committed in Nicaragua since April 2018, including the possible gender dimensions of such violations and abuses, and their structural root causes, as well as establish facts and circumstances surrounding the alleged violations and abuses, including through the collection, consolidation and preservation of information and evidence. The group is to propose recommendations for the improvement of the situation of human rights in the country and engage with all relevant stakeholders. The group was requested to submit a report to the Council at its 52nd session. In describing to the state of human rights in the country, the resolution refers to the use of several different pieces of legislation to curtail the work of human rights defenders and organisations, including the amendments to some provisions of the Criminal Code and the enactment of the Foreign Agents Registration Law and the Law on Cybercrimes, Law No. 977.

In July 2021, the Human Rights Council appointed Ana Brian Nougrères of Uruguay as the new Special Rapporteur on the right to privacy. During the 49th session, Special Rapporteur Nougrères presented her first report to the Council. The report describes the current situation in respect of privacy in Ibero-America, focusing on personal data protection. The Special Rapporteur suggests that the Ibero-American data protection system could provide “a model for a way of working collaboratively towards a world where the principles of privacy and personal data protection are mutually agreed upon and respected, leading to the implementation of digital privacy standards, and where integration and harmonization are goals that can be achieved without departing from the ethical principles that guarantee respect for human diversity.”

During the Interactive Dialogue with the Special Rapporteur, APC delivered a statement in partnership with its members Derechos Digitales and Intervozes calling attention to three main concerns:

APC is committed to continue to collaborate with the mandate and calls on the Special Rapporteur to establish a constructive dialogue with civil society.

The Special Rapporteur on freedom of religion or belief delivered a report on the rights of persons belonging to religious or belief minorities in situations of conflict or insecurity. In the report he explores the specific needs and vulnerabilities experienced by minorities in conflict situations and examines why and how these vulnerabilities arise. The report questions narratives that fail to recognise the multiplicity of factors (political, social and economic) that contribute towards violence and insecurity. It also challenges prevailing discursive binaries that depict religion as either a source of violence or peacebuilding. Based on the mapping of a number of diverse concrete experiences, the report proposes recommendations to protect and promote religious or belief minorities’ rights during crises and to lay the groundwork for inclusive peacebuilding efforts.

APC also calls on the mandate to continue to work on this matter with states and companies to encourage their compliance with the report’s recommendations.