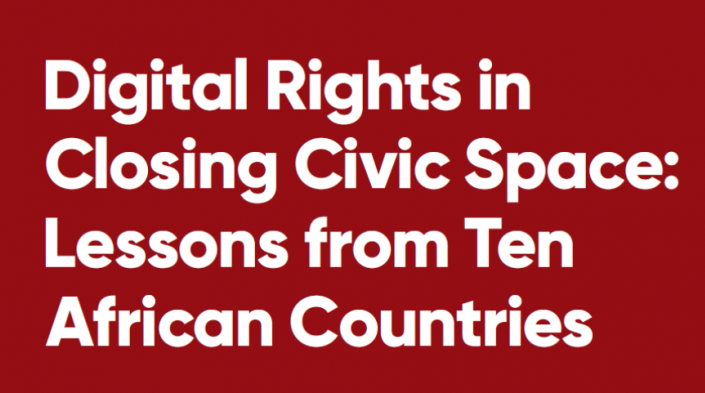 In the first study of its kind, researchers in 10 African countries, including members of the APC network, have documented 115 examples of technologies, tactics and techniques used between 2000 and 2020 to close “civic space” online – the digital spaces where people organise, voice different political opinions, and participate in governance. In contrast, over the same 20-year period there were only 65 examples of steps taken to open civic space.

In each country, it is typically the national government taking action to close civic space and diminish digital rights with the five most common ways being though digital surveillance, disinformation, internet shutdowns, introduction of laws reducing rights, and arrests for online speech. In response to government repression, the reports found 65 examples of where citizens had made creative use of digital technologies such as SMS, social media, encrypted messaging and virtual private networks (VPNs) to voice opposition and open new civic space online.

The 10 digital rights landscape reports were produced by authors from Zimbabwe, Zambia, Uganda, Sudan, South Africa, Nigeria, Kenya, Ethiopia, Egypt and Cameroon. These countries were selected as representative of the main geographical regions of the continent, as well as a range of levels of civic space openness, political and internet freedoms, and economic development. Each report analysed the digital technologies, tools, tactics or techniques being used by governments, citizens, CSOs and other organisations to open or close civic space in their country.

Overall, the research shows that when civic space closes offline, citizens respond by opening civic space online. However, this often prompts governments to take measures to close online space. The overall impact is a reduction in digital rights to privacy, freedom of opinion, and freedom of speech that are crucial for open, democratic societies. Such “digital authoritarianism” is a serious threat to fragile democracies and could threaten the integrity of elections in over 50 African countries with elections scheduled in the next five years.

“Digital rights are important because they enable our human rights, for example, they allow for civic engagement, right to freedom of expression, right to assembly and so much more,” said Juliet Nanfuka, digital rights researcher at the Collaboration on International ICT Policy for East and Southern Africa (CIPESA) – an APC member organisation based in Uganda – and member of the African Digital Rights Network, as well as the author of the Uganda country report. “In the COVID-19 era, the role of digital rights has become even more pronounced as the digital society must become much more inclusive,” she added.

“However, research by the African Digital Rights Network shows that online civic spaces are being closed through various repressive actions, including unwarranted arrests, unwarranted surveillance and various forms of intimidation. In addition, self-censorship online is being fuelled by financial restrictions and online content regulation,” she stressed. “All of these actions inhibit freedom of expression and access to information, both of which are fundamental to have a flourishing civic space.”

The Opening Civic Space Online: Digital Rights in Africa reports, coordinated by the Institute of Development Studies, were conducted by the newly launched African Digital Rights Network, which brings together a unique combination of 30 in-country global digital rights organisations, activists, academics and analysts committed to enhancing citizens’ ability to exercise, defend and expand their digital rights. Network members contribute to this goal by producing evidence, raising awareness, and building local capacity to independently monitor, analyse, and effectively overcome any restriction to digital rights or online democratic spaces. The Network is funded by the UK Research and Innovation Global Challenges Research Fund’s Digital Innovation for Development in Africa (DIDA) initiative.

The members of the African Digital Rights Network include: