HRC40 side event: Defending expression and diversity of religion and belief or non-belief in the digital age

Home / News / HRC40 side event: Defending expression and diversity of religion and belief or non-belief in the digital age 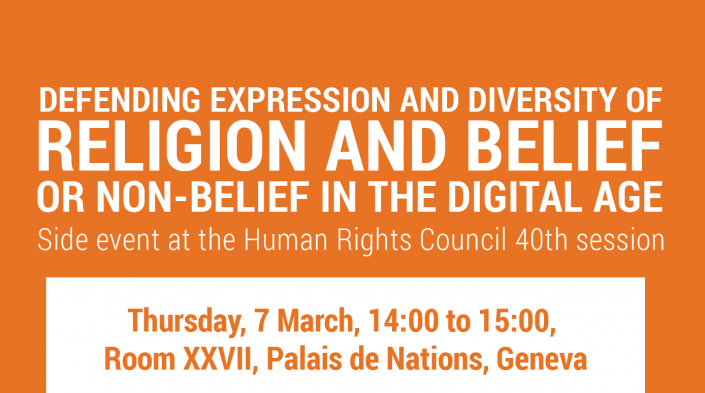 The Association for Progressive Communications, FORUM-ASIA and Humanists International invite you to a side event to discuss freedom of expression and diversity of religion and belief or non-belief in online spaces.

Religion and peoples’ experiences as a result of their belief or non-belief is a highly popular topic of discussion in online spaces. While the UN Special Rapporteurs on freedom of religion or belief have repeatedly called for more inclusive societies and the decriminalisation of blasphemy, what we witness in online and oﬄine discourses is diametrically opposite. The Rabat Plan of Action, which was viewed as a signiﬁcant breakthrough and a collective commitment to combat religious hatred, needs to address the proliferation of religious hatred through the internet and ICTs, and recognise the distinct struggles experienced by persons on account of their gender, sexual orientation or gender identity.

With the rise of right-wing populist governments and discourses across the globe, especially in Africa and Asia, we are witnessing increasing incidents of violence committed in the purported defence of religious beliefs, often by vigilante groups protected by laws and by political and traditional religious elites with vested interests. Women have experienced greater restrictions, especially when religion is conﬂated with cultural and moral expectations.

Please join us to discuss these and related topics, building on the recent report of the UN Special Rapporteur on freedom of religion or belief, which addresses blasphemy laws and online spaces.