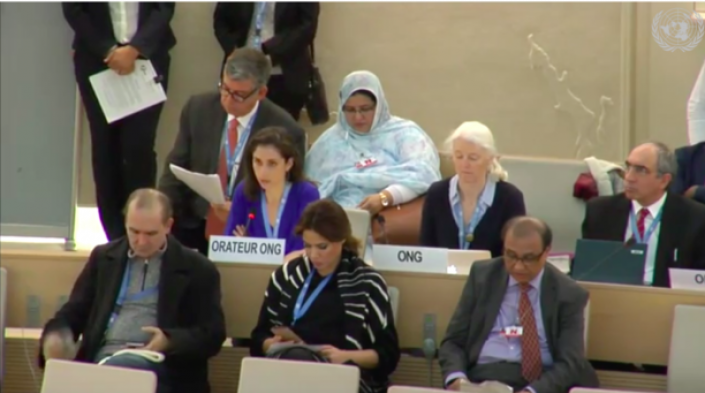 APC participated in the 37th session of the UN Human Rights Council (HRC) last month (5-14 March) with the aim of calling for stronger protections of the right to privacy, especially around encryption and anonymity, emerging threats related to intensive data systems, and gender-based threats to privacy. We also continued to advocate for recognising the importance of the internet for advancing economic, social and cultural rights. We delivered oral statements on gender-based threats to the right to privacy and jointly called for comprehensive protections for secure digital communications. APC also co-organised a side event on digital identity, smart cities and the right to privacy together with Privacy International, with the support of the Privacy in the Digital Age Core Group, and participated in a side event on the future of content regulation and freedom of expression in the digital environment.

Below are some key outcomes from the HRC’s 37th session for those following internet and human rights.

The right to privacy in the digital age (37/2): The HRC adopted by consensus a resolution renewing the mandate of the Special Rapporteur on the right to privacy for a period of three years. This is the first time that the mandate, established in March 2015 at the initiative of Brazil and Germany, has been renewed, and Joe Cannataci, the current mandate holder. will continue in his role.

Terrorism and human rights (37/27): In an effort to merge two separate initiatives on this topic at the HRC – one led by Mexico on the protection of human rights and fundamental freedoms while countering terrorism and another led by Egypt on the effects of terrorism on the enjoyment of all human rights – Mexico and Egypt joined together on a unified text. While not perfect, this consensus text is a positive development as it marks the end to Egypt’s flawed initiative, which opened the door to human rights abuses dressed up as counter-terrorism measures. With regard to internet issues, this year’s resolution “requests States to refrain from providing support to entities or persons involved in terrorist acts, including support in establishing propaganda platforms advocating hatred that constitutes incitement to discrimination, hostility or violence, including through the Internet and other media, and emphasizes in this regard the key importance of full respect for the right to freedom of opinion and expression as set out in the International Covenant on Civil and Political Rights”. The text would have been stronger if it emphasised states’ obligations to respect human rights, including also freedom of assembly and association and the right to privacy, in this context. But still, compared to the Egyptian-led resolution from last year, which encouraged appropriate preventative measures to address the use of the internet and information and communications technologies (ICTs) to advocate, commit, incite, recruit for, fund or plan terrorist acts, the reference to freedom of expression and the ICCPR is welcome.

Promoting Human rights and the Sustainable Development Goals through transparent, accountable and efficient public services delivery (37/7): The Council passed by consensus a resolution led by Azerbaijan on the Sustainable Development Goals (SDGs), which underlines the important role that technological innovations in public services delivery can play in reducing corruption by promoting transparency and accountability and in fostering public access to information. The resolution also stressed the important role of governments in the effective use of ICTs in the design of public policies and in the provision of public services responsive to national needs and priorities, including on the basis of a multi-stakeholder approach, to support national development efforts. Importantly, the resolution notes that everyone, including those residing in remote areas, should have access to simple and consumer-oriented public services delivery, as appropriate, including through the availability of online and mobility services. The resolution stresses the importance of efficiency, accountability and non-discrimination in the delivery of public services and encourages efforts, with the participation of all relevant stakeholders, to strengthen the capacity of national statistical offices and data systems.

Situation of human rights in Myanmar (37/32): As in previous years, the Council called attention to specific violations related to human rights in the online context. The resolution, which went to a vote, notes with deep concern that charges for criminal defamation and other offences have increasingly been used to target journalists, politicians, students and social media users for their peaceful expression, online as well as offline, in particular under section 66(d) of the Telecommunications Act, the Electronic Transactions Law and provisions of the Penal Code, including section 505 (b) and calls for open and participatory legislative processes to repeal or reform those laws in line with international human rights law. It also expresses serious concern about reprisals faced by HRDs, which include being subject to monitoring, surveillance, threats, harassment or intimidation for cooperating or speaking with the UN, and calls upon the government to take appropriate measures to prevent such acts and to combat impunity, bring perpetrators to justice, and provide victims with appropriate remedies.

Finally, the HRC appointed a new mandate holder for the Special Rapporteur on the rights to freedom of assembly and association, Nyaletsossi Clément Voule (Togo). APC congratulates Voule on his appointment and warmly welcomes him as Special Rapporteur. Voule has extensive experience working with HRDs at the International Service for Human Rights, and before that as Secretary-General of Amnesty International Togo and head of the Togolese Coalition of HRDs. His appointment comes as freedom of assembly and association are under threat around the world, both online and offline. We encourage the Special Rapporteur to consider, as the previous mandate holder intended, to explore internet-related dimensions of freedom of assembly and association online, including key challenges, such as internet shutdowns, the digital divide, surveillance, restrictions on the use of encryption, trolling and misinformation, and gender-based attacks online. We stand ready to support the Special Rapporteur in his mandate.

At APC we are looking  forward to the June session, where internet issues will be a key part of the agenda. Some specific resolutions to watch include the annual resolution on violence against women (VAW), which is expected to focus on online VAW this year, and the biannual resolution on the promotion, protection and enjoyment of human rights on the internet. In addition, the presentations of the reports of the Special Rapporteur on VAW, focused on online VAW, and of the Special Rapporteur on freedom of opinion and expression, which will focus on content regulation in the digital age, will surely spark interesting debates at the Council.

More on the Human Rights Council on our project page, and find upcoming information and events on the HRC website.