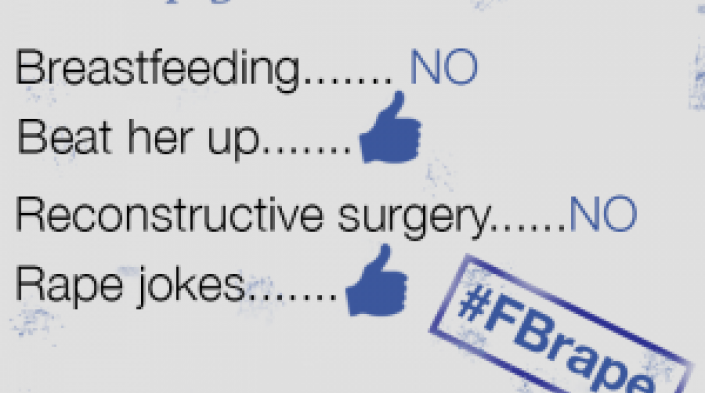 “We, the undersigned, are writing to demand swift, comprehensive and effective action addressing the representation of rape and domestic violence on Facebook.” This is how the Open letter to Facebook begins. The kick-starter manifest of the wider campaign launched on 21 May 2013, under the name “Take action to end gender-based violence on Facebook,” which includes the support of about 100 collectives, among them the Take Back the Tech! campaign and APC Women’s Rights Programme.

The campaign asks companies whose publicity appears on explicitly violent Facebook pages and profiles to help pressure Facebook to re-examine its response to violence against women and girls. Facebook is being called to take three actions:

1. Recognise speech that trivialises or glorifies violence against girls and women as hate speech and make a commitment to not tolerate this content.

3. Effectively train moderators to understand how online harassment differently affects women and men, in part due to the real-world pandemic of violence against women.

“To this end, we are calling on Facebook users to contact advertisers whose ads on Facebook appear next to content that targets women for violence, to ask these companies to withdraw from advertising on Facebook until [they have taken] the above actions to ban gender-based hate speech on [their] site,” invites the letter. Pages in which rape is trivialised, as well as physical violence against women, with photographs and captions of women beaten, tied up, drugged, and bleeding, are posted and shared with impunity over Facebook.

And while Facebook admits pages such as those mentioned before its moderators regularly remove content such as pictures of women breastfeeding, women post-mastectomy and artistic representations of women’s bodies, banning them as “pornographic” when in fact they are women’s political speech involving the use of their bodies in non-sexualised ways for protest. “It appears that Facebook considers violence against women to be less offensive than non-violent images of women’s bodies,” claims the letter. Many people demand to see Facebook enforce its own procedures, terms and community guidelines to end violently racist, homophobic, Islamophobic and anti-Semitic content and now also against gender-based hate speech.

Almost all of the advertisers that have responded so far to the campaign have stressed that they do not condone or endorse any offensive content or pages on Facebook. This is good, of course, but their responses are merely declarative if concrete actions are not taken.

Campaign wins so far involve companies such as House of Burlesque, Candypolis, Grow Your Own Theatre, Capturing Childhood, J Street, Nissan UK and WestHost. Other companies responded but still have not pulled their ads, among them American Express, ZipCar UK, FinnAr, ZipCar, Ocado and David Lloyd Leisure.

And finally, some companies have already declined to pull their ads from Facebook pages, such as Vistaprint, Audible and Dove. Many of the advertisers responded that they are in close touch with Facebook about this situation. “Our adds on their platform are targeted at individual users, not tied to the content or pages created by users on the Facebook platform,” argues Vistaprint, in the same line with the responses received from Dove and others. They rely on individual users to report individual pages. But this, of course, is not enough. This response sounds very much like what Facebook itself would say, which is essentially that they will do nothing.

Experience has taught us that reports do not work and Facebook is subjective and selective about applying its own community standards. Facebook has categorised gender-based violence as “humor,” normalising violence against women.

Contradictions between Facebook’s words and Facebook’s actions regarding gender-based violence and misogyny are alarmingly abundant. Interestingly, at the same time that the campaign was launched, it has been announced that Facebook became the sixth company to join the Global Network Initiative, a multi-stakeholder group of companies, civil society organisations, investors and academics, who have created a collaborative approach to protect and advance freedom of expression and privacy in the ICT sector.

According to the announcement published by GNI, the Vice President of Communications, Marketing and Public Policy at Facebook said that “advancing human rights, including freedom of expression and the right to communicate freely, is core to our mission of making the world more open and connected.” “By joining this important collaboration between companies, human rights organisations, investors, and academics, Facebook is fully embracing its responsibility to protecting the rights of its users and setting an example that other companies should follow,” said the president of the Center for Democracy and Technology in the same article.

“We call on Facebook to make the only responsible decision and take swift, clear action on this issue, to bring your policy on rape and domestic violence into line with your own moderation goals and guidelines,” ends the campaign open letter.

“We are pleased to announce that Facebook has responded with a important commitment to refine its approach to hate speech. Facebook has admirably done more than most other companies to address this topic in regards to content policy. In a statement released today, Facebook addressed our concerns and committed to evaluating and updating its policies, guidelines and practices relating to hate speech, improving training for its content moderators and increasing accountability for creators of misogynist content.

Facebook has also invited Women, Action & the Media, The Everyday Sexism Project and members of our coalition to contribute to these efforts and be part of an ongoing conversation. As part of these efforts, we will work closely with Facebook on the issue of how Community Standards around hate speech are evaluated and to ensure best practices represent the interests of our coalition.”

Follow up the wins and updates of the campaign

Meet the signatories of the campaign:

Only way to avoid advertising on rape-supporting pages is to not buy @Facebook ads. Make FB respect its own community standards #FBrape