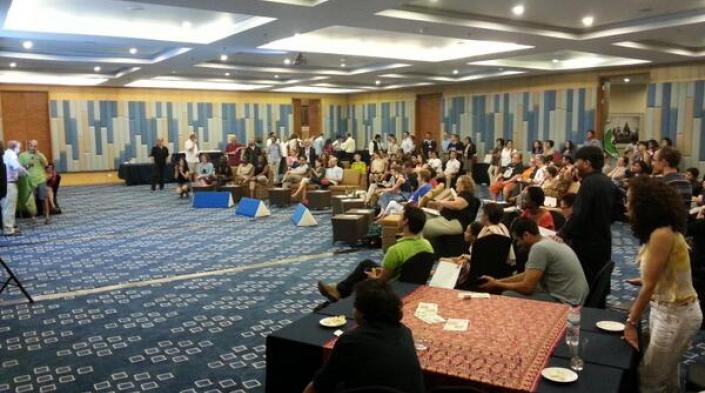 On 21 October, 2013, the Disco-tech brought together over 100 techies, human rights defenders and rights activists from the eight Internet Governance Forum in Bali, Indonesia to raise awareness, share knowledge and stories, and build capacity in relation to issues of privacy, surveillance, and security online.

Hosted by APC and Tactical Technology Collective, the evening was kicked off with Ian Peter screening of the launch of Pegasus, one of the early network nodes that founded APC.

The collaborative effort featured nine “lightning talks” by experts in the field and activists. Stations were set up in parallel where people could learn about encryption, file sharing with “Owncloud”, and the magic of Storymaker, a Guardian Project’s app to create great stories.

It was a truly engaging event. Tactical Tech’s Gillo Cutrupi MC’d the event, and had speakers wear a sarong – each in their own unique way.

“One of the highlights of my time in Bali was the Tactical Tech-APC Disco-tech. It was really a space for networking – a comfortable hang out where you could go up to anyone, introduce yourself and find out what they are up to. APC and Tactical Tech have that effect of making networking easy, and so did the Disco-Tech format. I heard plans from Take Back the Tech! partners to have disco-tech’s in their country – have even shared the sticker graphic with One World (OWPSEE) in Bosnia and Herzegovina. I’ve had musical speed geek sessions in my trainings and am thinking we can add a disco-tech flare to our safe-sex/safe-internet fairs we’ve had in Mexico,” said APC’s Women’s Rights Project Associate Erika Smith.

Global Voices’ Ellery Biddle shared the case of Cuba where the blogosphere is unique. Citizens blog openly, some even display their ID numbers online. Since online anonymity is not an issue in this community, should surveillance be a concern? This case shows the importance of local context when considering the debate between freedom of expression and association versus surveillance and privacy.

“On the internet if the product is free, you are the product,” said Oktavia Jonsdottir (IFEX) who spoke of the tales of an internet insurance sales person.

Gerard Harris (eQualit.ie) did a “knock knock, who’s there” with the audience to demonstrate a Distributed Denial of Service (DDoS) attack in his talk about Deflect.

Sarah Clarke from Pen International spoke about the impact of surveillance on writers. State surveillance during the McCarthy era in the United States had a chilling effect on creativity and freedom of expression. What effect is it having on the writers of today?

This year, there was a major security vulnerability in the registration process of the IGF, which compromised people’s private information. Alex Comninos revealed this security flaw at the Disco-tech. It is a chilling reminder of the importance of defensive security in wake of global internet surveillance.

Check out the Storify for more highlights!