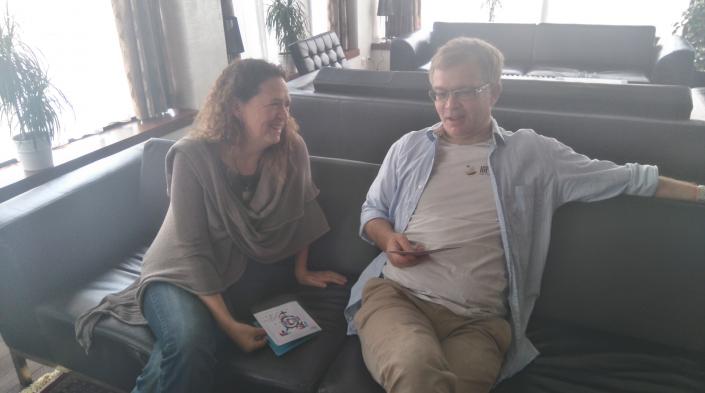 The APC European members meeting that took place on 19-20 October 2016 in Sarajevo was the perfect venue for Leila Nachawati Rego from APCNews to meet Edward Maw and Karen Banks from GreenNet, one of APC’s founders and the first organisational member of the network. They reviewed GreenNet’s long and fruitful relationship with APC, its groundbreaking past as the first NGO internet service provider in Europe, and what lies ahead.

In 1985, long before the web, dot-coms and social media, a bunch of environmental activist techies worked together to devise tools that would support networking efforts within the green movement. They called the operation “GreenNet” and soon after, they began collaborating and exchanging information with similar networks in other countries, such as PeaceNet and EcoNet. In 1990, they joined with other organisations to found the Association for Progressive Communications (APC), a network that now comprises 51 organisational members and continues to grow.

For many years, GreenNet provided an international gateway for small, indigenous networks in African and Asian countries, which supported email exchange between the internet and 52 networks in these two regions – sometimes the link being the only means of electronic communication for NGOs and other organisations in those countries.

Thirty years laters, even when the tools, skills and access landscape have changed worldwide, GreenNet continues to play a key role in supporting social justice movements in their use of communication technologies as a not-for-profit ethical collective internet service provider.

APCNews had the rare opportunity to have a conversation with two people linked to GreenNet from both extremes of its history: Edward Maw, web project manager and one of the latest staff additions, and Karen Banks, currently APC’s operations manager, but also an important link in GreenNet’s past development.

APC: Can you walk us through the relationship between GreenNet and APC?

Karen Banks: I can’t think about APC without thinking of GreenNet, which is among our founders and also the first member of our APC network. GreenNet was the first ISP to provide connectivity to NGOs in Europe, and then it became the home of the founding of the Women’s Rights Programme.

Edward Maw: GreenNet is very tight little group, like a family. Meeting with APC staff and APC members feels like meeting with cousins. For me, as a newcomer, it is an honour to work at an organisation with all this history behind it. Mitra, one of GreenNet’s founders, can be credited for the invention of the url (see Mitra’s claims to internet fame).

KB: Yes, we were connected with the people who invented the internet, like Mike Jensen, who still works at APC. This included connectivity in Africa, building networks, providing connection for NGOs… Others were building the technology for military uses, we helped build the networks. We can say that GreenNet pulled it all together to make it what we know as The Internet.

APCNews: What were GreenNet and the rest of the APC founding members doing back then? Were they aware they were making history?

KB: Founding members included IGC, Web Networks, GreenNet, NordNet, Nicrau, Alternex… Back in the late 80s, they were the main line of communications to places like Cuba, Nicaragua, El Salvador, Russia or South Africa (during the anti-apartheid movement). That legacy is important, it was a life-changing experience.

Among the highlights I remember providing a connection between the former Yugoslavia and the rest of the world during the war (a gateway connection from the internet connected the world to the former Yugoslavia by a Fidonet connection, in the early 90s). It was one of the only means of communications, and it allowed for a famous diary written by a Bosnian man to be published and sent out every day, before blogs existed, as the voice of resistance and reconciliation. GreenNet was the host hub for email hubs in Eastern Europe, along with Africa and Asia, 65 small email hubs in total.

This was a time of great disturbance; peace activists who were techies kept running into one another, and they realised that to create a permanent connection among them could be the core of a network that would connect the peace and environmental movements.

The most important movement for me was the Earth Summit, a key moment because it linked the international kind of governing body that we know with people from all over the world through information and communication technology. NGOs had never had access to info coming out of a UN conference. A critical mass of APC members, staff, NGOs, APC as we know it emerged from that massive sort of connection in Brazil. Brazil is very important to our history, and it is there that we celebrated APC’s 25th anniversary (at the 2015 Internet Governance Forum).

EM: Congratulations! You are 25 and we just turned 30. Sometimes I wonder how we managed to stay for so long. How is this sustainable? I think it is because we focus on what we do, despite the fact that finances are struggling in this field. We are not for profit, and the relationships within our group are very important, the trust we have in each other.

APCNews: Tell us more about the work you are doing right now?

EM: It has changed, but following the same line. Right now we are supporting a diversity of projects, including a very interesting one with an organisation called Ugly Mugs. It is a resource for sex workers as part of the UK Network of Sex Work Projects that allows sex workers to check if clients have been recorded as violent. It is very useful and it is working well.

GreenNet remains committed to helping people have safe, secure channels so that they don’t rely on proprietary technology. Elderly technology allows us to see that shiny social media are not the only thing that exists. We have managed to secure alternatives to corporate-owned/proprietary technology and it is important that we all continue in this direction.

KB: I hope we continue to remember where we come from. I think GreenNet’s commitment to collective responsibility will see it through for another 30 years. It doesn’t really matter how small you are, it matters to stick to your commitments. What we do is plant seeds, alternatives. There are alternatives, let’s continue to protect our spaces.

For us at APC, this is the era of the members. Our members cannot deal with the challenges alone, we need to work together more, build a bigger, stronger network. This meeting in Sarajevo is one more step in that direction, as member meetings are the lifeblood of APC, they drive the organisation’s vision. Being here this year feels invigorating, it feels full-circle somehow, or a spiral…

EM: There is a huge amount of bravery in staying out of the mainstream. We know what we are doing. We are here for people who want to participate in non-mainstream channels. The internet seems to be fragmenting again, it is increasingly turning into walled gardens, so it is more important than ever to promote the internet in a free way (as in beer and speech). We need to make sure skills are not lost, with technology supporting tools like Nextcloud, Jitsi, put together by small committed groups of people. These tools are seeds of possibilities, multipliers. I hope for APC to get more and more members and have a bigger and stronger network. Yes, it is a spiral.