FIFAfrica17: Advancing freedom of expression and access to information towards deepening democracy in Africa

Home / News / FIFAfrica17: Advancing freedom of expression and access to information towards deepening democracy in Africa 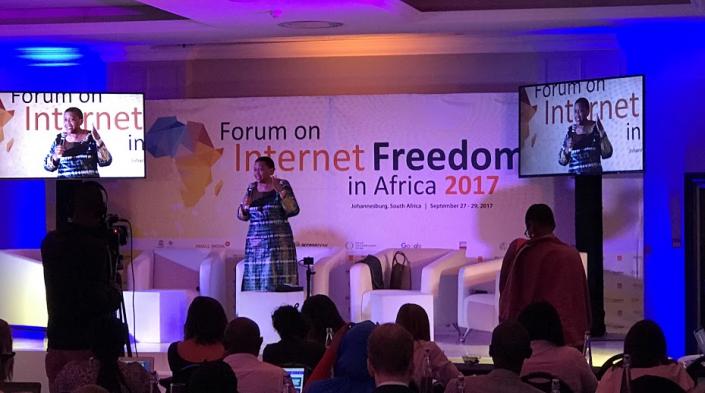 At the launch of the fourth annual Forum on Internet Freedom in Africa, hosted for the first time in Southern Africa by the Collaboration on International ICT Policy in East and Southern Africa (CIPESA) and the Association for Progressive Communications (APC), over 150 policy makers, civil society actors, technologists and intergovernmental agencies took part in celebrating the work and legacy of Adv. Faith Pansy Tlakula, in advancing freedom of expression and access to information towards deepening democracy in Africa.

Tlakula has served Africa as both the Special Rapporteur on Freedom of Expression and Access to Information for two consecutive terms, including as chairperson of the African Commission on Human and Peoples’ Rights. With no doubt, she has left an indelible mark on the region’s ability to deepen the promotion and protection of human rights, generally, and has been instrumental in the development and enforceability of the rights to freedom of expression and access to information, on which vital democracies depend, for Africa.

Tlakula was instrumental in the development of the African Commission’s robust Model Law on Access to Information for Africa, which provides for sound mechanisms for realising the right to access to information in order to promote transparency, accountability, effective governance and development, with the collaboration of the the African Platform for Access to Information (APAI). This contributed to 22 countries adopting access to information legislation.

More recently, in 2016, and with the support of the African Declaration on Internet Rights and Freedoms Coalition, she championed the expansion of the African Commission’s view on the mechanisms required to realise the right to information and freedom of expression by African states to include taking positive measures to provide and guarantee access to the internet in the Commission’s Resolution on the Right to Freedom of Information and Expression on the Internet in Africa. During her address to the Forum, Tlakula took a moment to acknowledge the efforts of civil society, media and industry role-players in South Africa, which include the South African National Editors’ Forum, the Interactive Advertising Bureau, Media Monitoring Africa and the Association for Progressive Communications, who have engaged and challenged her to accelerate the realisation of the Resolution’s call to state parties at the South African level through the launch of their paper, Perspectives on Universal Free Access to Information Online in South Africa.

The paper seeks to form a basis for formal engagement with public institutions in South Africa, including the information regulator, to establish immediately implementable mechanisms and minimum norms and standards for accelerating free and ready access to public information through a rights-respecting rapid deployment of public access networks as well as free and zero-rated internet services.

Currently, under her stewardship, Tlakula has laid the foundation for a process towards the development of Guidelines on Access to Information and Elections for Africa, which seek to enhance the openness and transparency of electoral processes across the continent. In her remarks to the Forum, Tlakula noted how the South African High Court’s judgment on Wednesday, which found that "information about private funding is reasonably required for the effective exercise of the right to vote and to make political choices,” presented an interesting case study vís-à-vís the Commission’s proposal for the provision for mechanisms that facilitate and promote proactive disclosure of such information in its Zero-Draft Guidelines on Access to Information and Elections for Africa.

In closing, Tlakula stated that there is more work to be done. She pointed out that instruments such as the Declaration of Principles on Freedom of Expression in Africa, which was adopted by the African Commission in 2002, need to be updated to include access to information and to reflect the importance of the internet as an enabler of free expression. Tlakula further urged participants in the Forum to be proactive in ensuring that rights-respecting legislation in Africa is not just developed and adopted, but implemented, used and enforced.