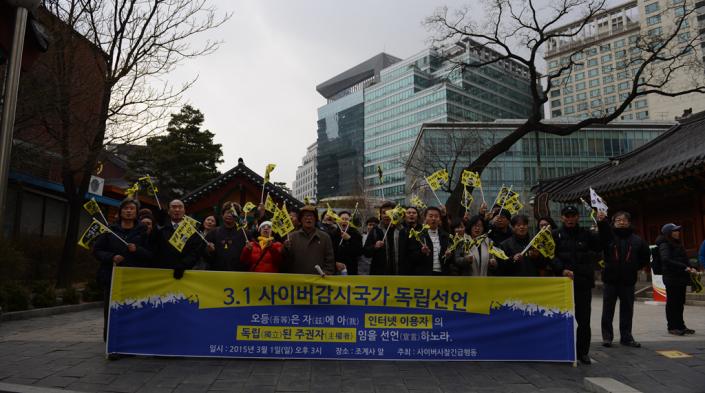 Cyber crime laws, surveillance, breaches of privacy, and other state-controlled restrictions are receiving increasing citizen response. From the Marco Civil in Brazil to NETmundial and Web We Want, numerous initiatives have emerged to respond to threats to freedom of expression, privacy, access and other basic rights on the internet. To support local initiatives, APC has launched the Local Actions to Secure Internet Rights (LASIR) project.

During 2015, APC will facilitate national initiatives and support human rights campaigns in ten countries across the globe where opportunity, capacity and momentum already exist.

In South Korea, Jinbonet organised the Surveillance Victims Day on 1 March, the day that South Koreans celebrate their independence. Around 100 people attended this event and adopted the “Declaration of Independence from the Cyber Surveillance State”. According to Byoung-il Oh of Jinbonet, “One reason that this kind of mobilisation was possible is because many of the 2,368 victims of cyber surveillance were activists from civil society organisations, trade unions and the labour party. There were many progressive citizens who were very angry at the regression of democracy under the current government.”

In the Philippines, the Foundation for Media Alternatives (FMA) convened a national stakeholders meeting around the time of the RightsCon summit in Manila, and worked on the draft of a “PH Declaration on Internet Rights and Principles”. By the end of the project, FMA expects this document to be adopted by policy makers, increasing understanding about internet rights principles and standards and influencing relevant policy instruments.

Project partners in Uganda and Brazil have been developing their contributions to public consultations on draft bills on data protection and privacy, while in Jordan and Bosnia and Herzegovina, the Jordan Open Source Association (JOSA) and OneWorld Platform for Southeast Europe (OWPSEE) are bringing in new organisations to discuss internet rights and principles in working group meetings.

Most project partners are now planning to attend The Hague Conference on Cyberspace (16-17 April), and others will continue leading campaigns in their countries, trying to build a community of shared views on internet rights and principles.

Who supports the Local Actions to Secure Internet Rights project?

With the support of the Ford Foundation, APC will engage with local partners to identify their needs and opportunities for action, providing targeted support in the form of joint policy analysis, skill building and strategising for change.

Organisations will implement their strategies and develop collaborative networking and advocacy. Each country project is based on the national context and on the reality and needs of organisations working on the ground.

What will make it possible for this project to be implemented in a short period of time is the fact that partners are strong local organisations, with ongoing work on internet rights. They will develop together with APC an integrated strategy of policy research, context analysis, coalition building, media outreach and popular engagement.

The main goals that civil society organisations will try to achieve are related to the internet and human rights in areas such as privacy, surveillance, freedom of expression, network neutrality, and diverse and decentralised infrastructures. At the same time, with the support of APC and its global partners – including the Swedish International Development Cooperation Agency (Sida) and Article 19, among others – they will advance the overall Web We Want goals.

What countries are involved?