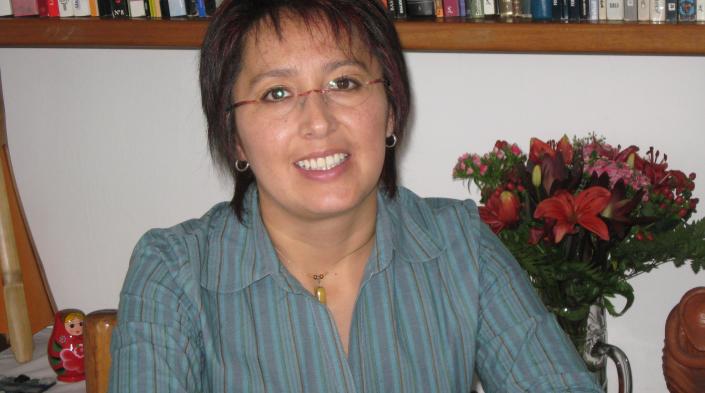 Last month APC’s Valeria Betancourt was named the third most influential person in internet public policy in Latin America in a survey carried out by DIRSI. She also became APC’s policy manager after focusing on our work in Latin America since 2001 taking over from South African Willie Currie.

Valeria Betancourt: In early 2000, APC’s member organisation in Ecuador, Intercom-Ecuanex, which I belonged to, began to reflect on the importance of public policies on internet access as a means of ensuring that the transformational potential of ICTs reached the majority of the population.

This was back when the first community telecentre projects were being set up, and there was discussion around not only the focus of interventions, but also on their reach and impact on people’s daily lives. This was when my involvement in ICT policy first began.

In 2001, the executive director of Intercom-Ecuanex started heading up APC’s Latin American ICT Policy Monitor project, which was aimed at promoting civil society involvement in ICT public policy processes at the national and regional level. The idea was to make ICT policy more manageable and understandable.

I had the opportunity to contribute to this project from the very beginning, and I think this is largely where my passion for this field of work came from. The Policy Monitor filled a void in Latin America in terms of the availability of information for advocacy, raising awareness about the implications of ICT policy issues, and empowering civil society organisations to engage with ICT policy processes to voice their demands from a human rights and social justice perspective.

Valeria Betancourt: No. Prior to 2000, I was involved in health projects which were aimed, among other things, at generating scientific evidence for the adoption of public health policies. It was an interesting way to begin policy work, because of the possibility of combining technical approaches with political objectives.

APCNews: What has been one of the most fruitful policy engagements you’ve worked on?

Valeria Betancourt: The whole process of the World Summit on the Information Society (WSIS) including the preparatory process and follow-up [2002-2005] was like a basic training school for ICT public policy work.

Participation in this process has allowed me to act at the national, regional and global levels, exploring ways of integrating them more effectively. It expanded and strengthened my capacities as a policy activist, and helped me better understand the transborder connotations of ICT public policy issues and internet governance, as well as understanding transformational processes from the perspectives of different stakeholders.

The WSIS process has also been very useful for understanding the difficult interactions between the South and North and the conditions faced by developing country activists working in global policy spaces to bring about favourable changes in the increasingly complex field of ICT policy.

APCNews: And the most frustrating?

Valeria Betancourt: The recent and still unfinished process of the formulation and adoption of a communications law in Ecuador.

APC, together with other local social organisations and a specialised group of consultants, has been working over the last two years to develop technical and policy inputs for the new law, to ensure that the communications rights enshrined in the country’s constitution are fully realised. But very little has been achieved.

The legislative commission responsible for formulating the law failed to establish mechanisms for real participation and consultation, and there was no broad public debate on critical issues like the redistribution of radio and television frequencies, access to ICTs or the independent role of public media for strengthening democracy.

The media corporations and traditional political sectors have also limited the devate to the defence of the freedom of expression, confusing it with free enterprise. The dynamics of power relations in which the debate has taken place have led to the polarisation of positions. This has has not only reduced the space for deliberation but also limited the possibility of addressing the key issues put forward by communications rights activists.

From my standpoint, the possibility of improving the material and concrete conditions for the full exercise of the right to communication in Ecuador has been lost.

APCNews: You’ve been with APC working in the Latin American branch of the policy programme since 2001. What do you think will be your immediate challenges as you take up your new international role?

Valeria Betancourt: There’s no doubt that since WSIS, the issue of internet governance has become more complex and central.

This results from a series of factors, like the growing concerns around government control of the internet due to increased terrorist and criminal activity on the web and restrictions on freedom of expression on the internet by authoritarian governments. It is also conditioned by the technological advances associated with the growth of broadband and mobile networks, the expansion of Web 2.0 and the jump to Web 3.0. And the increasingly fraught battle over intellectual property rights to internet content.

The immediate challenge has to do, on the one hand, with continuing to identify the policy implications of these issues in increasingly complex and changing contexts, building and strengthening ties with different stakeholders and proactively engaging in global as well as regional and national spaces to effectively influence the consolidation of a free and open internet.

On the other hand, CIPP faces a major challenge in defining a framework to guide its policy work so that it is relevant to these major goals and at the same time contributes in an integrated and significant way to the strategic priorities defined by the APC membership.

But the challenges are not limited to these areas. The resources available to civil society activists for regular and ongoing engagement in global internet policy-making spaces are increasingly scarce.

At the same time, we cannot overlook the fact that some governments are pushing for the establishment of intergovernmental mechanisms for decision making around the development and governance of the internet, which represents a backslide in the progress made in building multi-sectoral policy-making processes.

APCNews: APC was chosen by its peers to represent civil society in the eLAC2010, the Latin American governments’ information society development process. A lot of that was thanks to how your work is viewed in Latin America. Who will be carrying the torch in the future in Latin America for APC?

Valeria Betancourt: APC has played an important role in opening and establishing spaces for formal civil society participation in eLAC. I am pleased to report that this work will be continued and strengthened with the experience and commitment of my colleague Dafne Plou, the coordinator of the APC Women’s Networking Support Programme in Latin America.

Valeria Betantcourt, 3rd from the left during the Latin American Internet Governance Forum, 2010.