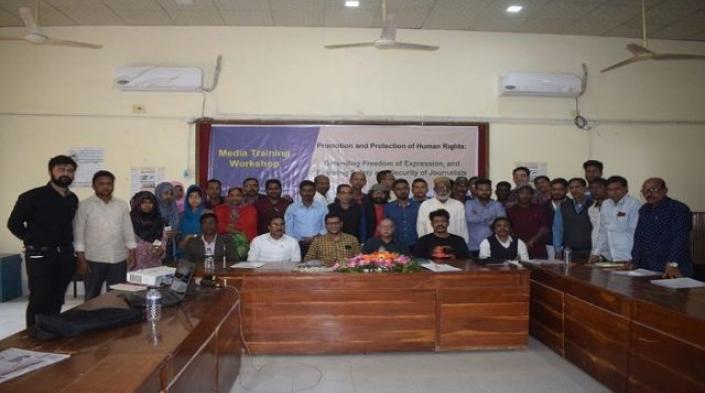 By Voices for Interactive Choice and Empowerment (VOICE)

In the face of a rising number of attacks on journalists in Bangladesh, Voices for Interactive Choice and Empowerment (VOICE), an APC member organisation, hosted a day-long media training workshop titled “Defending freedom of expression and ensuring safety and security of journalists”. The workshop, held on 22 February in Jamalpur, was organised with the support of the United Nations Development Programme (UNDP), and was attended by more than 30 journalists based in the district.

Speakers and trainers emphasised the recent situation in Jamalpur, where journalists have become the victims of physical attacks in alarming numbers. A total of 48 journalists have filed a general diary (GD) with the local police, seeking protection for their lives, while two journalists were victims of attempted murder in separate attacks a few months ago.

Moderating the inaugural session, Md. Abtab Khan Shawon, a research and monitoring associate at VOICE, said that Bangladesh probably does not have a high number of killings of journalists, but in terms of threats and physical assault, Bangladesh is undoubtedly one of the countries at the top of the list. “Furthermore, when it comes to impunity for crimes against journalists, Bangladesh holds a very bad ranking,” he added.

In his keynote address at the inaugural session, the District Commissioner of Jamalpur, Md. Enamul Haque, described the media in Bangladesh as aggressive and vibrant. “Journalists often play a bold role in exposing corruption and wrong-doings,” he noted. “Their brave work earns them public admiration, but it also exposes them to threats on their life, harassment and insecurity. The safety of journalists has become a concern in the country. Incidents of attacks on journalists are rising and must be stopped soon,” he stated.

Journalists participating in the workshop raised serious concerns around the challenges they face when reporting on human rights abuses, corruption, the justice system and governance. While there may seem to be a healthy media ecosystem in Bangladesh, journalists who report on these issues are often reminded that there are “red lines” that must not been crossed, and many have faced dangerous circumstances with no protection from the government.

Faruq Faisal, the regional director of ARTICLE 19, presented an analysis of the country situation based on human rights and freedom of expression, legal instruments, and the challenges facing journalists. The Ministry of Information controls broadcast licensing for both commercial and community outlets, he said. Television stations have occasionally been closed, ostensibly for being in breach of broadcasting regulations. A draft Broadcast Act was pending at the end of 2016, but drew criticism from rights groups for establishing jail terms, rather than fines and other civil measures, for the violation of its provisions, he added. Moriyom Shelly of ARTICLE 19 also presented a paper that detailed safety measures that journalists can adopt in the course of their work.

Saleem Samad, the Bangladesh correspondent of Reporters Without Borders, told the workshop that the government at times interferes with journalistic work through surveillance. Some journalists’ email correspondence is reportedly watched by police, and those brought in for questioning have been asked to supply personal internet passwords to intelligence officers. An official government committee was formed in 2014 to monitor blogs and social media websites, and to identify individuals who produced or posted anti-Islamic content, which is alarming for free expression, he warned.

Rafiqul Montu, a senior journalist and media trainer, emphasised the need for local journalists to adopt “tricks and tactics” to ensure their safety. Local journalists including Hafiz Raihan Sada, president of the Jamalpur Press Club, and senior journalist Mostafa Babul shared their experiences of harassment and the challenges they have faced in their work. They called for more workshops with hands-on training for journalists on basic safety and security tools, and also stressed that the government must take proper measures to stop harassment against journalists.

This article is based on a press release from VOICE.

VOICE is a rights-based organisation that works with diverse stakeholders including vulnerable communities, policy makers, civil society groups and the youth. Its approaches are rooted in universal rights and justice for all through inclusive and sustainable development and conservation. Its main areas of focus are food sovereignty, aid effectiveness, economic justice and the right to information and communication. It has been a member of the APC network since 2006.