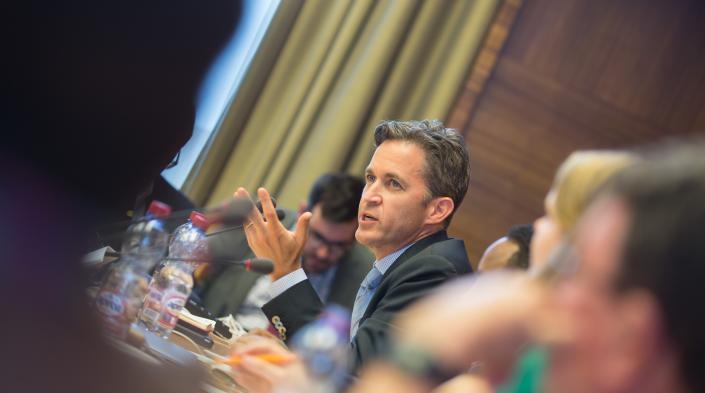 The Special Rapporteur on the promotion and protection of the right to freedom of opinion and expression, David Kaye, presented his report on content regulation in the digital age to the Human Rights Council on 19 June. Building on the Special Rapporteur’s previous report on the role of digital access providers in ensuring the provision of human rights, this year’s report focused specifically on major human rights concerns raised by commercial content moderation. It outlines recommendations to states on how to ensure they uphold rights and follow due process, as well as to companies on how they should incorporate to emphasise transparency, due diligence, regular public input and engagement, and access to remedy. (See Reorienting rules for rights, the APC-produced illustrated summary of this report.)

The report was welcomed by many member states, who focused on different aspects of the issue in their statements responding to the report. Some addressed the challenge of “fake news” while others wondered how internet companies can be self and government-regulated. This article includes highlights from the interactive dialogue with states at the Human Rights Council in reaction to the report.

The exercise of individual’s right to freedom of expression and opinion should not in any way negate the rights of others, and the imperative of the rule of law, peaceful co-existence, which states have a duty to uphold. This is more so, with the current trend of disinformation and deliberate spread of hate speech and fake news, which are capable of threatening the peace, security and wellbeing of the society. In this regard, states have the responsibility to ensure that the exercise of these rights is conducted within the ambit of the rule of law, and without undermining peace and security.

Latvia specifically mentioned internet companies playing a key role in the spread of information, and that they also contribute to the amplification of online disinformation. Albania further echoed concerns around illegal content on the web, such as child sexual abuse, about the criminalization and censorship of content on online platforms, and disinformation and propaganda, as a means of limiting the accessibility of independent information. The Philippines also mentioned their concern over states being too quick to restrict freedom of speech online due to the spread of fake news and that the state should be cautious before restricting speech online.

A few states also highlighted the issue of the increasing spread of hatred, racism and xenophobia online. Pakistan condemned the spread of these messages, as they affect not only human rights but also the security of minorities, women and children in particular. Similarly, Croatia noted the challenge that racism and xenophobia maintain online, adding “that effective implementation of human rights standards provides a good base for accountability for both states and companies while mitigating threats posed by hate groups in the online sphere, but hold that hate also needs to be addressed through legislative and other measures necessary”. In addition, Chile echoed these ideas, claiming states need to ensure safe online environments due to all the threats posed on the internet.

A number of states asserted that governments should put more efforts into legislation that properly moderates content. Many other states urged companies to create policies on content regulation to ensure the human rights of their users. Both states and companies were encouraged to be held accountable for content moderation. Ukraine urged for international monitoring in order to prevent further human rights violations. Uruguay, Switzerland, Argentina on behalf of many, Denmark on behalf of many and Ireland all mentioned Guiding Principles on Business and Human Rights as a workable framework for moderating content. Many expressed interest in implementing those ideas within their own legislation. Although Cuba acknowledged these principles, its statement continued on to say that “the voluntary nature of these leaves a great legal vacuum in its fulfillment. National legislation and a legally binding document that regulates the respect of human rights by companies, will be the safest way to avoid misuse of ICT by them.”

Additionally, many states asked the Rapporteur questions concerning regulation and best practices. The majority of the questions from states focused on how to manage content without restricting freedom of expression and how to ensure the respective responsibility of all stakeholders.

A few states took the opportunity of the interactive dialogue with the Special Rapporteur to raise concerns with respect to restrictions to freedom of expression online imposed by the Russian Federation. For example, the United Kingdom called out the Russian Federation, mentioning that their "restrictive laws and website blocking have increased the pressure on independent media since 2012. TV channels are state-run propaganda machines, journalists have been detained and more and more bloggers arrested for their views. Physical attacks on journalists go unpunished. Reporters Without Borders consider Chechnya and the illegally annexed Crimea to be news 'black holes from which little news emerges.'" Ukraine further mentioned their concern about “a massive campaign of propaganda and incitement of hatred against Ukraine and Ukrainians, perpetrated by Russia’s state-owned media and public figures. This has played a role in the occupation of Crimea and in triggering the conflict, with ensuing Russian aggression, in eastern Ukraine."

The statement of Ukraine draws attention to a lack of space for independent media and state-controlled media pushing state-driven propaganda.

You can view the interactive dialogue here.