Community networks and the art of the tightrope walker: Challenges, achievements and experiences that go beyond access

Home / News / Community networks and the art of the tightrope walker: Challenges, achievements and experiences that go beyond access 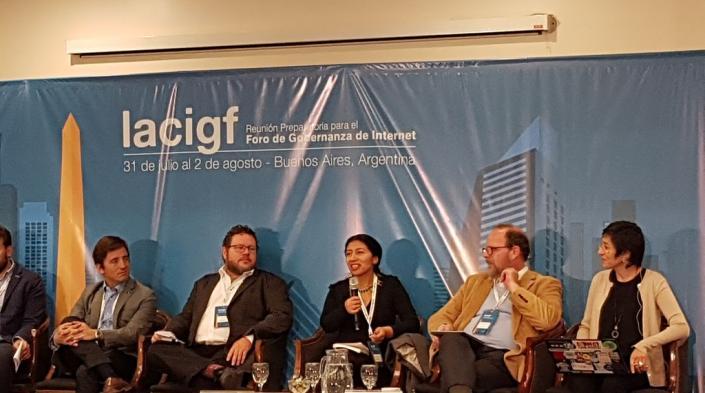 Valeria Betancourt started the discussion by examining the definition of the concept of community networks as well as their challenges and social impacts. She noted that 50% of people in Latin America and the Caribbean do not have internet access due to infrastructure problems and social and economic barriers. She also stressed that adjustments are needed to reach badly connected areas within the LAC region and that for this it is important to form local networks and establish what is viable and what is not.

Betancourt pointed out that Latin America is the region in the global South where the greatest number of community network initiatives have recently been developed, particularly in countries such as Brazil, Colombia, Mexico and Argentina. This is a trend that will continue to expand to other countries, she added, due to the strengths of the communities and the high level of interest in the technical community, governments and the private sector in terms of this issue. However, she also underlined that despite this growing trend and interest on the part of different stakeholders, there is still much that needs to be understood regarding the impact of these initiatives and the challenges they face in financial, social and regulatory terms, among others.

Lilian Chamorro, from Colnodo in Colombia, defined community networks as a common good that combines physical infrastructure, data services and broadband, that is, both physical and digital elements. Communities are thus agents of their own networks in which they take an active role in terms of design, implementation, administration and maintenance. There are also a wide range of governance structures that each community chooses according to its needs. Chamorro added that people must see beyond issues of access and that the human rights perspective is fundamental.

"We have managed to connect 50% of the people, but there is still 50% who are not connected," said Chamorro, noting that the latter half consists mainly of ethnic minorities, people living in rural areas, or in urban areas but without the economic resources to pay for internet services. She noted that community networks provide an opportunity to resolve access and connectivity deficits with historically marginalised communities and represent disruptive models where there is true community participation.

Oscar León, executive secretary of the Inter-American Telecommunications Commission (CITEL), offered a presentation (via video link) regarding recommendation ITU-D19 of the International Telecommunication Union to promote connectivity in rural and remote areas. He outlined the steps necessary for implementation and provided an overview of the progress that has been made in various countries.

The representative from Argentina’s National Communications Agency (ENACOM), Agustín Garzón, said that countries must be open-minded enough to respond to all the variables that may exist. "Community networks play a fundamental role in small and remote locations, where it is not profitable for companies to provide a service and where even with state support no one appears interested. We have investment programmes for localities of less than 10,000 inhabitants, yet at times it is difficult to find any operators who want to make that final effort and provide the service," he said. He also stressed that due to the size of Argentina, it represents a good example to be used for the analysis of community networks: "In communities with less than 5,000 inhabitants, 60% do not have an ISP that provides the service, and if we consider the progress and penetration of 4G, we can see that there are many locations that simply do not have any type of internet access."

In March 2018, Argentina took on the presidency of CITEL and Garzón stressed that the promotion and support of community networks is one of its strategic areas of focus. Three community networks are now being developed in the province of Río Negro through an agreement with the Internet Society. A licensing project for community networks is also being implemented so that interested parties can get this documentation for free when requesting internet for a wholesale provider.

Andrés Sastre of the Inter-American Association of Telecommunications Companies (ASIET) also noted that one out of every two Latin Americans still has no internet connection, but added that the most important element is not necessarily the infrastructure gap. He said that we should instead focus on the socioeconomic divide.

Sebastian Bellagamba, representative of ISOC for Latin America, emphasised that in today's society, the cost for those who are not connected to the internet is growing and the urgency of connecting these sectors increases the more the connectivity gap closes. Those people who are not yet connected lose many opportunities and life becomes increasingly complex for them.

Regarding this situation, Bellagamba raised the question of what is needed to favour community networks. He first referenced the need for a regulatory policy that generates an environment that is conducive to the development of such networks (in terms of the use and distribution of the spectrum, for example). Second, he proposed the creation of technical and management skills for such networks to be self-sufficient and sustainable, providing training in terms of business models, among other aspects. And thirdly, the creation of a community of national, regional and global networks so that these can share their best practices and so escape the isolation in which they find themselves. "The deployment of technology brings benefits, so we must put people at the centre," he stressed.

Ariel Graizer, who represents the Argentine Internet Chamber (CABASE), observed that from the perspective of the operators, it is important to have clear rules and that this is a point where he believes progress has been made. He provided an example of a town within the province of Buenos Aires, with around two thousand inhabitants, that seven years ago had no internet connection. A fibre optic wholesale company passed within less than a kilometre of the town after visiting one of the six largest towns in the province, which was located around 40 kilometres away. An inhabitant of the small town decided to take the matter into his own hands and rented an apartment in the highest building in the other town, purchased internet access for that address and set up a radio link to his house in the smaller town, thus providing a connection to the entire community.

However, the person in question had not registered the transmission antenna or the frequency that was being used. The local regulator eventually received a complaint that someone had broken the law. When steps were taken to confiscate the equipment, complaints started to flood in: "You are leaving us without internet." A meeting was held with the regulator during which some said that the person who had set up the internet access should go to jail, and others said that he should be rewarded. Graizer noted that the situation is changing and there will be more clarity once the new regulation is completed, but stressed that more work is needed for the sustainability of such community initiatives, including the quality of the service provided in environments where there is no competition.

Carlos Baca, a member of Rhizomatica, a Mexican initiative considered one of the most ground-breaking experiences in Latin America in terms of indigenous community networks, commented that community networks as a movement are responding to the question of how to achieve greater connectivity in rural areas. Quoting Fernando Rojas from ECLAC, he said that the issue is not just connecting people, but thinking about how to make that connection satisfy all the related needs. He mentioned that this is not something that emerges with the internet, but that it has been around for many years, citing the cases of community telecentres and radios. Referencing comments made by Alfonso Gumucio, a specialist in community communication, Baca emphasised that those involved in community media have to constantly walk a tightrope with the danger of falling off, but are still able to sustain themselves and reach their final goal. Baca noted that community networks are in the same situation.

He added that when talking about sustainability, it is important to consider the various aspects involved. These include economic sustainability, and not only in the sense of generating projects that allow the financing of infrastructure and services, but also maintaining a staff that is dedicated to its management; institutional sustainability involving the generation of a regulatory environment and public policies that facilitate the existence of such initiatives, with the possibility of using universal access funds; and social sustainability, or rather that the structure has a strong foundation in local ways of life, remembering that the community telecentre model failed due to its lack of community anchorage. He concluded that what we need to do is learn from previous experiences and create conditions for community networks to be possible and sustainable.

The full video of the panel including comments from members of the audience is available here.