APC at the SIF: Tackling the many forms of “denial of service” to keep the internet free, open and secure

Home / News / APC at the SIF: Tackling the many forms of “denial of service” to keep the internet free, open and secure 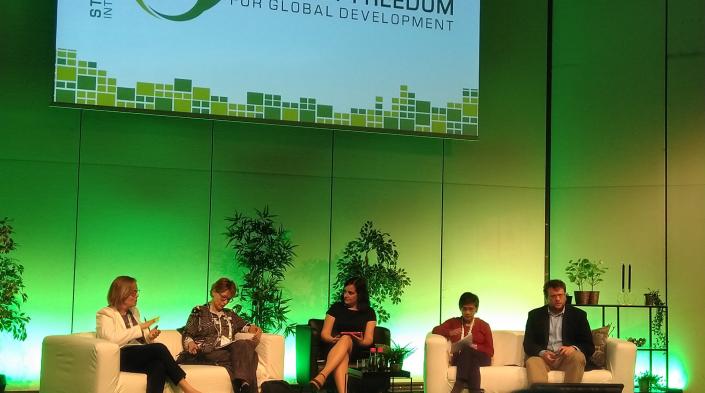 The Stockholm Internet Forum (SIF) is conceived as “a platform for advancing a free, open and secure internet as a driver of development.” Organised by the Swedish International Development Agency (Sida) every two years, it gathers together hundreds of participants from around the world and a wide range of stakeholder groups for the exchange of ideas, knowledge and collaboration. At this year’s Forum, as in years past, the APC network was actively engaged, by organising, co-organising, speaking at and participating in sessions and workshops.

The theme of the 2019 SIF was “Shrinking Democratic Space Online”, and as APC’s executive director, Chat Ramilo Garcia, pointed out in an interview with Australian community radio station 3CR, this theme is an especially timely one. “The shrinking of democratic space is obviously a growing trend around the world overall, but it is one that particularly manifests on the internet,” she noted.

She provided examples of the various ways this manifestation takes place, ranging from issues like misinformation and disinformation, to the proliferation of online hate speech, which has the effect of “pushing people out of the internet”.

Women and LGBTIQ communities are frequent targets of online hate speech, a fact that was highlighted at a SIF session co-organised by APC, “The shifting terrain of gender-based violence online”. The name of the session reflects a point raised by Chat regarding the need to expand beyond the concept of online violence against women, as recognised by international mechanisms like the UN Human Rights Council and the Convention on the Elimination of all Forms of Discrimination against Women (CEDAW), towards a definition that encompasses the violence faced by others on the basis of gender identity and sexual orientation.

One of the speakers at the session was Jac sm Kee, the manager of the APC Women’s Rights Programme. APC has worked for more than a decade to increase attention to the impact of online GBV on women’s rights: when violence forces women and LGBTIQ communities to remove themselves from online spaces, it denies them access to the potential that the internet holds for the realisation of human rights such as freedom of expression, political participation and access to information.

When it comes to combating online GBV today, one of the main challenges is the “shifting terrain” referred to in the name of the session: “GBV online is huge, yet it is really difficult to capture because it is constantly shifting, as tactics change and as technologies emerge,” Jac explained. As quoted in an article in The New Times of Rwanda, she said that this highlights the need for more research to be done to understand what GBV online really means and what it entails. “How do we define it and how do we ensure that there is access to justice? All of this requires very consistent and sustainable documentation,” she stressed.

Another way in which the shrinking of democratic space manifests on the internet is through what Chat called “denial of service”. Sometimes this takes the form of disruptions to internet connectivity, through blanket shutdowns of internet service or the blocking of social media platforms. These practices are especially prevalent during critical moments like elections, and have become more frequent alongside the rise in authoritarian regimes around the world. APC recently published an in-depth article on the troubling upsurge in internet shutdowns in Africa in particular.

However, “denial of service” also takes a less overtly repressive but equally critical form: the simple fact that half of the world’s population still does not have access to the internet, and is thus cut off from the myriad benefits that connectivity offers, including the opportunities for democratic participation that it can provide. Lack of internet access is a particular problem in remote rural areas that are simply not profitable enough to draw the attention of commercial service providers.

As APC's local access policy and regulation coordinator Carlos Rey-Moreno explained prior to the SIF, “There is significant evidence that the models that have made it possible to reach 50% of the people on the planet won't be the ones connecting the other 50%,” and this makes it crucial to begin exploring alternative models. One of those alternatives is community networks, through which local communities build and sustain their own internet access infrastructure.

In recent years, APC has focused significant emphasis on this area, including through its current Sida-funded project, “Connecting the unconnected: Supporting community networks and other community-based connectivity initiatives”. And at this year’s SIF, APC was the co-organiser of a session devoted to exploring alternative models of connectivity, “Innovative approaches to access”. The speakers at the session included representatives of a number of APC member organisations who are actively involved in the community network movement: Colnodo, Digital Empowerment Foundation, guifi.net and KICTANet. Together they explored alternative and complementary models of connectivity, such as cooperatives, common-pool-resource organisations and other non-profit initiatives.

This year’s SIF, while focusing on the shrinking democratic space online, also highlighted the fact that “the new digital landscape offers new democratic opportunities for anyone with access to the internet.” By facilitating access to internet connectivity for those left behind by the commercial telecoms market, alternative models like community networks can contribute to ensuring that more people around the world have access to those opportunities.